The problem with turning this classic into a romantic opera
was compounded, though, by the poet’s ironic outlook, and this
Tchaikovsky proposed to answer by changing the ending — by having the
two protagonists admit their love and run off together. A friend of his
sister’s took him to her garden house and, in the course of one of
those long Russian summer evenings, argued him out of his resolve, convinced
him to keep Pushkin’s classically balanced conclusion: as Onegin once
coldly, preachily rejected the ardent young Tatiana, now, years later, when
he has fallen in love with her, Tatiana coldly dismisses
him. (No record survives of that conversation in the garden house,
but what an opera it would make! — something earnest and chatty, like
Dargomyzhsky’s Stone Guest or Rimsky-Korsakov’s
Mozart and Salieri.)

In both Pushkin — where Tatiana simply states she will remain
faithful to her marriage vows — and in the opera, where a rather more
passionate debate takes place (because romantic opera requires passionate
duets, and Tchaikovsky had denied himself one in Act I), Tatiana’s
nobility in the teeth of her feelings, and Onegin’s despair, are made
far more palpable in the music-drama.

It’s interesting to compare the two Onegins — novel
and opera — to the two ThaÔs, novel and opera, brought to our
attention at the Met a few weeks ago. Anatole France was an ironist, and his
novel about a courtesan who becomes a saint while the saint who converted her
loses his faith is, frankly, a satire — in order to make a romantic
opera out of it, Massenet had to invent its characters anew, and the degree
of his success depends on whether or not you care for Massenet’s music.
(I don’t.)

Pushkin was a sophisticated romantic, or rather, he had been one in his
youth, and the plot of Onegin is his ironical view of the sort of
young man he had been (or known), and the sort of woman he had loved. His
characters are all great readers of French and English literature — he
tells us just what each has been reading (Lensky aloud to Olga) — and
their behavior owes a great deal to self-conscious affectation. Tatiana
cannot even write her famous letter in Russian — she assumes a love
letter must be written in French, her only model for such things.
(Tchaikovsky changed that, of course.) Onegin identifies with Byron’s
scarred, bored, doomed heroes even before he kills his best friend and goes
into exile — and it is Pushkin’s joke that, having traveled the
world like an aimless Byronic hero, he comes home to find he would actually
have been quite happy living on a Russian country estate with the right wife.
But she is no longer available — unlike so many society ladies, she is
monogamous, and receives his overtures with distaste. We have had a hint of
this — which Tchaikovsky retains for his opening scene — in her
mother’s recollections of the novels she used to read
(Richardson, Grandison), of the worthless man she fell in love with,
of her arranged marriage to Tatiana’s father, of her contentment with
“habit” over happiness. Like mother, like daughter: in the scenes
that follow, we see the same story play out in the younger generation. 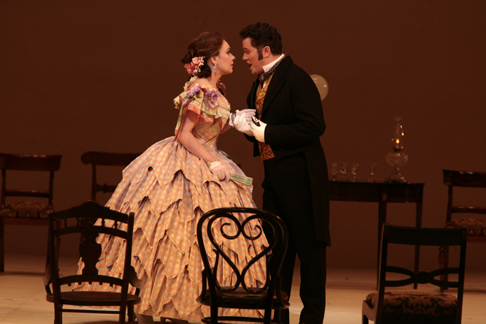 Ekaterina Semenchuk as Olga and Piotr Beczala as Lenski.

When Tchaikovsky dramatized this sixty years after it was written, as his
sister’s friend pointed out, the novel was too well known and too well
loved to alter its conclusion. At that, he had a far easier time than
Massenet in making musically romantic figures out of his hero and heroine
— because they were more romantic to begin with, or maybe he was just
better at it. Too, failing to find the proper ironic tone for Onegin himself
(he comes into his own as a character only in the last act, when he has
abandoned his posing), Tchaikovsky undercut him by making naÔve Tatiana the
focus of Act I, doomed Lensky the focus of Act II, and giving the big aria in
Act III to Tatiana’s elderly husband, a cipher in the novel. Onegin is
the odd man out in his own opera; this can make him hard to portray
sympathetically, though Dmitri Hvorostovsky achieved it at the Met two years
ago (and on HDTV telecast), appearing callow in Act I and passionate in Act
III as if he had indeed undergone a soul-transformation.

The current Met revival of Onegin, though sumptuously cast and
gloriously sung, has the flaw that Thomas Hampson is rather too old, too
saturnine, too gray — in manner and appearance if not voice — to
portray the poseur of Act I. His acting is carefully judged, his singing
suave (he’s in better voice than he was in ThaÔs, where his
affect hardly seemed that of a desert ascetic), but his grayness, his
chilliness, cause one to doubt the romantic conversion. This is not fatal in
so excellent a revival, but it does restrain one’s enthusiasm —
not least because Robert Carsen’s minimalist production all but omits
the social settings that Tchaikovsky thought so important to comprehension of
the story: we focus on the individuals, and if they let us down, there is
nothing to fall back on. I will discuss my problems with this staging
below.

RenÈe Fleming scored one of her worthiest triumphs of recent seasons in
the last revival of Onegin, but to my mind Karita Mattila is better.
If you (as I do) usually prefer one of these ladies to the other, Tatiana
will not change your mind — if you love both, you will be very happy.
As she has shown in Jenufa and Katya Kabanova, Mattila has
a particular affinity for young women troubled by romantic complications. In
the opening scene, following Pushkin, we find her buried in her book among
the birch trees, but her Letter Scene is a sensual awakening, and here the
shining metal of her voice takes on a quality, one might call it, of
adolescent idealism. This is certainly enhanced by her childish, clumsy
movements, the trembling of her hand when Onegin returns her letter, make
this a finished stage portrayal, but it is her hopeful, springing soliloquy
that thrills, makes her a girl newly awakened to love, a heroine. The woman
who appears in Act III not only moves and dresses differently, she seems to
sing with a different voice, a thicker, more mature sound, a womanly voice as
opposed to a girlish one. Both voices are beautiful, it is hardly necessary
to state — but that she has thought out how to deploy them to make us
understand two different Tatianas, girl and wife, is a feature of
Mattila’s claim to be the greatest singing actress on the lyric stage
today.

The young Polish tenor Piotr Beczala, who is having quite a winter
replacing less sturdy tenors in Lucia and Rigoletto, sang a
perfect Lensky — ardent, jejune, his mood flashing from ecstasy to
despair, with a delicious, youthfully liquid quality to his voice and even a
hint of Italianate sob. Olga usually makes no impression, but Ekaterina
Semenchuk’s attractive presence and luscious Slavic mezzo made us
notice her brief moment at center stage in the opening scene. Wendy White
sang an effective Larina, Barbara Dever a most imposing Filippyevna, Tony
Stevenson a rather uncharacterized Triquet, and Sergei Aleksashkin a stalwart
Prince Gremin without having quite the authority to overshadow the lovers in
the last act as a really thunderous Russian bass will often do. JiřÌ
Bělohl·vek led the Met orchestra in a sublime, supportive, lithely
flowing and (a few brass blooples aside) exquisite account of this wonderful
score.

So we come to Robert Carsen’s scenery-free production, on which
viewers bitterly divide. The point of its bareness appears to be to
focus the drama more closely on the principals to the exclusion of all else
— the social backdrop against which Pushkin and Tchaikovsky have
lovingly placed them, for instance. The score contains three extended dance
sequences by which Tchaikovsky unfolds the story from rural simplicity to
gentry interacting to the grand world, and these are, to say the least,
underplayed here — bored-looking peasant women rake leaves, cramped
choristers sing of the pleasure of dancing while unable to move, and against
the aristocratic polonaise, a troupe of footmen redress Onegin in court
costume, scenting his fingers and touching up his coiffure. Since the
characters are social beings, whose motivations owe a great deal to
appearances, I get Tchaikovsky’s point but not Carsen’s. True,
one does not waste time during the name-day party trying to find the lovers
in the crowd, but there is no pleasure to be seen in that cramped assembly.
The dance music is intrinsic to the opera, and it seems unnecessarily
affected not to permit dancing if the orchestra is going to play all of it.
What the staging does is not to draw attention to the principals or their
story — the opera and the singers have already done that — but to
the stage director. Did we need that? Is anything worthwhile accomplished by
it?

Still: an engrossing sung and acted Onegin, not to be
missed; if possible to be seen repeatedly.

All photos by Beatriz Schiller courtesy of The Metropolitan Opera.