Although Nicholas Hytner’s staging takes more of a ‘family
entertainment’ approach than some more psychologically searching productions,
with overt jokes and a pantomime-villain Monostatos, it is one of the
company’s greatest assets; a well-established rite of passage for many of
ENO’s promising young singers, an ideal first night at the opera for a child
or adult beginner, and the sort of show which it seemingly isn’t possible to
dislike. 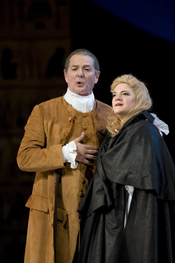 Robert Lloyd as Sarastro and Sarah-Jane Davies as Pamina

On this occasion, Sarah-Jane Davies and Robert Murray were well-cast and
well-partnered as Tamino and Pamina. Davies sang in the last revival here,
and she has become a really lovely Mozartian singer, her beautifully
controlled soprano subtly imbued with pathos and emotion. Murray’s elegant
tenor was ideal for the high-born, high-minded youth, and he was eloquent in
his delivery of the English words. It was a shame that both seemed nervous
and tentative in their characterisation.

As the Queen of the Night, Emily Hindrichs’s small, brittle and
cleanly-placed soprano was initially impressive, but in the Act 2 spoken
dialogue her rage had little sense of a noblewoman’s wounded pride, and she
came across merely as petulant and shrill. Her subsequent aria had some
lapses in accuracy. Robert Lloyd – a rare sight on this stage, having
spent so much of his distinguished career at the Royal Opera – brought
gravitas and a fatherly presence to Sarastro, with bottom notes of rich
velvet.

Jeremy Sams’s gently humorous colloquial dialogue was delivered in a wide
range of regional accents, some more real than others. In the case of the
Three Ladies (guest principal Kate Valentine and chorus-members Susanna
Tudor-Thomas and Deborah Davison) whose glamorous feather-trimmed
midnight-blue costumes demand a certain amount of upper-class bearing, the
use of various accents was a misjudgement; I wondered whether perhaps one of
the three had been unable to disguise a genuine accent, and the other two had
been obliged to affect accents of their own to compensate.

Papageno was played once again as a genial Yorkshireman by the very
likeable Roderick Williams, though through no fault of his own he had trouble
living up to his job description on this occasion. Two of the four real white
doves, whose behaviour when they appear on stage during the Bird-catcher’s
Song is usually impeccable, got uncharacteristically overexcited and decided
it might be fun to evade capture. It took an additional pair of hands and a
good two or three minutes to round them up, amid much audience mirth. The
joys of live theatre!

If the birds were intent on demonstrating the wisdom of the oft-repeated
advice never to work with children or animals, trebles Charlie Manton, Louis
Watkins and Harry Manton were here for the defence. They were quite the
finest trio of boys I can recall hearing, perfectly in tune and impeccably
vocally matched.

Conductor Erik Nielsen (Kapellmeister of the Frankfurt Opera), in his
house debut, was rather stately and mannered in a heavily Baroque-inflected
overture, but from then on his reading had a poised and even pacing that
never dragged. 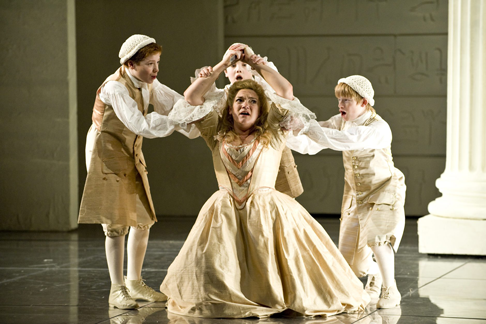 The company has been strangely quiet on the subject of whether the staging
has now been officially retired, or whether it has been granted a more
permanent reprieve. But now that opera companies have a bigger challenge than
ever in competing for audience spending power, it would surely be a waste to
scrap such a sure-fire hit as this. It keeps those doves in work,
anyway…