It
displays his virtues beautifully. But his vices, too, are part of the mix. In
Die tote Stadt we hear both the promise of his youth and echoes of
what was to come.

The virtues are clear –this is delightful music full of action and
romance. Korngold weaves genres together with ease and freedom. The Meyerbeer
segment is a joy. He connects a tradition of popular opera while alluding to
the most recent incarnation of the Pierrot story – Pierrot
Lunaire, Schoenberg’s greatest hit, a sensation before the First
World War. He references Wagner, the Strausses (Richard and both Johanns) and
plenty of Puccini, particularly Madama Butterfly, another tale of
obsessive love and death. Korngold is no ignoramus. He knows his
music history and knows his audiences will relish the allusions. The good
moments in this opera are superb, torrents of chromatic colour, sonorities so
luscious one could almost drown in their gorgeousness. 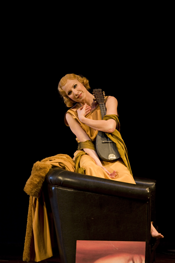 “O Tanz, O Rausch!” sings Marietta, who loses herself in the
ecstasy of dance. This mindless, instinctive surrender to sensuality animates
the opera. Marietta symbolizes life and vigour. Only she dares confront the
overpowering portrait of the dead Marie. Marie may have her moment of
vengeance but ultimately, it’s Marietta who lives on. When Frank,
Paul’s alter ego suggest they leave Bruges, Paul sings a reprise of
“Marietta’s Lied” it becomes a song of triumph, not
regret.

The message in Die tote Stadt could not be clearer. Paul must
move on if he is to survive. The past can be treasured but cannot take
priority over the future. Metzmacher
perceptively said that the opera was “like an old photograph. You
like to keep it and look at it. But reality is different”. The original
novel, Bruges la Morte, by Georges Rodenbach was illustrated with
photographs of the city, preserved forever in one moment in the 19th
century.

This performance, at the Royal Opera House, under the baton of Ingo
Metzmacher, was perhaps as truer to the spirit of the original than many
others, for Metzmacher sees it as fresh, daring and modern. This is important
because Korngold has, in the last ninety years, acquired a reputation for
backward-looking sentimentality. Audiences do like what they assume to be
tradition. In 1920, Die tote Stadt was cutting edge.
Wozzeck and Jonny Spielt auf were years away. There are
shockingly daring harmonies and clashes of key, especially in the Prelude to
Act 3. Metzmacher’s clear, incisive style doesn’t cloak the
modernity in a slush of sugar, but makes us realize just how aware and
innovative Korngold could be.

But Korngold, like Richard Strauss in Elektra, seems to pull back
from the edge. However much his admirers may champion his later work, it is
Die tote Stadt that is his masterpiece. There isn’t place in
this review for an assessment of Korngold’s career as a whole, but the
very fact that he chose this ambivalent narrative is revealing. The libretto
was written jointly by Korngold and his father, the domineering Julius
Korngold, but this was concealed until 1975. How far did Julius’ arch
conservative hand hold sway over what he son did, consciously or otherwise ?
Since the hero’s dead wife holds vampire-like control of his life, the
relevance may not be purely accidental.

The original novel is far more sinister and disturbing. Korngold instead
avoids facing the dilemmas by turning murder and madness into a dream, from
which his protagonist can walk away without reflection. Yet reflection occurs
again and again in the music and textual images. Willy Decker’s staging
makes much of mirrors, portraits, of transparent glass surface that throw
light back on the action. The “parallel reality” scenes in Act 1
are excellent as theatre, expressing the ambiguous, multi-layered duality
that pervades the music and plot. The procession scene is designed to match
the Meyerbeer scene – white costumes, masks, stylized ensembles. This
is perceptive for it expresses visually the fundamental contrast in the opera
between real life and artifice, between actors and characters. 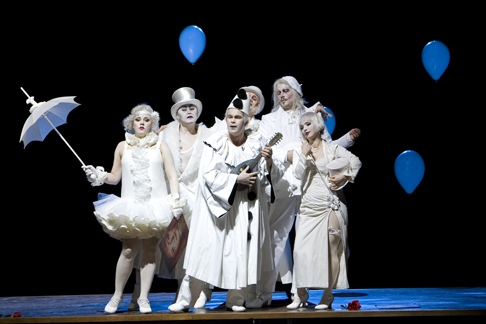 First Night nerves may have accounted for lapses in the singing, though
both Paul (Stephen Gould) and Marie/Marietta (Nadja Michael) are demanding
roles that keep the singers on stage nearly the whole evening. The range in
Marie/Marietta is fearsomely wide, so if Michael was more comfortable in the
lower register, it was understandable. Gerald Finlay was luxury casting even
though he only appears intermittently. As always, the Royal Opera Chorus was
superb.

This Die tote Stadt made a convincing case for Korngold’s
reputation. Glorious as it is, though, there are elements in it which make us
realize in retrospect why the composer would later excel in music for film.
Early movies were a kind of “extreme opera”, where music
intensified dramatic action, where emotions were whipped up even if the plots
were thin.

Korngold was writing for film long before the Anschluss, which caught him
already in Hollywood. The colourful, episodic nature of Die tote
Stadt, with its evocation of feeling, despite the weakness in the text,
is a foretaste of where Korngold was to find himself. Only a few years
previously, all movies were silent. Film music was the cutting edge of
modernity, and Korngold was in the vanguard, creating a whole new genre.

All photos by Bill Cooper courtesy of The Royal Opera House.