In recent years he has brought to the San Diego Civic Center his celebrated King Phillip (*Don Carlo*) and Boris Godunov. His appearance this season in Massenet’s little-seen late opera *Don Quichotte*, however, may be the performance that cements his reputation as an artist cherished by San Diego’s opera-loving community forever. His triumph on opening night overcame any niggles — some surely deserved — about the ultimate merit of Massenet’s Cervantes adaptation.
Even with an intermission, the performance ran just two hours and twenty minutes, evidence of the crude reduction the libretto (by Henri Cain) makes of the literary masterpiece. Act one starts with a dance, then Dulcinea warbles a pleasant aria somewhat similar to Carmen’s first number. Eventually Don Quichotte appears, only to be derided by the townspeople, and Dulcinea sends him off on a seemingly hopeless mission, to recover a stolen necklace. Act two basically consists of the encounter with the windmill, and in act three the robbers capture the Don and are about to execute him when his pathetic nature moves their larcenous hearts of gold, and they not only release him, but give him his beloved’s necklace. In act four he returns it in triumph, and Dulcinea, while grateful, has to gently let him know that she can never match his idealized picture of her. So in act five, he dies.
Ian Campbell directed this new production, with scenic design by Ralph Funicello and costumes by Missy West. Each act required curtain drops for set changes. A production with a more creative approach that eliminated the pauses between acts might not even need an intermission. San Diego Opera audiences have been known to reward traditional sets they enjoy with waves of applause, but Funicello’s designs, rather like slightly classier versions of those that might be constructed by an elite high school’s drama department, didn’t elicit much if any on opening night. The choice to have the Don and Sancho Panza wheeled on atop a horse and mule, respectively, that appeared to have been stolen from a carousel could have been a sly wink at the cartoonish goings-on; your reviewer suspects it’s all a part of the compromises imposed in trying to present naturalistic stagings of an art form that at its heart is not about naturalism. The tree the robbers tie the Don too, for example, probably wouldn’t have such wobbling branches in a film version.
Nonetheless, the artists behind the evening deserve credit, for their efforts threw into relief the greatness of Furlanetto’s performance. The singer is in fantastic shape, and physically embodied the role. More importantly, he caught the foolishness and the grandeur, the pathos and the pride. His voice, secure and full, conveyed all the romantic longing and aspirational passion of the man. And *Don Quichotte*, it turns out, is one of Massenet’s most melodic operas, with fine tune after tune. Surely with a more substantive libretto, the work would be produced with greater frequency. 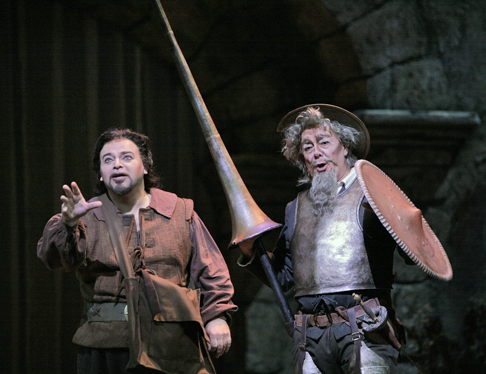 Argentinean bass-baritone Eduardo Chama as Sancho Panza and Italian bass Ferruccio Furlanetto as Don Quixote [Photo © Cory Weaver]
Denyce Graves retains the personality and stage presence on which she has built her career, but any number of other mezzos could have sung a more alluring, distinctive Dulcinea. Eduardo Chama’s Sancho Panza, on the other hand, stood his ground next to Furlanetto’s Don, capturing both the devotion and subservience of his character, and helping to make the anti-climatic final scene as effective as it could be.
The excellent conductor Karen Keltner emphasized dancing rhythms and singing string tones. A company like Naxos would do well to bring these artists together — with a different Dulcinea — for a recording.
Perhaps only an adequate opera, then, but such is Furlanetto’s success that *Don Quichotte* seems a masterwork. Anyone who can make the final performances of this short run should make every effort to get a ticket.
Chris Mullins