In the past few years we’ve seen several new productions of
this very atypical Handel opera seria and all, except this one, have
emphasised the comic elements rather than the tragic. Perhaps it’s because
the story of Queen Partenope and her warring lovers is on the slight side,
and there is no obvious heroic choice or battle to confront — just the
question of who should end up in whose bed. So far, so soap opera.

But even soap operas need more than romantic liaisons, and Handel knew
that — especially as at the time he wrote Partenope (five years
before the better-known Alcina) he was struggling to re-establish
his status with some lesser-known singers. He introduced many new musical and
dramatic ideas to woo back his public, but he also had to work with some
artists of more limited accomplishment than he was used to. It is a tribute
to his artistry that the first fact effectively disguises the second.

The story is the usual mix of romantic betrayal, cross-dressed disguise,
and misunderstandings. Pierre Audi imagines Partenope (Christine Sch‰fer,
edgy, brittle, petite) as a wealthy socialite, ensconced in her American West
Coast beach-side villa, surrounded with her lovers and their friends, served
by a slightly mysterious butler, Ormonte (Florian Boesch, smoothly camp) and
assorted hangers-on. They live an empty, artificial existence fuelled by sex,
drugs and champagne (and the services of their personal trainer) to stave off
the most dreaded threat of all: boredom.

But suddenly everything changes when her current favourite, Arsace, (David
Daniels, tanned, trim and buffed) becomes aware that the latest guest to the
party is his ex-fiancÈe Rosmira, (Patricia Bardon, as ever perfectly
ambiguous) disguised as a man, Eurimene. Rosmira is out for revenge, of the
most subtle and cruel kind, and from that moment on it is around Arsace that
the whole opera revolves, as he is sucked in, smashed, and spat out again
from this emotional vortex. There are two sub-plots involving another
high-roller, Armindo, (Matthias Rexroth, handsome, stolid) and a slightly
shady outsider, Emilio, (Kurt Streit, macho bike gear to the fore) who both
covet Partenope’s favour, but it is the Arsace-Rosmira-Partenope triangle
that is the powerhouse of this production. 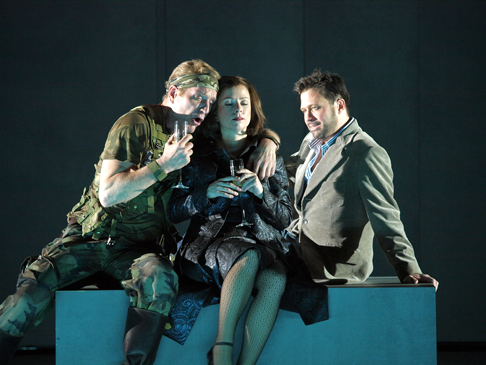 The whole opera is set in Partenope’s villa and between them Audi and
set designer Patrick Kinmonth have created a most effective and intriguing
space. Huge blocks of grey wall swivel on both the horizontal and vertical
axis, rotating and metamorphosing into new rooms and passages. We glimpse
pools and lawns upstage, and second floors are reached by ingenious stairways
that mutate into windows. Lighting by Matthew Richardson is equally effective
and mood-enhancing. The only off-note is a strangely-sloping apron above the
orchestra pit — which on occasion has the effect of cutting off the
singers’ feet from the parterre audience’s view and causing some obvious
physical difficulty to Sch‰fer in particular, who wears dangerously high
heels for most of the opera. Perhaps that explained her continual expression
of worried vulnerability. There was no such physical difficulty for the rest
of the cast: their costumes were very much modern “chic tat” – much
leather, torn designer denim and expensive trainers — and there was
evidence of long, detailed rehearsal in the slickness of their moves and
interactions. The mock battle scene became a parody of itself — an ironic
nod to the recent “combat fatigues and machine guns” genre of baroque
opera stagings — with the characters enjoying a paintball style warfare
game that only briefly suggested real danger. It’s musical impact was
however real enough with some powerful work from the brass and winds.

In the pit, Christophe Rousset (at the harpsichord) led his experienced
band Les Talens Lyriques with sure-footed verve and impeccable style
throughout. This was not surprising, given their reputation, but a pleasant
relief given some period bands’ apparent difficulty with intonation from
time to time, especially with the dreaded natural horns. No such problems at
first night — despite the wintry conditions outside and the oven-heat
within. Tempos were non-controversial, line and attack sans pareil. 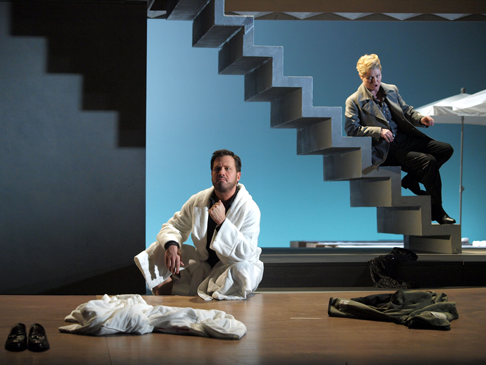 Vocally, this first performance was patchy, and it was soon obvious who
had got it right and who might need a re-think. In the title role Christine
Sch‰fer sang correctly but without particular passion or gaiety, a strangely
constrained performance that didn’t convey the sheer magnetism of Partenope
the man-eater. The role has few slow, thoughtful arias, (Care mura
is only an arioso) and her music can sound rather similar, so it is essential
that the singer makes the most of this element of the character, despite any
directorial view pushing it elsewhere. Having said that her Qual
farfalletta and Io ti levo were convincingly sung.

In contrast, Handel wrote for the anti-hero Arsace some of the best and
varied music of the opera. David Daniels was constantly impressive in his
finely judged expressive singing, his innate baroque style, and his total
immersion in one of this opera’s few characters that actually go through
any significant emotional journey. Some of his colleagues could usefully
study his use of the eyes to hold an audience. His coloratura work in the
rage/despair aria at the end of the second Act, Furibondo spira il
vento was scintillating; his eloquent and delicately original
ornamentation in the melting Ch’io parto in the third a reminder
of why he is the world’s first choice in these roles. Equally proficient
and emotionally-charged was Patricia Bardon’s Rosmira/Eurimene — here is
another singer who, like Daniels, understands the genre, and has the
technical brilliance and dramatic skills to convince in any director’s
visual world. Her character’s wounded pride and twisted love were
impeccably portrayed. Io seguo sol fiero worked particularly well
with the oboes and horns of Rousset’s orchestra. Her male impersonation
throughout was well-judged to suit the requirements of the story.

Almost but not quite matching these two was Kurt Streit, more at home in
Mozart than Handel, but well-versed in this particular role. His ringing
tenor and athletic poise was as upfront as his biker-gear and he obviously
enjoyed his brief forays upstage on the Harley-Davidson that lurked
menacingly, it’s gleaming chromework a latent threat throughout. In
contrast to the polite purr of the machine however, it occurred that someone
might suggest that he moderates his decibel level — the cosier
confines of the Theater an der Wien don’t need tenors to bounce off the
walls. 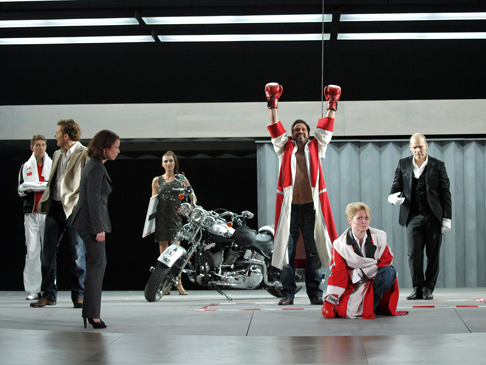 In this production the other alto role of Armindo was taken by the young
German countertenor Matthias Rexroth. Some of his music was cut and he
therefore had less opportunity to make a strong vocal or dramatic impression.
What we saw and heard was adequate, but tending to the wooden at times. In
this version his character does not win the lady (at least we are left
presuming so) and we are not surprised. The butler Ormonte was characterfully
sung and acted by baritone Florian Boesch, who made the most of the
ever-present “ring-master” role and who, in the end, actually referees
the denouement of the whole opera — the “fight” between Arsace and
Rosmira-as-Eurimene.

It is this finale which cleverly encapsulates Audi’s vision of
Partenope’s latently violent world: the confrontation becomes an actual
boxing match set inside the villa, complete with ropes, hanging microphone,
glitzy scorecard girls and the protagonists in lurid red and white towelling
robes. The watching characters seem to hold their breath as Arsace makes the
winning blow: his opponent must fight, like him, bare-chested (and thus
betray her sex). This cruel twist breaks her spirit, and reveals all the
treachery and immorality lying beneath the sham glamour of their lives.
Handel’s final chorus is oddly abrupt and Audi leaves us wondering whether
any of them will ever love each other again. No heroes here in Vienna, just a
baroque opera for the 21st century, and none the worse for it.

Handel’s Partenope at the Theater an der Wien, Vienna,
Austria. Remaining performances on 25th, 27th Feb.
(T.Wey as Arsace on 27th only), and 1st, 4th
and 6th March.