The term Bel Canto, historically associated with operatic
singing, is essentially easy to define; however, as of late it has come to
represent something other than its initial connotation. “Beautiful
Singing,” is not simply the manifestation of a beautiful sound, but an
actual aesthetic singing method that has been passed along from its early
masters to those singers who choose to execute it. But, have we become
obsessed with the “beautiful sound” rather than the aesthetic concept of
Bel Canto? Is making beautiful sounds enough to ensure the
verisimilitude of Opera?

On February 4th , the performance of Rigoletto at the
Metropolitan Opera began with an announcement that on the eve prior Italian
tenor, Giuseppe Filianoti, had spontaneously filled in for Mr. Rolando
VillazÛn in the role of Edgardo in Lucia di Lammermoor, opposite
Anna Netrebko. A significant feat for any well-seasoned professional, the
announcement that Filianoti would sing back-to-back performances and continue
with his scheduled performance as the Duke in Rigoletto was met with much
applause. 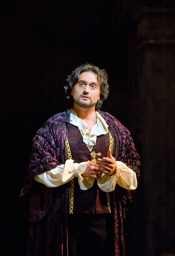 Giuseppe Filianoti as the Duke

Debuting with Rigoletto, young Italian conductor Riccardo Frizza
handled the Metropolitan Orchestra well, if perhaps lacking some of the
necessary vibrancy required of Verdi’s scoring. At times, the
tempi were held much too strictly and were devoid of
rubato, that when used tastefully in middle-period Verdi can assist
singers in carrying out pure Bel Canto singing. While tentative at
first, Maestro Frizza settled into a more dramatically charged orchestral
character by Act III. The swells in the storm scene, however, could have been
more substantial, especially in a scene where Verdi employs the use of the
human voice as a natural device, the howling wind of the storm. Chorus
Master, Donald Palumbo was magnificent in his direction of this chorus that
was the foundational support of the production. 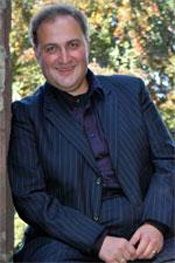 Georgian Baritone, George Gagnidze, whose singing was the most accurate,
aesthetically pleasing, and dramatic was promising in his portrayal of
Verdi’s hunchback. His Rigoletto was both pathetic and sometimes sinister
in his vendetta. In scenes his with Gilda, portrayed by Polish Soprano,
Aleksandra Kurzak, the dramatic effectiveness of his singing faltered and
several scenes became stagnant, if not all sounding the same. Gagndize began
to tread the line between reality and the other in Act III, with his most
dramatic singing and acting at the point when Gilda is discovered in the
sack. A lovely, baritone with colore brucciato, Gagnidze carried the
brunt of this production on the merits of his talent.

Soprano, Aleksandra Kurzak possessed a beautiful, clear voice, if not too
clear for Verdi. Because Gilda is young, she is often portrayed by a
coloratura lirica; historically however, Verdi’s orchestral palate
and the dramatic penchant of his writing would require a fuller voice that is
capable of high tessitura and yet broad enough in the middle registers to
mesh with the orchestral thickness of Verdi’s middle-period writing. Ms.
Kurzak’s voice was even soubrette-like and much too light in contrast to
Filianoti’s full dramatic tenor and Gagnidze’s burnished Baritone. Her
Caro Nome left much to be desired. Unfortunately, Maestro Frizza was
not helpful; almost painfully strict, he did not allow any semblance of
stretching, rubato, or colorito. In fact, it resembled
early Mozart more than a middle-period work of Verdi. If a voice of this type
were to sing Gilda, it would be to implement the bell-like quality of the
notes in the higher tessitura; however, Ms. Kurzak lacked squillo in
her upper range, presenting her with difficulty in the final
fioriture of Gilda’s cadenza. Unfortuantely, she also lacked
fullness in her middle register, a likely cause why Mr. Gagdnize’s scenes
with her affected his own vocal colour. While producing some lovely sounds
throughout, dramatically Ms. Kurzak failed to add any electricity to this
production. 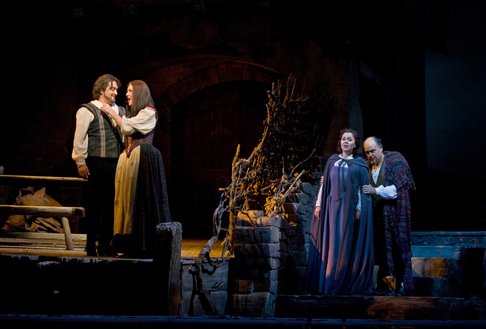 A scene from Rigoletto with Giuseppe Filianoti as the Duke, Viktoria Vizin as Maddalena, Aleksandra Kurzak as Gilda and Roberto Frontali in the title role of Rigoletto.

Mezzo-Soprano, Viktoria Vizin, was highly effective as Maddalena, exuding
just the right amount of sultriness. She was dramatic and illuminated the
stage perhaps more than her colleagues, and possesses a rich mezzo that is
well suited to the Verdian palate.

While the majesty of the Met always remains, this production was not one
of its most memorable. A young cast of promising talent is always exciting,
however the shift in aesthetic understanding is equally noticeable. What
would a Rigoletto have been like 40 years ago or even in 1851?
Historically speaking, opera is an art of old and its aesthetic properties,
even if set modernly by present-day artists, should remain as they were
intended. Verdi’s hunchback is perhaps the character to whom he related the
most for a number of reasons; yet, this production lacked the dramatic
penchant that even one glance at the score makes blatantly evident.

“Careful,” might seem the word of the day. Taking the risk of making
an audience believe that what is occurring on that stage is a reality in the
midst of a larger one is becoming more and more sparse. Swallowed by the need
to make a “beautiful sound,” the risk of dramatic intensity is
flickering. Is removing the portamenti that are essential to Bel
Canto, and singing strictly on the beat the way to create drama or
remain historically accurate to Verdi’s aesthetic? If we continue to cater
to the “beautiful sound” alone, the art of opera cannot remain true to
its historical ancestry. It would be the desire of any spectator to hear a
few sounds that were not as beautiful, at the behest of dramatic efficacy.

All production photos by Cory Weaver courtesy of The Metropolitan Opera.