It features
three main characters: Lucrezia Borgia herself, Gennaro the tragic hero (tenor) who,
unbeknownst to all but Lucrezia, is her son , and Maffio Orsini, Gennaro’s very, very,
close friend who—tellingly?—is sung by a contralto.

The opera features a particularly unbelievable story based on unlikely premises which
steer the protagonists into artificially dramatic situations that bear the least
possible resemblance to reality. As per usual with Italian opera of the time, a series
of unfortunate events/conspiracies/oaths leaves the dramatis personae in life-and-death
scenarios where one or more of them die only to turn out to have been the murderer’s
daughter/son/lover. If you’ve seen one, you’ve seen them all. Rigoletto and
Il Trovatore, as slightly more sophisticated examples of the same idea,
send their regards.

Of course operas like Lucrezia Borgia are not popular for the inane story linews
that make the average MacGyver plot look new and sophisticated. Nor is the repetitive
music, worthy of a third rate Sicilian Oompah band, the draw either. For one, every
scene takes three times longer than necessary because everything has to be spelled and
trice repeated with Donizetti unwilling or unable to express any emotion in music. He
has but three modes: regular, powerful (loud), and ‘ominous’ (fast string tremolos):
it’s like painting with just three colors. Schubert can put the world's emotion
in one tiny song… Donizetti, working at the rate of Lucrezia,
couldn't put four emotions into an opera the length of Parsifal. Being premiered
just six years before Verdi’s Oberto, it’s no coincidence that the music of
Lucrezia sounds like very early (and very bad) Verdi

The real draw is solely the achievement of the soprano in the title role for whom the
opera’s  vocal high-wire act the opera is one massive vehicle. Everyone in the
audience waits through the entire second act for the very last five minutes (taking
Orsini’s “Il segreto per esse felice” in the passing) when Madamma Borgia has her
gratuitous vocal coloratura moment where the singer—given sufficient ability—has the
opportunity to burn off a display of fireworks that seems nearly superhuman. The
inevitable roaring approval from voice fetishists  – usually from the second
tier upward) –  make the impression of an old fashioned freak-show, albeit in a
fancy setting, inevitable.

The Bavarian State Opera has Edita Gruberova for the title role, who is worshiped in the
few towns—Munich, Vienna, Zurich— where she regularly performs. The primadonna
assoluta is still a bel canto monster at almost 63. Although the soft hue of
her voice is worn down a bit, exposing a touch of harshness, she still indulges in all
the highest pianissimo notes she cares to, letting them swell to a piercing forte with
ease. 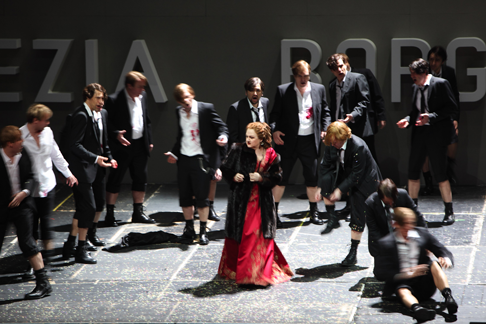 The direction of Munich’s Lucrezia is by Christof Loy, who was named Director of
the Year 2008 by the German magazine Opernwelt and is a frequent collaborator
of Gruberova’s. His staging—or lack thereof—strips the opera of anything resembling a
set. A raked floor and a bright white backdrop with neon-letters spelling out “Lucrezia
Borgia” (Gennaro rips the “B” out, when he assaults the Borgia’s coat of arms: “Oh
diamin! ORGIA!”) is all there is, apart from a few chairs. Why Loy makes Gruberova take
her wig off again (she does so to great effect in his Munich Roberto
Devereux) isn’t quite clear. Her three costumes could, with some generosity, be
construed as the multiple personalities that live within Lucrezia. The audience booed—as
is good tradition, but the minimalist approach struck as refreshingly uncluttered.

The chorus, Gennaro, and his five friends all run around in Pulp Fiction
uniform: black suites and narrow black ties. Only the ruffians in Act II look as if they
had been chased through the costume magazine with the mission to pick whichever corniest
1950s Verdi costume first caught their eye. The ill fitting tights in every garish color
and bad wigs were probably a clever self-referential joke of the production team, but
that joke not being shared with the viewer, it just looked dumb. Zestfully throwing
plastic wine glasses about, only for them to bounce off the floor with a hollow thud, is
an embarrassment worthy of high-school productions that I thought would never happen at
the Munich Opera.

Pavol Breslik as Gennaro and Alice Coote as Maffio Orsini made the most of their duty to
pass the time between Gruberova outbreaks. Their tender duet—two men acting like a
loving couple, played by a man and a woman—was a dramatic highpoint. Franco Vassallo’s
smooth bass mastered Don Alfonso’s part agreeably. Loy’s team consists of lighting
designer Joachim Klein, Barbara Drosihn who is in charge of costumes, and Henrik Ahr,
responsible for the set. Bertrand de Billy’s conducting didn’t go beyond supporting and
cuing the singers, but then he had nothing to work with, musically.

[This review first appeared in Seen & Heard. It is reprinted with permission of the author.]

All photos by Wilfried Hˆsl courtesy of Bayerische Staatsoper