A half-drawn stage curtain revealed plush,
red velvet upholstery, illuminated by the golden glow of balcony lights,
elegant tabs extending into the auditorium space. The designs effectively
emphasised the architectural heritage – the current building is the
third theatre on this site; the first, the Theatre Royal, having been opened
in 1732 by the impresario, John Rich, who also staged the first performance
of John Gay’s Beggar’s Opera at his theatre in
Lincoln-Inn-Field. However, in the light of this, it was perhaps an
unfortunate choice to have actress Sirena Tocco, in the role of the Beggar,
dressed as an ROH usher … what does this suggest about ROH wages?
Closer inspection of the ‘lavish’ set exposed deliberate signs of
structural decay – the ominous cracks and crevices a warning perhaps of the
fissures in the ‘concepts’ behind this production.

Despite the visual ingenuity (and indeed, the sets by Kimm Kovac and
Andrew Hays vividly and convincingly conjured an appropriately seedy air, as
we visited Peachum’s off-licence, a lap-dancing club and a jail) what
followed on the stage was decidedly less impressive. While musical standards
were generally high, the acting skills of these professional opera-singers,
dressed as modern-day prostitutes, pimps and villains, left much to be
desired. Indeed, at times there was more life in the cardboard
‘audience members’ that gazed, one-dimensionally down from the
balconies looming above the stage.

Australian director, Justin Way, directing his first opera in the Linbury
Studio Theatre, aimed high but missed his target by miles. If ever the time
was ripe for the whole-scale transportation of Gay’s satirical
masterpiece from the eighteenth century to the modern age, surely this is it.
With the headlines telling lurid tales of alleged bribery in the House of
Lords and exposing the self-interested schemes of unscrupulous city bankers,
amid the shock of rising unemployment and house repossession rates, this
‘low-life opera’ can still hold up a telling mirror to the greed
and corruption endemic in today’s world. Yet this pedestrian
production, translated from the taverns and brothels of London past to the
sex-shops and red lights of modern-day Soho, lacked punch and grit, missing
the obvious opportunities to lampoon and caricature the ‘great and the
good’.

Two of the major flaws in this production were inconsistency and
incongruity. Gay may have successfully ‘borrowed’ assorted airs
and songs from his contemporaries – including Handel and Purcell, only to
ridicule them in the process – but this untidy assemblage of sundry
ideas lacked coherence. Furthermore, although Britten’s revisions are
innovative and interesting, such a complex harmonic and rhythmic treatment of
the ‘folksong’ originals did not concur with any of Way’s
jumbled ideas, and simply aggravated the muddle.

Similarly, the cast formed a motley crew, a wearying confusion of types
and epochs – chavs, skins, Goths, lager louts – among whom the Beggar
wandered, aimlessly but apparently angrily, her gestures and movements adding
little to an already confused concept. 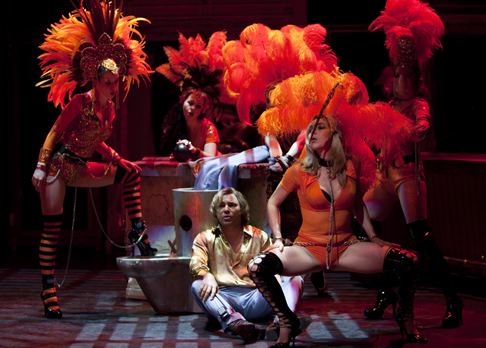 The amateurish acting, straight from the village hall, was exacerbated by
the fact that there is simply so much dialogue to get through in this ballad
opera. Gay wrote his piece for actors who could sing; this production gave us
singers who can’t act. Unconvincing soap-opera stereotypes, the cast
adopted ‘Mockney’ accents, an uncomfortable idiom for the
antiquated diction, which was delivered woodenly and unconvincingly. They
seemed distracted by their pseudo-erotic costumes, the female chorus writhing
embarrassingly in their peep-show booths, and were left drifting in the
absence of meaningful choreography, or even basic stagecraft. When they
weren’t wanted on stage, they climbed into the faux dress-circle and
passively observed the events. Most frustratingly, moments of superb
music-making were sadly destroyed by the jarring return to lengthy passages
of confusing spoken text.

At least one could close one’s eyes and listen to some glorious
singing. Tom Randle, as Macheath, presented a perfect ‘lovable
rake’, his warm, smooth tenor bringing out the lyric simplicity of
Gay’s airs, though his acting was little better than the rest of the
leaden cast. The Peachums were a convincingly criminal clan: in particular,
Leah-Marian Jones relished Polly Peachum’s uninhibited strutting, and
made an engaging foil to Sarah Fox’s Lucy Lockit – although both
conveyed a vocal tenderness and sweetness that belied their dramatic
stridency. The laughs were supplied by the ‘old guard’ – Susan
Bickley (Mrs Peachum), Jeremy White (Mr Peachum) and Donald Maxwell (Lockit).
And, despite a pre-performance announcement that she was suffering from a
severe sore throat, mezzo-soprano Frances McCafferty was a superbly grotesque
Diana Trapes. 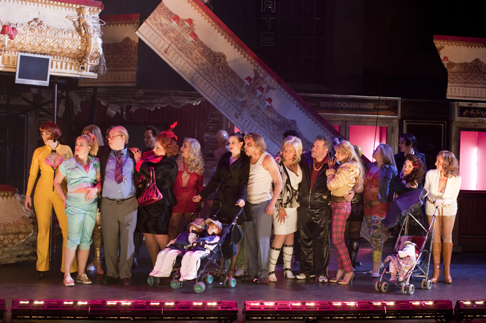 A scene from The Beggar’s Opera

But, the trouble was, quite simply, that it was all far too middle-class
and ‘nice’.

Scottish-born Christian Curnyn, standing in for the late Richard Hickcox
and making his ROH debut, led the musicians of the City of London Sinfonia in
courageous style, striving in vain to inject some energy into this flagging
show. His vigorous gestures, fully visible to the audience via the
oddly-positioned stage screens, did draw some excellent ensemble playing from
the twelve-piece chamber orchestra; and the challenging obliggato
solos were delivered with confidence and Èlan.

The final verdict? More pantomime than parody, more Gilbert and Sullivan
than Brecht … and more boredom than bite.

All photos by Johan Persson courtesy of The Royal Opera House