And what an improvement it was — the fundamental difference being that
the most important roles were strongly cast. As Leonore, Elizabeth Connell
wielded her steely-centred soprano with a confidence that was equal to the
dramatic demands of the role without compromising on lyricism and good
classical technique. Her physical characterisation was less convincing; her
Fidelio was introverted, diffident and tentative until it came to the critical
moment of the rescue. Leonore must surely have had to be convincing enough as a
strapping youth to convince both Rocco and Marzelline of her credentials; here
she never quite disguised the persona of the desperately worried wife.

The tenor Jeffrey Lloyd-Roberts sang Florestan; his voice is oversized in a
small hall, but this only heightened the impact of his emotionally powerful
performance. The commitment in his singing was second to none, even if it made
his vocal delivery rather ragged around the edges. Without the benefit of a
fully staged production, it was his performance which brought to life not only
the character but the whole scenario.

The interplay between Rachel Nicholls’ Marzelline and Andrew
Staples’ Jaquino drew affectionate laughter from the audience.
Staples’ delivery is lucid and direct, while Nicholls soprano is perhaps
overly rich and creamy for this role but a gorgeous, bright sound
nonetheless.

Richard Wiegold, a young singer still, had the fatherly demeanour for Rocco
and an attractively projected bass.

The weak point, I’m afraid, remained the baritone James Hancock (the
company’s founder) as Pizarro. Although Beethoven gives him comparatively
little to sing, thus limiting the impact of his performance on the concert, his
blustering, characterless singing in imperfect German could not help but be
shown up by the high-quality surrounding cast. Surely there is a major flaw in
his strategy here? 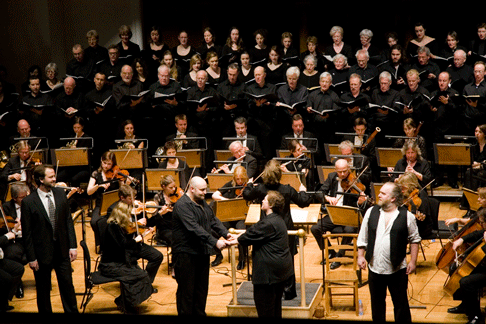 The young conductor Madeleine Lovell was polished and assured in her
direction of the Royal Philharmonic Orchestra; the overture was robust and
lyrical, the arias sensitively accompanied and the big dramatic climaxes
powerfully realised. The collective vocal strength of the Philharmonia Chorus,
galvanised by Cambridge’s Queen’s College Chapel Choir, gave them a
pleasingly ‘operatic’ timbre so often missing from concert
choirs.

It was certainly in a different league to that very disappointing Dutchman,
better on almost every level.