The dearth of grand Verdi sopranos and tenors from the current
opera scene does not deter. This has led to some somnambulistic Aidas in recent
years, but the current revival, spiffed up and to an extent restaged by Stephen
Pickover with new choreography by ABT’s Alexei Ratmansky plus a new
conductor, Daniele Gatti, makes it a more satisfying evening than many
Aidas of recent years. To top it off — this should be basic, but
in fact it’s rare — five good singers with great big voices perform
the leading roles. How often does that happen?

One detail may indicate how rethinking little things can improve a whole
performance. Act IV, scene 1, the Judgment Scene of Aida: Amneris sits
stage front, all headdress and nerves — the man she loves, Radames, is
just offstage, on trial by the priests for having betrayed Egypt. Not
coincidentally, he has also betrayed Amneris, his fiancÈe, for love of the
slave girl Aida, secretly daughter to the Ethiopian king. Three times, high
priest Ramfis reads the charges … and Radames refuses to reply.
“He does not answer,” Ramfis says, and the priests cry,
“Traitor!” — to which Amneris responds with rising hysteria,
ever more desperate to save the man she still loves — who is condemned to
burial alive. A brief drum roll crescendo covers the space between each of
Ramfis’s questions and the bald statement: “He does not
answer.” Verdi assumed conductors would understand the excitement of the
moment … and hold onto it as long as they could. James Levine used to
drive me crazy at this point, always jumping the gun as if, knowing Radames
isn’t going to answer, he saw no reason to wait for it. The reason to
wait is because it’s drama — tension in the theater is gold, never
something to toss heedlessly away.

In the current run, Daniele Gatti sits on those brief pauses over low
timpani rolls for several jittery seconds, giving us time to sit up and chew
our nails. Dolora Zajick, the Amneris, clutches an idol and twists her jewels,
and we get the little jolt just as Verdi planned. Sweet. 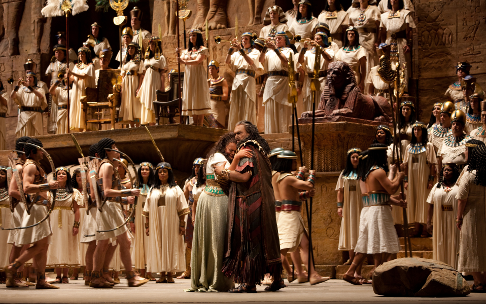 This makes up for some scrappy work from Gatti and the orchestra elsewhere,
ill-balanced horns blaring in the prelude, a flute coming in a bar too early in
the ballet — is the Met bored with this opera? They’ve given it
over eleven hundred times and last Columbus Day (or Verdi Day, as William
Berger has suggested it be renamed, to honor the composer’s birthday on
the tenth) the Met was playing to a packed house. There was, however, a sense
— on the third Aida of the run! — that Maestro Gatti had
not settled matters of tempo with his singers or was still changing his mind.
Phrases were sometimes rushed when the singers seemed to wish to linger, or
held back while they barreled ahead. Johan Botha’s Radames did not find
the music waiting for his voice on his Act III entrance and had to hurry along
to catch it up. Also, though this is not Gatti’s fault but director
Pickover’s, during the triumphal procession of Act II, the many squadrons
of soldiery marathoned past Pharaoh at such a pace that there is no time to
pause to bow to their sovereign on the reviewing stand. Were I the king,
I’d send the whole lot off to the papyrus mines.

Despite these lapses, it was about as solid an Aida as may be heard
on these shores nowadays, the sets monumental as ever, the enormous Met forces
appearing even more numerous than they were (two horses lead the procession,
plus another to pull the chariot), the five leading roles sung by big voices,
each well able to fill the enormous room. 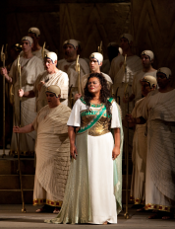 Violeta Urmana, the night’s Aida, has a sumptuous soprano with a warm
glow to it — she doesn’t have to push to flood the house with
sound, and she glides into lovely piano phrases of nostalgia for Ethiopia or
when fading to death in the tomb. These perfect, purling phrases are not always
to be depended upon, however — a line or two of “O patria
mia” peeled paint and elsewhere she dipped into flatness, and she
sometimes ran out of breath on a high note. Then, just as you thought
she’s simply a soprano with a “short top,” she launches a
flawless legato over the very roof of her range. Aida is a long role with a lot
of high floating notes alternated with deep descent, and the leaps in dynamics
from one emotion or range to a contrasting one, and these abrupt alterations
appear to trouble her. Still, for long stretches of the night, she was the big,
beautiful Aida the world yearns for. 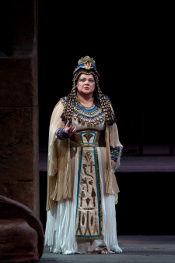 Dolora Zajick has sung seventy Amnerises at the Met — if the company
still went on tour (and didn’t the provinces always demand
Aida?) she’d be neck and neck with the champ, Louise Homer, who
sang it ninety-seven times from her debut in 1900. Zajick’s clarion mezzo
still soars, wobble-free, and in the Act II concertato she is louder than the
massed populations of Egypt and Ethiopia. One wishes she could change costume
to suit the change in mood between Acts III (wedding night) and IV (crisis),
but the production now subsists on two intermissions instead of three, and
probability must be sacrificed.

Johan Botha has both the voice and the girth to keep his ladies in their
places. His fresh, stalwart, graceful singing is just a bit unvaried for some
tastes, but I can’t remember when I last heard “Celeste Aida”
sung or phrased so beautifully — that is, until the final fading
pianissimo, which concluded in a bobble that, one fears, defused an impending
ovation. As mentioned above, he began his love duet a measure or two late, but
otherwise sang it persuasively if lacking dramatic fire. Verdi’s music
may require a more throbbing emotional urge, and may not be quite as ideal for
Botha as Wagner’s Walther or Strauss’s Apollo. Still, in so big and
vocal an opera as Aida, it’s a pleasure to hear a tenor so well
matched with his soprano and mezzo. His acting, however, is minimal and stiff,
his instincts less than sure — do we need that basketballer’s
upraised double-fisted “Yessss” when he is named to command
Egypt’s armies?

Carlo Guelfi makes a sturdy Amonasro, if a bit rough and ready — but
this is not a suave part. Roberto Scandiuzzi makes a dignified if not ideally
sonorous Ramfis. Stefan Koc·n, a debutante Pharaoh, sounds out of place and
weak among these five mature voices. Adam Laurence Herskowitz sings an
admirable Messenger.

Alexei Ratmansky has devised new dances for the ballets of Act II. The dance
for Amneris is a well-played classic pas de deux that might surprise those used
to girls in this lively bit, who thought men were barred from oriental harems
— be generous: the boy might simply be a eunuch. The ballet for the
triumphal scene fell rather on the Russian side of a compromise between
traditional ballet moves — which do seem odd in a monumental Egyptian
setting — and any attempt to be “faux Egyptian” or
“faux African.” Both dances made much of Verdi’s striking
rhythms, and the corps de ballet (as in last year’s La Gioconda)
showed what a little attention from a genuine ballet master will produce.