The set of *The Bartered Bride* comes from 1952; *The Cunning Little Vixen* was recorded in 1957. Many releases from those years offer fine sound, and in some cases (think the Mercury Living presence series), quite excellent audio — warm and yet detailed.
So the first thing to be said about these two sets must be that the recording quality ranges from poor (the Smetana) to just acceptable (the Jan·?ek). The constricted mono sound of the 1952 *Bride* recording gives the impression of a microphone set up not in the same room as the musicians and singers, but possibly just around the corner. Aural claustrophobia sets in early and never really leaves, despite the thoroughly idiomatic performance. The Prague National Theater orchestra and chorus perform under the baton of Jaroslav Vogel, all sounding spirited enough to really make it all the more unfortunate that they can’t be heard better. The singers tend to be a little more up front in the mix, and though none come across as major talents, they all inhabit their roles naturally. Fans of this opera, which never seems to have caught on very well outside its home region, may want this set for its historic value. Others would probably do best to find the opera in German on EMI, with a first-rate chorus and clean, clear sound. 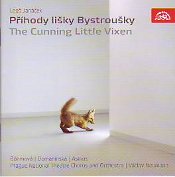 The sound quality of the *Vixen* dismays the ears initially, but this is a case where one soon adjusts and settles into the mood of the performance, putting side the qualified audio experience. That excellent conductor V·clav Neumann leads the same ensemble as in the Smetana, and here their virtuosity and knowledge of the idiom shine through. Rudolf Asmus sings a masculine, wise Forester, and Hana Bˆhmov· employs a boyish soprano to vivid effect as the Vixen.
In the slim-line cases of these lower-price editions, Supraphon provides a booklet with the usual credits and then a combination track listing and synopsis, in Czech and English. More information on the artists would be appreciated, though the lack of the usual essay retreading Wikipedia-style data on the composer and the opera prompts few regrets. The better-recorded Mackerras set of Jan·?ek’s masterpiece remains essential, but this Supraphon edition deserves a listen as well.
Chris Mullins