If it had been redesigned and
restaged by Luc Bondy of this season’s Tosca, the rising curtain
would not show us a splendid rococo bedroom with St. Stephen’s Cathedral
subtly phallic in the distance but would be placed in an underground dormitory
where three strapping stablehands would service the Marschallin whenever
Octavian took a breather. No doubt we will live to see such a
Rosenkavalier. For the moment, happily, we’ve still got the
forty-year-old Nathaniel Merrill production on Robert O’Hearn’s
sets, in which pretty much every action seems to take place synchronically with
descriptions of or references to that action in Strauss’s score. How very
Old Hat! (The hats — and gowns and wigs and uniforms — are probably
less old, actually, though still in the proper style.) 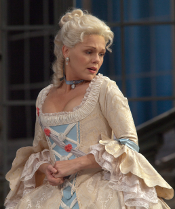 Last Monday, the production looked spiffy — how much of it is original
and not rebuilt and repainted, I wonder? — and Edo de Waart led a
sparkling performance of this most graciously autumnal of chestnuts. The comic
business may be familiar, but it went off without a hitch, from the
well-behaved lapdog and the wheezing lawyer in Act I to the dozen sword-waving
hussars in Act II to the raucous children in Act III. Stage direction is
credited to Robin Guarino, and there are some touches I don’t remember:
Did the children always mistake Valzacchi and Faninal for their Papa and have
to be rerouted? (That was funny.) Did the egotistical Singer (Barry Banks, in
full satirical glory) always trample his music in disgust when leaving the
levee? (So was that.) Did Baron Ochs always try to make out with another, more
willing maid of the Marschallin when Mariandel proved elusive? Most interesting
of all, maybe, did the Marschallin always totter about on an imaginary crutch
when daydreaming of her future, aged self? Or has RenÈe Fleming come up with
that bit in the years since she sang it last? She possesses comic chops she has
scarcely used in her prima donna career — as has been true of
many great stars.

What all this shows is the novelty that can be added, as casts change and
work out new business, even in the most traditional stagings of thrice-familiar
operas. 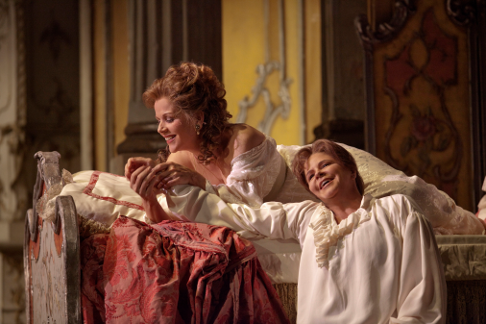 Susan Graham as Octavian and RenÈe Fleming as Marschallin

As she has approached the Marschallin’s years (allowing for inflation
of the youthful stage from the 1760s to our era), Fleming’s voice has
grown thinner, less penetrating on top but fuller, more satisfying in the lower
reaches, with less of the famous velvet cream that thrills her fans but annoys
those of us who have found her phrasing inexact. These sins were always less
noticeable in German roles anyway — Strauss keeps her on her mettle. She
was humorous here, as suits a Viennese, and maintained hauteur without
the goddess-like dimension Kiri Te Kanawa used to bring, perhaps
inappropriately, to the final scene.

Susan Graham makes a more convincing bumptious boy than she does a graceful
lady in certain other roles. While Fleming’s voice has lost some luster
on top, Graham’s I find thinner, ungraceful, in the lower reaches, more
inclined to the blundering quality of “Mariandel,” even when she is
singing Octavian’s lines. Her acting is appealing in both the amorous
scenes with Fleming and the “flirtatious” punches she gives the
Baron whenever he grabs “Mariandel” inappropriately — but the
dramatic peak of the night came when Graham and Miah Persson’s Sophie
stopped dead, half bowing, eye to eye, infatuated at first glance at the
presentation of the rose and seemed almost unable to continue in their
aristocratic ritual. 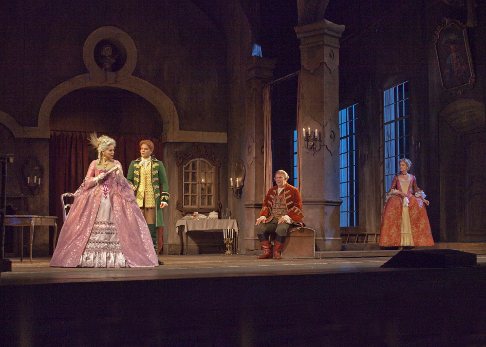 Miah Persson has a lively, energetic, easy high soprano, vocally lacking
nothing called for by the part, but she lacked for me certain ideal Sophic
qualities: there was less girlishness, less poutiness than with most. She was a
woman, not a child — but Sophie is specifically a naÔve fifteen. Her
chatter on being introduced to the Marschallin was too calm for chatter, her
breasts seemed awfully prominent and exposed for a girl fresh from a convent,
and her grin is too wide; too, she is the tallest Sophie ever to grace this
production — she has all the goods for Sophie, but she isn’t
Sophie, at least not in this production. Perhaps they play the part more
maturely in her native Sweden, a country sadly lacking in aristocratic
convents.

Kristin Sigmundsson, tall even beside Susan Graham, made a grabby, sleazy,
stingy, you-love-him-because-you-loathe-him Baron Ochs. His grainy voice is not
what one would want in a lover in any case, and both his topmost and bottom
notes were weak to inaudibility, but he inhabited the role to perfection.
Hans-Joachim Ketelsen sang a fine Faninal, less dignified than some — but
then, the man is a ridiculous snob, redeemed only because the piece is a comedy
with Mozartean aspirations. Wendy White, as Annina, and Jennifer Check, as
Sophie’s governess had the loudest voices on stage, though Jeremy
Galyon’s policeman came close.

Some of the less well-judged cutenesses that afflicted recent revivals are
gone, and the entire presentation is snappier. Either Robin Guarino or Edo de
Waart should have most of the credit, but all hands win applause.