Yet this is not an evening of dark
cynicism: John MacFarlane’s front cloths for Ravel’s L’Heure
Espagnole and Puccini’s Gianni Schicchi for — a
glimpse of busty cleavage, enticing coils of pasta — signal that
it’s earthly pleasure and not divine punishment which is centre stage in
these witty, delightful productions.

Macfarlane’s set for Ravel’s one-act gem is inspired. Frustrated
by her husband’s prim devotion to his business affairs, and longing for
more action in the boudoir, Concepcion, the frisky wife of the town clockmaker,
Torquemada, is literally confined in the false proscenium. There are many
clever touches; as when the embossed rose wallpaper and rich curtains are slyly
transformed by Mimi Jordan Sherin’s slick lighting from shop dÈcor to
bedroom draperies. Torquemada’s weekly maintenance tour of the civic
clocks offers Concepcion her sole hour of freedom, and the passionate poet,
Gonzalve, is quick to take advantage. But, on this occasion, Torquemada has
ordered Ramiro, a muleteer, to wait in the shop. The overwhelming number of
ticking clock faces reminds us of just how little time Concepcion has to enact
her plan, adding a tinge of hysteria to the frantic mood. And, there is plenty
of opportunity for farce and slapstick, as first Gonzalve and then a second
admirer, the banker Don Inigo Gomez, hide in the clocks, while Concepcion
decides to spurn both, in favour of the brawny Ramiro.

The characters are parodies worthy of commedia dell’arte
— the bloated banker, the idealist poet, the gullible youth, the
frustrated housewife — and they are clothed in suitably garish costumes
by Nicky Gillibrand. The Romanian soprano, Ruxandra Donose, is impressive as
the aptly named Concepcion, fully convincing as she grows ever-more frustrated
and desperate, and singing with superb projection. As the muscular muleteer,
Ramiro, Christopher Maltman’s bright, golden sound is perfect. Maltman
bounds with puppyish energy, happily heaving and twirling grandfather clocks at
Concepcion’s whim, and showing both heft and lyricism in this detailed
interpretation of the role. The hapless poet, Gonzalve, is sung by the French
tenor, Yann Beuron, whose warm, passionate tone conjures a suitably dreamy air;
Andrew Shore delivers a typically witty and well-timed cameo as the blustering
Gomez.

Ravel’s score is rich and ravishing, almost too sophisticated for the
ribald tale it illuminates. Pappano paced it perfectly, allowing us to
appreciate how deftly Ravel eases between genres — here the lilt of a
pasodoble, now a jazzy syncopation, next a pulsing habanera. Ravel is just as
capable of musical irony as Les Six, and just as adept at pastiche and parody
as Stravinsky. This is a dense, detailed score, with castanets, tambour de
basque and sarrusophone supplementing just a few of the sounds
supplementing the large orchestral forces. Drawing exquisitely refined playing
from the ROH orchestra, Pappano reined in the forces at his disposal, never
overwhelming his singers, while allowing the details to serve the stage
incident.

A chorus of show-girls joins the cast for the final number on lust and love,
the dazzling glitz and glamour both darkly ironic and lushly entertaining: we
heed the moral, while relishing the rollick. 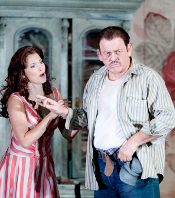 Maria Bengtsson as Lauretta and Thomas Allen as Gianni Schicchi

Long overshadowed by its tragic partners in Puccini’s triptych Il
Trittico, Gianni Schicci is a delicious satire on avarice. Buoso
Donati’s death prompts an anxious search by his presumptuous but
down-at-heel family for his will: locating it, Rinuccio demands permission to
marry the peasant girl, Lauretta, in exchange for handing it to his aunt, Zita.
All are distraught to discover that Buoso has left his fortune to a monastery,
but Rinuccio assures them that there is someone who can help — Gianni
Schicchi, Lauretta’s father. Impersonating first a doctor who declares
Buoso revived, and then Buoso himself, Schicci conjures a plan to ensure his
and the lovers’ future wealth and happiness, while the Donatis make
greedy grabs for their inheritance, torn between their avarice and their social
pretensions.

Jones gives us quite a dark reading of this score: the grimy, drab 1950s
dÈcor, complete with peeling wallpaper, broken television set and rusting
radiators, certainly enhances the Donatis’ mood of desperation. The large
cast, including children and farceurs, are expertly choreographed throughout,
in an astoundingly detailed, meticulous staging which demonstrates both
imagination and an intelligent responsiveness to Puccini’s score. Not a
movement, gesture or facial expression is misplaced: manic it certainly is, but
never messy.

The cast are uniformly superb — a convincing portrait of collective
greed. Yet each character is fully individualised through gesture. This revival
featured many of the original cast, and they clearly enjoyed themselves,
musically and dramatically. Mezzo-soprano Elena Zilio was outstanding in the
role of Aunt Zita, confident and controlled; while Gwynne Howell made for a
distinguished Simone, the head of the grasping clan. They were matched by fine
performances from Marie McLaughlin (La Ciesca), Jeremy White (Betto di Signa),
Robert Poulton (Marco), Alan Oke (Gherardo) and Janis Kelly (a hand-bag
swinging Nella). 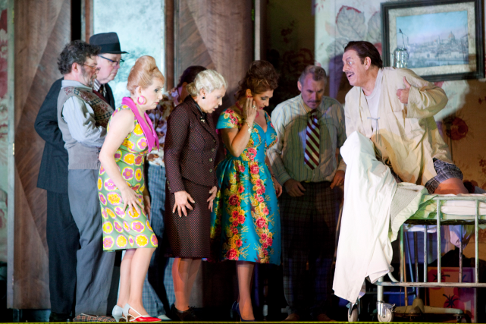 The celebrated aria, ‘O mio babbino caro’, is probably the only
number from this dazzling score which is familiar to many in the audience.
Here, rather than stopping the show, it was expertly incorporated into the
dramatic fabric. Maria Bengtsson charmed and delighted as Lauretta; her
powerful, affecting rendition was aptly supported by Pappano, who shaped the
phrases sensitively and eloquently. Bengtsson was ably partnered by the
American tenor, Stephen Costello who, as the dashing, aspiring young lover,
both looked and sounded the part, his ardent tenor ringing out warm and true.
In the title role, Thomas Allen gave a typically consummate musical and
dramatic performance.

These two stylish, clever stagings offer an evening of light mischief,
musical charm and dramatic froth. Delicious — not to be missed.