Bychkov’s was a controlled reading; but, while some may argue that he kept the leash too tight, he appreciated the need for contrast – now urgent, now relaxed. Moreover, he draw from the ROH orchestra a startling array of colours and textures, paying scrupulous attention to the exquisite details within the instrumental fabric and drawing the delicacies of the inner voices to the surface. A perfect canvas upon which to play out this drama of political violence and private trauma.
This is an opera about confrontations. From the first Fontainebleau scene – when indicatively the lovers’ triplet ‘resistance motif’ is introduced to the text, ‘The fatal hour is nigh’, against the jaunty, repetitious theme of chorus – an unremitting battle wages between Church and State, father and son, individual and society, love and duty. Such oppositions are enhanced by Verdi’s contrasting vocal roles – the bright baritone of Posa juxtaposed with the deep resonance of Philip, the indomitable fury of Princess Eboli distinguished from the vulnerability and near-hysteria of Carlos. 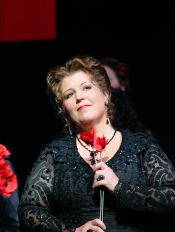 So, it is no surprise that it was the epic confrontations between the Spanish King Philip II – the real centre of this work, despite the precedence given to his son in the title – and first Rodrigo, Marquis of Posa, and then the Grand Inquisitor which were the driving force of the opera. Ferruccio Furlanetto’s Philip II is a disturbed, troubled man. His struggle with Simon Keenlyside’s Posa, signalled by an electrifying outburst of orchestral thunder, provided the first moment of chilling dramatic intensity, a shocking insight into the fire of Inquisitional Spain, where religious fervour, political zeal and personal strife intermingle. This was a masterly conception by Furlanetto, every note, every gesture placed with consummate care and conviction. He released a beautiful stream of sound which did not diminish his steely authority, convincing us that this really was the man whose very name could make all of Europe tremble. This Philip has genuine regal gravitas; which makes his demise in Act 4 all the more astonishing and affecting, as the sonorous bass, underpinned by a beautiful ’cello solo, reflects on his loneliness and despairingly acknowledges his empty, loveless marriage. Having revealed his humanity, in Act 5 Philip faces the Grand Inquisitor, in a hostile confrontation between State and Church. John Tomlinson’s ghastly Inquisitor was certainly the -physical embodiment of terror in his blood-red robes, but did not always match the ominous visual effects with sufficient vocal intimidation and menace.
Does Italian opera need Italian voices? Perhaps not, but the other members of the cast, no matter how well trained in Italian technique, or schooled in language and diction, simply don’t possess the same innate sense of the tradition. Does this matter? Keenlyside may not have a truly Italianate sound but he brought a relentless energy and vibrancy to the role, perfectly conveying an obsessive fervour which really could sway the unworldly Carlos from idyllic love to political idealism. 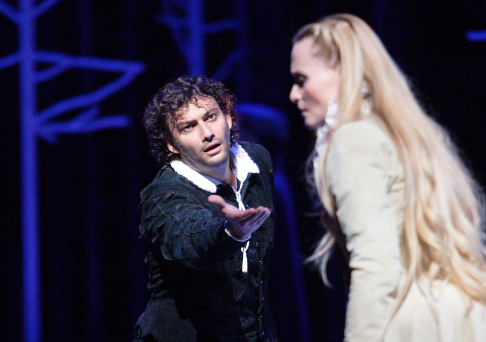 Marina Poplavskaya as Elizabeth of Valois and Jonas Kaufmann as Don Carlos
Carlos himself was performed here by Jonas Kaufmann, a baritonal tenor who looked, acted and sang the part with impressive skill, sustained musicianship and stamina. Carlos is difficult role to pin down: is he a romantic dreamer, *‡ la* Werther, or a genuine political idealist? He’s certainly come in for some criticism … while it’s probably true that all Verdian tenors commit acts which lead to their deaths or to the deaths of those they love, Carlos has been attacked for his ‘inner paralysis’ which condemns him to inaction, for his self-destructive rage and empty threats, and described as a man who is ‘incapable of coherent political thought’. Part of the problem is the change of emphasis which results from the inclusion or excision of the opening Fontainebleau scene. If it is included, Carlos appears as a man of sensibility, living in a world of inner dreams. But, in this production, Kaufmann later chose to focus on Carlos’ political idealism, an aspect somewhat at odds with the romantic dreamer of the opening; and he never quite convinced that the passion for which so much is sacrificed is genuine and not self-delusory. Kaufmann’s Carlos is easily influenced by the fervent Posa, but he seems perhaps too ready to sublimate his love for Elizabeth to the ideological principles that define Rodrigo’s existence. Their Act 2 duet, a heroic hymn of brotherhood, suffered from the similarity of their vocal timbre, the rather passive direction and a tempo that lacked urgency: perhaps the problem is that the melody that embodies the warmth of their personal friendship also has to serve as an anthem of their political commitment to the liberation of Flanders.
That said, there was undoubtedly a dramatic chemistry between the two men, and this was a musically compelling performance from Kaufmann. In scene one, when the chorus have departed and fall silent, Carlos’ line disintegrates and in a breathless wavering over a coda-like orchestral elaboration of the chorus’s theme, Kaufmann used his *mezza voce* to great effect.
Marina Poplavskaya, as Elizabeth of Valois, could have made more liberal use of this sort of well-placed, controlled *pianissimo*. Confident and powerful, Poplavskaya rode the orchestral sound well, and created a smooth line in the upper register. Her bitter tirade after the dismissal of her lady-in-waiting for neglecting her duties when the Queen is discovered alone in the garden, demonstrated her frustration and anger, but there was little light and shade in this interpretation. Marianne Cornetti has the necessary weight for Princess Eboli but the coloratura in her Act 2 Veil Aria was hopelessly imprecise and some unsubtleties in her portrayal drew some unfortunate laughs.
The large Chorus made an imposing sound; the Act 3 *auto-da-fe* scene seemed less cluttered and busy than when this production was first aired, but still created an impressive spectacle. However, Hytner’s largely naturalist reading and the period costumes were rather at odds with designer Bob Crawley’s somewhat stylised sets; the stark colours, from glaring silver of ice and birch tree in opening forest scene, to glowing red of Spanish sun glaring down on conical pine trees as women gather in piazza, evoked a fairytale ambience which did not accord with the realism of Hytner’s vision and diminished the opera’s grandeur.
Despite the frustration of hearing the text sung in Italian rather than French, this was a persuasive performance, musically and dramatically, and one which achieved the necessary balance between political epic and private passion, between the grand sweeps of history and personal intimacy.
Claire Seymour

All photos by Catherine Ashmore courtesy of the Royal Opera House