It’s doubly refreshing this season to have Miller himself
back to direct the revival, as he did last season with his Barber of
Seville. It is in the detail that his influence is visible; the character
inter-relationships are complex and clearly drawn, and for the first time I can
recall, James Fenton’s classic translation is delivered in
authentically-accented New York-ese instead of generic English RP. It all makes
a difference.

The sets are looking a little dated (recreating the shapes and colours of
the 1950s through 1982-tinted spectacles) and the lighting could do with a
revamp. Both the backstreet outside Rigoletto’s tenement block and the seedy
riverside bar where Sparafucile makes his nefarious living are reliant upon
lighting for their atmosphere, and at the moment it’s all looking a bit dull
and disinterested. But it remains a strong, tightly conceived show, with
seemingly plenty of life left in it. 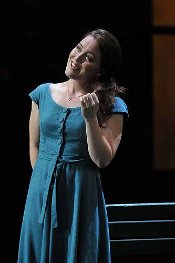 In the title role was the evening’s real star turn: Anthony Michaels-Moore,
too long absent from London’s stages and far, far too long absent from
the Coliseum. Compared with some of his predecessors in this production whose
physical presence have enabled them to dominate the stage overtly,
Michaels-Moore is much more subtle; his Rigoletto is a grubby little man with
an undercurrent of spite, embodying everything that is wrong with the world in
which he lives. And his singing is just spectacular — a masterclass in
Verdian line and phrasing.

In a trend becoming increasingly prevalent in ENO’s casting, the
conductor and two of the key principals were imported from the other side of
the Atlantic. (Don’t British singers have few enough home-grown
opportunities as it is?) As Gilda, the young Canadian Katherine Whyte is a
charming performer with a lovely limpid soprano and the ideal physique du role,
but her voice is a good couple of sizes too small for this house and these
colleagues, and instead of soaring over the top of ‘Si, vendetta’
(‘Yes, revenge’) and ‘Bella figlia dell’amore’
(‘If you want a faithful lover’) she was lost in the orchestral
texture. I would very much like to hear her in this role again (well, really
for the first time!) with one of the UK’s medium-sized companies, or
perhaps here at the Coliseum again in a more sparsely scored opera — I
see that most of her forthcoming work is in baroque and early classical
repertoire. 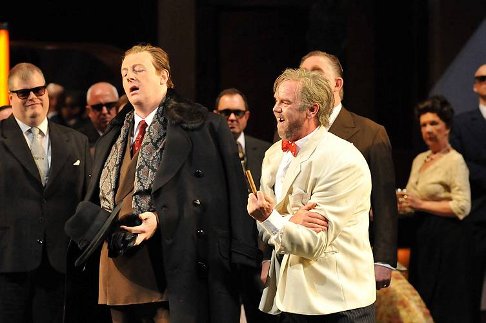 As the Duke, 25-year-old Michael Fabiano (from the USA) was a great deal
more successful; a bright, brash, virile tenor with confidence and macho
swagger in abundance. Only his very top notes had a tendency to be too
bright, almost detached from the rest of his voice.

Company regulars took the other roles, with Brindley Sherratt’s darkly
malevolent Sparafucile particularly outstanding. ENO Young Artist Madeleine
Shaw was a credible Maddalena. Bass-baritone Iain Paterson (perhaps the
brightest star to have emerged from the Young Artists’ Programme) is a
little on the high side for Monterone and he didn’t quite manage the
strength and firmness of tone which we are used to hearing from him. 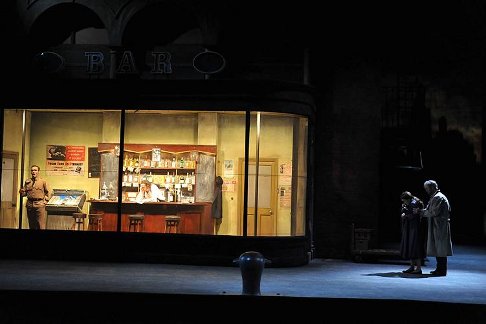 Stephen Lord, another American, conducted tautly and with brisk tempi for
the most part; the only misjudgement was allowing Fabiano plenty of rubato in
‘La donna e mobile’ (‘Women abandon us’) — not an
issue in itself, but inconsistent with Miller’s famous take on it whereby
the Duke calls the song up on Sparafucile’s jukebox.

All photos by Chris Christodoulou courtesy of English National Opera