The audience that packed 3,600-seat Dorothy Chandler Pavilion for the
September 26 afternoon event, was even more wildly enthusiastic about
Feyer’s work than it had been at the end of Rheingold and
Walk¸re that launched this $32-million project last season. (True,
there were “boos,” but they were almost totally inaudible against
the bravos heaped upon Freyer and his production team.) Yet one must ask
whether Freyer’s Wagner is as great as it seems. Has the director, whose
theory of theater was shaped in his native East Germany in Bert Brecht’s
Berlin Ensemble, really found a — if not the — key to
Wagner’s genius or has he rather created a spectacle that awes his
audience into breathless admiration?

Although Freyer is clearly a winner, the bigger question is how well Wagner
fares under his hand. Every director — even in this age of overheated
Regieoper — claims to do what the composer wanted done to
realize his intentions. Let’s start with Freyer’s most obvious
triumph: he leaves one with the desire to see the segments of this
Ring again — an opportunity that will be available when LA Opera
stages three complete cycles of the tetralolgy in 2010. Freyer brings an
immense amount to Wagner; he makes every moment an overlay of meanings
involving symbols impossible to absorb and interpret in a single exposure. Yet
his approach to Siegfried, compared to his two earlier installments of
the cycle, is relatively minimalist. The stage is uncluttered, and largely
absent are the mammoth doubles of the major characters. The staging relies
heavily on effects achieved through sophisticated lighting.

Siegfried, although rich in event with the forging of the sword,
the slaying of Dragon Fafner and the launching of the love story that will
dominate Gˆtterd‰mmerung, is by far the most difficult of the
Ring operas to stage. Wagner, viewing the four-part work as a
symphony, suggested that this third chapter is a scherzo, and that has prompted
some directors to introduce all sorts of funny-bone nonsense into the staging.
Freyer — happily — goes in another direction. Nothung, the sword,
is forged vocally without the trappings of the Village Blacksmith, and
Siegfried runs Fafner through with only a blue-lighted tube. Indeed, the dragon
that dwarfs the stage in many productions is an understated Disneyesque dwarf
in top hat. 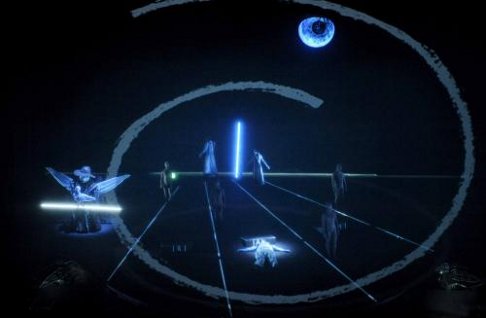 One is relieved at the removal of such hackneyed attempts at
“realism.” Freyer keeps a tight lid on the scherzo idea. Humor in
Wagner? One recalls the waggish observations that Pfitzner’s monumental
Palestrina is Parsifal without the jokes.” The one line
in Siegfried that gets a laugh in this age of surtitles is the
hero’s observation as he removes Br¸nnhilde’s armor:
“That’s not a man!” Wagner hardly expected to split sides
with that!

Young Siegfried is — like young Parsifal — a pure fool with
everything to learn and only four hours to do so. It’s a heavy trip, and
Freyer offers all the help he can in hints and images to get the hero to his
goal. It’s the goal — Siegfried’s awakening of Br¸nnhilde and
the great duet that follows – that is most problematic in this staging.
Br¸nnhilde, despite heavily incestuous intimations on the part of Father Wotan,
is still a virgin. In terms of sexual enlightenment, however, she is light
years ahead of Siegfried who has spent his early years tumbling about the woods
with only bears as companions. In the duet a huge distance is yet to be covered
in only half an hour of music. It’s here that Freyer offers so much help
that Wagner’s music suffers.

The wealth of imagery, lighting effects and those “invisible”
imports from Kabuki drama that move slowly about the stage are a study in
excess. Text is all important here, and as the curtain fell one wished for a
concert performance of the duet to underscore this fact. Freyer’s
decision to hide Br¸nnhilde in a haystack — plus a towering Afro and
billowing gown — offered little help. Indeed, although Freyer is out to
illuminate text and explain the story, he often detracts from the musical
excellence of this production. That excellence is largely the work of music
director James Conlon who knows this score note by note and has built an
orchestral second to none to do his bidding. His cast, furthermore, is without
weak links. True, John Treleaven and Linda Watson, his Siegfried and
Br¸nnhilde, are best viewed as adequate singers, who work with intelligent
sensitivity to realize Freyer’s intentions.

Superb, on the other hand, is Graham Clark’s portrayal of
Siegfried’s guardian dwarf Mime, a role to which he has claimed almost
sole ownership for two decades. As Wotan disguised as the Wanderer Ukrainian
Vitalij Kowaljow makes his mark as the most promising young singer to tackle
this role in recent seasons. Jill Grove’s Erda is definitive.

What is most strange about this Siegfried is that it is without
emotional impact — and perhaps Freyer wants it that way. His teacher
Brecht, after all, was out to put feelings on ice and make people think in his
didactic theater. The viewer is all too absorbed by Freyer’s approach; he
keeps one thinking — or guessing at least. He is demanding, and
it’s impressing that the audience responds as positively as it does. Yet
an occasional goose bump would provide welcome relief.

A final observation: Freyer grew up secured from the decadence of Hollywood
by the Anti-Fascist Protective Wall (the official East German designation for
that structure). Yet in Los Angeles one is always aware that Hollywood is right
next door, and there is much in Freyer’s Ring — the
streaming of colored patterns, the choreography of lighted tubes — that
brings that proximity to mind. On the other hand, had Wagner had this
technology at his fingertips, he — like Bach at a Bechstein — would
have gone bonkers. He would have abandoned his insistence upon
“real” trees and rocks and lost himself in the imagination in which
Achim Freyer indulges himself perhaps a bit too freely.