‘You see, I’m bad, aren’t I?’ declares Miles,
teasingly, at the end of Act 1. Indeed. The ‘evil’ which James
desires that his readers should merely ‘imagine’ is unambiguously
paraded before our eyes by McVicar: the children romp riotously in a frenzied
nursery scene; Quint glints malevolently from the Tower, and brazenly
challenges a hysterical Governess; Miss Jessel wails with bitter fury, grasping
at Flora in a desperate bid for Quint’s attention; the Governess
rampantly suffocates the children she professes to protect. 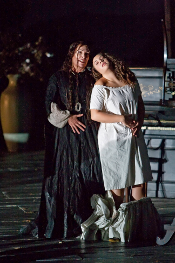 The dimly-lit stage suggests first the cold, charmless recesses of Bly, then
the eerie expanse of the gardens and lake, as filmy, translucent screens
shimmer back and forth, brushed evocatively by Adam Silverman’s subtle
lighting. The occasional gleam glances on an iron bedstead, an ancient piano, a
painted rocking horse, as McVicar assembles an authentically Victorian domestic
world, faithfully to James’ original setting. In the shadows, servants
scurry back and forth, their reflections caught in the rolling panes, hinting
at other presences and snatched visions. Aware of the critical debates
concerning James’ ambiguous novella, Britten declared that he wanted
‘real’ ghosts singing ‘real’ music – no symbolic
groaning and shrieking! – but, one might argue that in this production
the ghosts are in fact all too real: despite the presence of the sleeping
Governess during their Act 2 Colloquy, these are genuine physical beings, not
imagined phantoms or indefinite apparitions.

In this unequivocally corrupted world, Mrs Grose is certainly right to fear
for the safety of her charges, Flora and Miles. And this was a magnificent
performance by Dame Anne Murray, whose lyrical, eloquent cries convincingly
conveyed the housekeeper’s heartfelt anxiety, motherly love and tremulous
fear for the children’s welfare. In the ‘Letter Scene’,
Murray’s clear, focused lines powerfully demonstrated her genuine concern
when Miles is dismissed from his school; although the appearance of
Quint’s uncanny celeste motif hints at the cause of Miles disgrace,
Murray’s outpouring of relief that the Governess shares her faith that
Miles cannot be truly ‘bad’ was truly touching.

Despite rather woolly diction, the Welsh soprano Rebecca Evans went from
strength to strength as the performance progressed. The occasional
‘catch’ in the voice was evident in the opening scene, marring for
example her telling line ‘O why did I come?’; but as her confidence
grew she produced some beautiful, floating curves in the upper register, subtly
lingering, abstractedly, and perfectly conveying the deluded romanticism of a
dreamer whose unworldliness proves more dangerous than the actual horrors she
imagines. Transfigured by a single beam of light, Evans’ final, chilling
wail, over the body of the dead Miles was both poignant and emotionally
piercing. 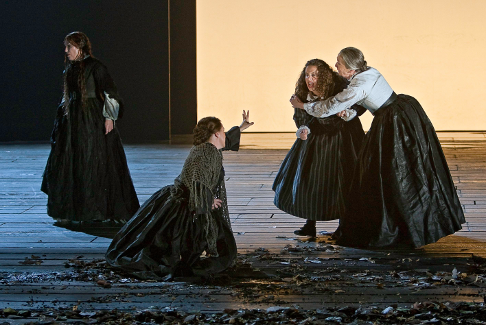 Cheryl Barker (as Miss Jessel a former governess), Rebecca Evans (as The Governess), Nazan Fikret (as Flora) and Ann Murray (as Mrs Grose the housekeeper)

The dual role of the Narrator/Quint was performed by tenor Michael Colvin.
He projected well in the Prologue, carelessly flickering through the pages of
the manuscript which holds that tale, his confident, warm voice aptly conveying
the nonchalance, bordering on neglect, of the handsome guardian, and also
foreshadowing the seductive charm of Peter Quint himself. Quint’s first
vocal utterance, his unearthly nocturnal appeal in Scene 8, ‘At
Night’, slyly crept in, oozing bitter-sweet charm and building to a
commanding, hypnotic plea. However, Colvin did not always capture vocally
either the pernicious seductiveness or menacing malevolence of the presumptuous
valet. Certainly his actions leave little room for doubt: he whips the bed
clothes from the sleeping boy’s bed, lures and urges him to embrace
‘freedom’. But, it was not until the Act 2 battle between Quint and
the Governess that Colvin captured the truly forceful note of desperate evil as
he implored Miles to steal the letter. Cheryl Barker, as Miss Jessel, was
equally compelling: she avoided overstatement and dramatic extremes, balancing
menace with lyricism, indicative both of her spurned love for Quint and her
despair at his betrayal.

Completing a superb cast, Charlie Manton as Miles and Nazan Fikret as Flora
were outstanding, never overshadowed or out-sung by their professional
partners. Manton’s Miles was certainly a match for any of the adults:
effortlessly evading their attempts to constrain and curtail his burgeoning
individuality and maturity. His ‘Malo song’ was beautiful in its
innocence and purity, the intonation perfect and the words delivered with
unaffected clarity, as the cor anglais twined sinuously around the haunting
melody. And, the Act II piano-playing scene was expertly pulled off, as the
precocious young boy convincingly mimed his way through an increasingly piquant
sequence of piano pieces, thereby distracting his guardians and liberating
Flora to flee to the arms of Miss Jessel. A final-year undergraduate at the
Guildhall School of Music and Drama, Nazan Fikret is an experienced in this
role, which she first sang aged twelve, and her confidence and accuracy suggest
a promising talent.

Returning to conduct The Turn of the Screw in London for the first
time since 1956, Sir Charles Mackerras created unstoppable musico-dramatic
momentum in the pit, the sliding screens allowing him to maintain the
expressive tension in the instrumental interludes, as each scene merged
seamlessly into the next. This was both powerful ensemble work and impressive
solo playing. Every colour and nuance was presented with precision and force;
indeed, one would scarcely guess that there were only 13 players in the pit –
the timpani outbursts were spine-shuddering. A curtain call presentation by
current Music Director Ed Gardner to Mackerras acknowledged the latter’s
achievement over 61 years, at this theatre and internationally; clearly there
are no signs of a diminishing of the conductor’s dramatic insight or
musical energy.

Britten’s opera is essentially an ‘intimate’, even
private, work: 16 short scenes interspersed with tightly twisting instrumental
variations enact a psychological drama presented by just 6 soloists accompanied
by only 13 instrumentalists. Yet together, McVicar and Mackerras argued
persuasively that the horrors and fears that this Jamesian tale reveals are
vast and threaten us all.

All photos by Clive Barda courtesy of the English National Opera