The assembled cast of principals and the chorus interacted so
convincingly — on both vocal and dramatic grounds — that these
performances will serve as a benchmark of performing Gounod’s opera for
some time to come. Making his Lyric Opera debut in these performances was Piotr
Beczala, who has recently sung the role of Faust to much acclaim at a number of
European venues. Marguerite was sung by Ana MarÌa MartÌnez, who portrayed a
dramatically and lyrically incisive heroine in this her first assumption of the
role. RenÈ Pape brought his considerable skills to the role of Mephistopheles,
and Lucas Meachem made a great impression as a lyrical and committed
Valentin.

Even before the action began on stage the orchestra under the direction of
Sir Andrew Davis set the tone with a taut, controlled performance of the
overture. A carefully conceived balance was achieved between strings,
woodwinds, and brass with the harp then leading smoothly into a statement of
Valentin’s theme. A reprise of the strings signaled then the ultimate
move toward a subdued resolution.

At the start of Act I in this traditional production Faust truly looks both
fatigued and aged. In his dusty laboratory corpses lay under sheets, and the
newly dead are being carried in to join the others. Faust is surrounded then by
death and the futility of knowledge, prompting him hence to consider suicide.
His scene beginning on the word “Rien” (“Nothing”) sets
the tone of resignation in the doctor’s famous soliloquy. Only the voices
of peasants and youths heard from outdoors prevent Faust from drinking a goblet
filled with poison to end his life in desperation. Still these glimmers of
happiness and reminders of God’s bounty cause Faust only to curse human
endeavor and to cry out for the support of Satan (“Satan ‡ moi!”
[“Satan appear to me!”]). From this point till near the end of the
opera Mephistopheles and Faust are inexorably linked. In his movements through
the set Beczala gives the impression of aging futility, while his committed
singing underlines the yearning of so much not experienced in this mortal life.
His delivery of the toast to this final day on earth unleashes an emotional
conviction to die, highlighted by ringing and extended top notes on
“Sal˚t” (“To you”). When Mephistopheles arises, here as
a vivified corpse from a laboratory table, Pape’s opening lines are sung
in the stylish and effective guise of the “gentilhomme”
(“cavalier”), as he describes himself with great melismatic fervor.
His ensuing dialogue with Faust, in which he coaxes the doctor to reveal his
desire, is performed with a lyrical ease, so that Pape assumes a likeable pose
both to the hero and to the audience. When Faust confesses his desire for
“la jeunesse” (“youth”), Mephistopheles produces the
contract, by which Faust will sign away his soul, along with an apparition of
Marguerite to secure the doctor’s commitment. At this point the vocal
interaction between Beczala and Pape, in varying each other’s lines and
singing in duet, was flawless and dramatically executed. Beczala’s
transformation into a young man induced a lyrical enthusiasm for worldly
pleasure (“¿ moi la plaisir” [“For me the pleasure”])
and the quest for adventure. As both figures declare “En route”
(“Let us be on our way”), they abandon the confines of the musty
laboratory. 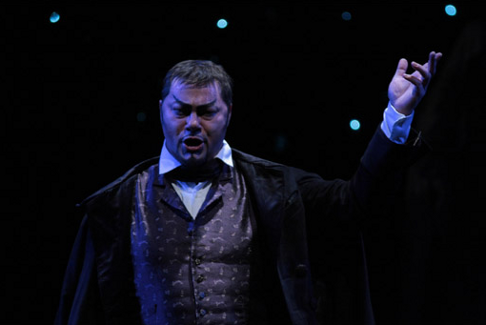 Act II in Gounod’s opera moves from the collective and crowded to the
individual At the start a village fair has begun with participants including
students, soldiers, young women, and townspeople. Here the Lyric Opera Chorus
gave an exceptional performance in its rendition of the paean to wine.
Immediately following the choral delights the young soldier Valentin becomes
the center of attention. Before he leaves for battle Valentin sings of his
concern for his sister Marguerite and begs God to protect her. In this role
Lucas Meachem has proven his exceptional agility in the lyric baritone
repertoire. From the start of his cavatina “Avant de quitter ces
lieux” (“Before departing from this homeland”) Meachem imbued
his words with emotional tension, showing exquisite ascending notes on “a
toi” (“to You, Lord”) and “ma soeur” (“my
sister”). He introduced military imagery in the middle section without
bluster and concluded the cavatina on a securely extended pitch at
“Roi” (“King of heaven”). The pendant aria to Valentin
in this act is “Le Veau d’Or” (“The Golden Calf”)
sung by Mephistopheles. Pape’s acting was equally important as he
transformed the piece into a dramatic as well as lyrical turning point.
Although the villagers marvel at the stranger’s tricks, Valentin becomes
suspicious. Faust himself enters and, at last, has an opportunity to address
Marguerite. Although she does not accept his overtures, Faust realizes that he
loves her. At the close of the act Mephistopheles assures him of continued
assistance in gaining Marguerite’s devotion.

The preliminaries of Acts I and II set the ground for the following two
acts. In Act III the role of SiÈbel, sung in this production by Katherine
Lerner, shows a further development of her rapt devotion for Marguerite. Ms.
Lerner gave an appropriately infatuated rendition of SiÈbel’s entrance
aria while she intoned the verses with care and lush expression. As
Mephistopheles and Faust re-enter they make plans for Faust’s further
pursuit of Marguerite. Faust’s cavatina “Quel trouble inconnu me
pÈnËtre?” (“What unknown care oppresses me?”) was yet another
highpoint of the performance. Beczala’s voice remains strong and
convincingly produced in all registers, his characterization of the
love-stricken hero showing polished, graceful tones and well-placed breath
control. At Marguerite’s entrance into the garden she sings the ballad of
the “Roi de ThulÈ” (“King of Thule”), followed almost
immediately by the famous jewel song in response to finding the tempting jewel
case left by Mephistopheles. Ms. MartÌnez’s voice is here well suited to
the role, her piano notes being securely projected and a burnished
quality infusing the voice when she sings forte. Her performance of
the trills and roulades in the second aria show also a strong technique for
coloratura. After this scene the couples are paired in counterpoint: Marguerite
and Faust, Marthe and Mephistopheles. The arrangement will return again later
and is especially well staged in the current production. In the final duet of
Act III Beczala and MartÌnez gave a touching rendition of the blossoming love
which must, at first, wait and then can be halted no longer. (“O nuit
d’amour!” [“Oh, night of love!”]). Mephistopheles
laughs loudly as the two are finally united.

In Acts IV and V the earthly downfall of Marguerite becomes increasingly
apparent. In the first scene of Act IV she stands at a loom lamenting in her
aria this abandoned position and the scorn she senses from her former
associates. Despite the faithful devotion expressed by SiÈbel in his following
aria, Marguerite simply questions Faust’s wandering. Throughout this
scene and the following, in which she prays in church for forgiveness, MartÌnez
displays a keen sense of dramatic commitment while maintaining a lyrical
command of line. In the next scene Valentin returns from the war and learns of
his sister’s transgression. The dueling scene that is staged between him
and the drunken Faust is a marvel of choreographic daring culminating in the
soldier’s being mortally wounded. Meachem sang a convincing scene of
Valentin’s death ending with a chilling curse of Marguerite as being
responsible for her own dishonor as well as his death (“Marguerite! Sois
maudite!” [“Marguerite, be accursed!”]).

In the final act Faust comes, with the help of Mephistopheles, to visit
Marguerite in prison where she awaits execution for having murdered the child
she bore to Faust. The madness communicated by MartÌnez is heart-wrenching as
she clutches a blanket rolled up as though it were an infant. A last idyllic
illusion of happiness between the lovers is sung with great fervor, as Beczala
and MartÌnez participate in an emotional duet, enhanced by both with well
executed decoration and melismas. This idyll is, however, interrupted as
Mephistopheles steps forward. Marguerite’s soul is saved, as announced by
voices from heaven. In this production the contract signed by Faust to serve
Mephistopheles after death bursts into flames. The curtain then falls with, at
least in this instance, the end of the devil’s power.

All photos by Dan Rest courtesy of Lyric Opera of Chicago