So, let’s begin with the wholly idiomatic and beautifully judged conducting from Carlo Rizzi, shall we? From the first downbeat Maestro Rizzi savored every varied detail of Puccini’s masterful orchestration. He not only reveled in its lush lyrical moments but also put real spunk into the intentioned rambunctiousness and occasional silliness. The house is privileged to have several “resident” orchestras, and on this occasion the estimable Netherlands Philharmonic Orchestra played with fire (as it were), sumptuous beauty (when called for) and a dynamic color palette.
Chorus Master Martin Wright coached his lusty-voiced, silver-throated boys to a fare-thee-well, or rather a ‘doo-dah-doo-dah-day.’ The chorus also contributed some wonderfully sensitive, mellow ensemble vocals, especially in the score’s closing moments. And what an exuberant and frequently giddy score it is. (I always forget that Lloyd Weber stole. . .I mean “borrowed” that swelling lyrical phrase for the climatic section of “Music of the Night.”)
The entire cast seemed to be having the time of their lives. First and foremost, the sublime Eva-Maria Westbroek could “own” the part of Minnie if she so desired. She has a thorough understanding of the arc of the role, and after her gun-slinging entrance, comfortably settles into Act One as a socially naÔve love object. Her phrasing and delivery were beautifully modulated to suggest insecurity and uncertainty as her attraction to Johnson progresses. However, her revulsion for Rance nevertheless had all the required steeliness without caricatured meanness, a starchy resolve that she broadened in Act II.
As her feelings for Johnson became more and more pronounced, the Dutch diva plumbed deep emotional reserves, offering some beautiful warm, womanly singing as she surrendered to her attraction. As her desperation to save her lover escalated, Ms. Westbroek unleashed molten phrases above the staff that glanced through the house like laser beams. Her assured return in Act III found her transformed by the ordeal, resolved to win over the minds of the assembled on-stage forces and fully prepared to embrace her role as Dea Ex Machina/heroine – of the plot as well as the heart.
Her last lengthy “appeal” to her beloved boys was as heart-rendingly acted as it was impeccably vocalized. Eva-Maria may not have the final Italianate sheen of a Tebaldi on the very top, but she has the style down pat to include a commendable use of portamento. She is in every sense poised to be the leading exponent of this role today. Let’s call her a Minnie-miracle.
Since last I heard Zoran Todorovich, his meaty tenor has gotten bigger and more imposing. He not only cut a good figure as Johnson, but he also provided some really fine acting in the bargain. His way caressing a Puccinian phrase was masterful, witness his heart-stopping, sotto voce plea to Minnie for “solo un bacio. . .” (so persuasive that there seemed to be several willing takers seated around me. . .)
Mr. Todorovich could also really pour on the steam, and he was a very considerate collaborator for his soprano with whom he had substantial chemistry. The trade-off in having put some weight and fullness into his technique is that the (always secure) uppermost top became a bit broad and straight-toned. Small matter, our tenor gifted us with top notch singing all night and contributed a memorable version of his last arioso.
As the Sheriff-We-Love-To-Hate, Lucio Gallo delivered a winning hand with his assured Jack Rance. His baritone is not exceptionally large (not Milnes-ian, say) but it is very well-focused and cleanly produced, creating the aural result that it is quite imposing indeed. He rode the orchestra with ease and offered a well-rounded, smoldering characterization rather than a cartoonish cad. 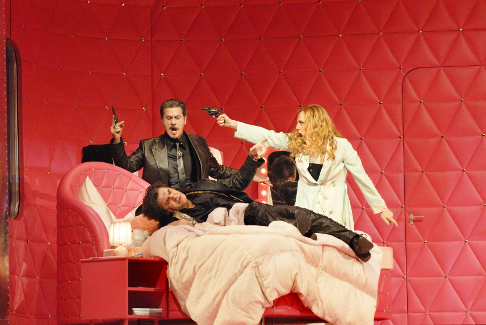 Lucio Gallo (Jack Rance), Zoran Todorovich (Dick Johnson), Eva-Maria Westbroek (Minnie)
The featured male principals were cast from strength, with Roman Sadnik’s Nick a real stand out. Andre Morsch contributed a nice moment with Jake Wallace’s solo, and Tijl Faveyts made the most of his stage time as Billy Jackrabbit. Ellen Rabiner is without a doubt the most petite Wowkle I have ever seen, but her contralto was anything but — it rang out in the Muziektheater with polished presence. Patrick Schramm’s homesick Larkens was sweetly touching. The entire ensemble acquitted themselves with honor.
Set Designer Raimund Bauer devised tremendously effective playing environments. Act One’s Saloon would not have been out of place as the Guys and Dolls crap game sewer, save for the addition of slot machines and a Wells Fargo Bank safe down center. Judging from program book “research” photos, the look was meant to approximate a DC Metro platform, but for a large rectangle cut out to reveal a Wall Street-like skyscraper projection above (the excellent video work was devised by Jonas Gerberding). Director Nikolaus Lehnhoff and his team used the underlying themes of greed and the power of money to create a staging that took the piss out of American obsession with wealth, guns, cars, status, sex, and Hollywood celebrity.
While it is hardly “news” for European productions to satirize the US, surely Fanciulla is the fairest of fair game since it already parodies so much of the stereo-typical American western life of legend. Metro station be damned, with the saloon’s trippy pink and blue fluorescent-lit bar, and the miners in Andrea Schmidt-Futterer’s hip Western leather wear, it could have as easily summoned up Happy Hour at the Mineshaft!
This was an endlessly entertaining and eye-filling production. The stylized gesticulating and frozen poses of the gambling were visually arresting, with total involvement from the large male cast. Jake’s solo offered a wonderful interpretive goof, having him clad in a white outfit with white guitar, jacket fringe rippling, looking for all the world like an apparition of The Singing Cowboy (well, sort of Liberace meets Gene Autry) atop the saloon entrance as the cityscape changed to a stylized bucolic scene that scrolled lazily behind him. It was here that Minnie later made her very effective first (star) entrance in red leather overcoat, black cowboy hat, and relentlessly smoking gun, before she strode to stage level down a staircase that seemed to appear from nowhere. 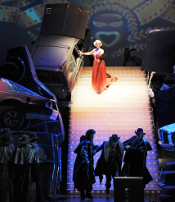 Act II’s curtain opened to reveal a Hollywood-style luxury dressing trailer of the kind-that-never-was except in fantasy. All pink-tufted walls, and cheekily accessorized (Disney’s Pocohantas was playing on the kitchen counter TV), this was a brilliant re-invention of the usual log cabin affair. A pink teddy bear on the bed provided an amusing moment when Johnson reacted to having absent-mindedly picked it up. The hiding place for the wounded outlaw was atop the whole shebang, accessed by a telescoping ladder than Minnie yanked down to good comic effect. Later, when Rance did the same with brutish malintent, it was a chilling, truly disturbing moment.
There was awesome attention to detail. Two large deer lawn ornaments graced the snowy yard and as the lights dimmed during the romantic moments, their eyes lit up and glowed a warm orange. An American flag was frozen in flight, unfurled on the flag-pole, and a lighted statue of the Virgin Mary was in the window. Once revealed, the faltering Johnson collapsed and fainted on the bed. Rance, having lost at cards, is further humiliated by having to pry and pull his coat out from where he had left it, now pinned under the unconscious Johnson. Dynamite stuff. Telling dramatic moments. Flat out superbly inventive direction from a supremely gifted director.
Act III starts with a reveal of an automobile graveyard, an enormous sculptured pile of realistic cars, prompting spontaneous audience applause. As cast members crawled out of cars, it was like a stoned, leather, C/W version of the junkyard scene in Cats, except with good music. The applause meter went off again a bit later when the whole damn thing turned to reveal Minnie as a Jean Harlow-like movie star in dazzling sequined gown atop a Busby Berkley staircase. When the MGM logo ultimately lit up behind her (yes, the lion roared at the very end) the send-up (and our joy) was near complete. Perhaps the final moments risked gilding an already golden lily. For the front scrim flew in and the miners grasped the air to collect falling (projected) paper money, with the Love Couple posed wedding-cake-like atop the staircase. Then a giant twenty dollar bill image grew larger and larger and finally obscured it all while Rance pointed his pistol at us, guarding the safe as the lights dimmed. Gilding? Perhaps. Effective? You betcha.
The redoubtable Duane Schuler’s lighting was of the highest caliber throughout. Witness the atmospheric isolated spot at the close of One on a contemplative Minnie, an image floating dreamily among the twilight of the gaming machines. And the moody shadows cast in the trailer. And the starlight poking through the wintry sky. And and and. . .fine work as usual, Mr. Schuler.
There are those who are bothered if every line of text is not enacted with absolute faithfulness, or treated with utmost literalism. Those are the same dreary tut-tutters who still expect to see a three hundred pound soprano ride “Grane” onto the pyre. Get over it! Lighten up! Let’er snap!
For those with a taste for an inventive, wholly successful, personalized, humor-infused interpretation that still honestly represents Puccini’s creative achievement and embraces his blatant sentimentality, then hurry at top speed to Amsterdam for their La Fanciulla del West is a shining model of its kind.
James Sohre