Don’t like it? Wait five minutes and it will change.
There is a good deal to admire in this double bill, not least of which is the rare opportunity to enjoy two seldom-performed pieces mounted by such a reputable company. However, too often during the evening, I found myself becoming engaged by a tender moment, or beginning to relish a powerful musical development. . .only to be interrupted by a crass directorial “improvement.”
There are really two separate productions going on here (See: “wait five minutes,” above). One is the relatively straight-forward and conventional telling of the musical drama in rather traditional and genuinely pleasing theatrical staging. Then there is a concurrent, wholly invented television studio experience that is part reality show. Part game show, part National Enquirer, and all colossally ineffective.
Not that I disapprove of the concept outright. Frankfurt Opera itself used this device to brilliant effect with its televangelical Rape of Lucretia two seasons past. What I object to is that director Sandra Leupold took a cheap, easy way out of having to deal with the (admittedly naÔve) pleasures to be mined from the two operas at hand.
Hmmmm, how to make these curiosities palatable to today’s audiences? Hmmmm. . .I know, let’s tart them up with game show “Moderators”! The glitzily-attired actors Ingrid El Sigai and Marcus Hosch do what they can with these irrelevant creatures, but seemed quite self-conscious (maybe pre-occupied with the pay check they would at least be getting. . .)
The three blue-sequin-gowned Vanna White’s seemed to have wandered in from another show, waiting in vain for a vowel to be bought or a letter to be turned. But worst of all was the inconsiderate and considerable obstruction by the “cameramen” and “stage managers” who would interpose themselves between the soloists and the audience. No fooling I spent one touching soprano aria relegated to looking at a burly extra’s butt as he “televised” her performance to a giant on-stage screen. . .that. . .again, no kidding. . .had a sound delay! Looked like a badly dubbed movie on German TV.
Where the hell to look then? The viola section? The surtitles? The exit????
Heike Scheele’s set and costume design was at its worst in the utilitarian television studio which comprised the encompassing space for the shows. However, within the confines of the raised circle on which the actual operas were performed, there was much that was pleasantly colorful, representational, and traditional.
I especially found Mr. Scheele’s Chinese costumes for the Leoni to be character-specific and beautifully rendered; the rustic Puccini clothing was also quite delightful, although perhaps the tutu’d chorus nod to Giselle was just too over the top. I also appreciated the clever and appropriate scenic insets that he devised for both pieces,and the competent lighting from Joachim Klein. The show-within-the show, that is to say the actual operas, was often very agreeable.
The credit for that has to begin with the fine idiomatic playing elicited from the pit by conductor Stefan Solyom. He never once flagged in presenting these two (let’s be honest) weaker compositions with commitment and authority. He seemed to wring every bit of musical excellence he could from his orchestra, and kept the evening buoyant and forward-moving. He also ably partnered his hard-working singers. Matthias Koehler’s chorus, and Michael Clark’s children’s chorus were likewise also very well-prepared, but suffered the fate of being clumsily and busily deployed in this mess of a concept. 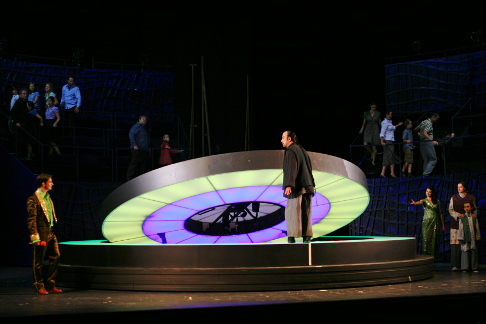 Marcus Hosch (Moderator), Peter Sidhom (Cim-Fen), Ingrid El Sigai (Moderatorin), Katharina Magiera (Hua-QuÓ), Tobias Jantsch (Hu-CÓ) and Chor, Kinderchor and Statisterie der Oper Frankfurt in background
While L’oracolo may have its confusing pseudo-Asian dramaturgy, any minor musical longeurs were glossed over with committed performances. As Cim-Fen (opium den owner) Peter Sidhorn may not have offered the most suave singing, but compensated with great presence, the same that could be said of his interpretation of Guglielmo (*Le Villi*). Ashley Holland’s mellifluous voice was arguably the finest performance in Chinatown, as the learned doctor Uin-Sci. Franz Mayer put his soft-grained, affecting instrument to good use as the rich tradesman Hu-Tsin and Katharina Magiera made the most of her brief moment as Hua-Qui revealing a gorgeous, creamy mezzo.
One of the reasons for this mounting had to be to showcase local favorites, Annalisa Raspagliosi and Carlo Ventre, both of whom were cast in both operas.
Ms. Raspagliosi has already had a big career with big credentials, not least of which was a happy association with the legendary Pavarotti. Here she is undertaking Ah-Joe and more notably Anna in Le Villi. The latter suits her gifts more than the former. At this point in her development, she reminds me of the great Renata Scotto for Anna also commands an unerring sense of projecting the text, effortlessly embodies the character at hand, and seems incapable of a musical false move. 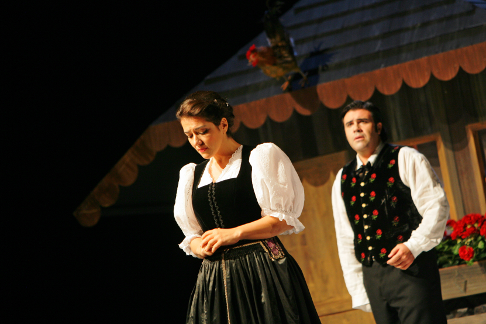 Annalisa Raspagliosi (Anna) and Carlo Ventre (Roberto)
That said, like Renata of yore, she also is beginning to sound a bit like a supremely gifted lyric soprano who has ventured a bit too far into heavier territory (Tosca, anyone?). Her high notes still float, but not without some discernible effort. Her sense of line still commands, but not without a bit of gear-shifting here and there. And the vibrato has gotten a bit more, shall we say, generous? Still, she offers an assured assumption of these two heroines, is lovely as lovely can be, and her Frankfurt public adore her. And why shouldn’t they? In an era of pretenders to the throne, her singing is still a connection with Old World Glories.
Before the Puccini, tenor Carlo Ventre was announced as indisposed, something I had suspected during the Leoni where his vocalizing as San-Lui seemed a bit cautious with meslimas a bit labored. Once our indulgence was requested so he could continue as the second opera’s Roberto (and who the hell else knows the role?), Mr. Ventre actually sang with more assurance, and even with real abandon. He is a fine singer with a burnished tone, and if a few phrases were husbanded carefully and a few notes grew rough-edged, he not only gave a pleasurable account of his two assignments, but also saved the night!
Like with the German weather then, while I had a great time discovering these two operas in staged versions for the first time, and while I enjoyed so many of the components, I found myself waiting, nay wishing for a change for sunnier horizons. Were the staging to be re-imagined losing the television concept entirely, I can predict the remaining elements would make a far superior evening at the opera.
James Sohre

All photos by Wolfgang Runkel courtesy of Oper Frankfurt