Full-scale power over a huge orchestra is demanded of them, and the parts are
often given, like Valkyries or Rhinemaidens, to budding dramatic sopranos. That
being understood and the brevity of the parts being acknowledged, still, it is
not a good sign when three or four of the maids have louder, more focused, more
credibly heroic voices than either Elektra or Chrysothemis. But such was the
case at the Met on December 15.

The Elektra was Susan Bullock, who was unable to bring the requisite force
to this endurance contest of a part. We must be grateful to any soprano who can
simply get through it, but any pressure seemed to push her vibrato wide open,
and the whole performance was thin and squally, never vocally overwhelming and
uninformed by any vision of Elektra’s personality. Her acting, too, was
graceless, which may suit the bedraggled nature of a princess in the mire, but
Bullock spent most of the evening staring at the conductor or waving an axe
about the stage, and she made little of the dancing, a tricky bit for any
Elektra.

Deborah Voigt, in distressing vocal estate, sang Chrysothemis, and never
have the two sisters seemed so well-matched, so related: neither of them could
bring full force to her music, and they bickered like kittens when the matter
under discussion is how they are to murder their mother. Not until the
triumphant final scene did Voigt give forth a few of the radiant notes that
were once a feature of her Strauss singing. Perhaps it’s just as well the
Met shelved the originally scheduled revival of Die Frau ohne
Schatten, once a Voigt signature. 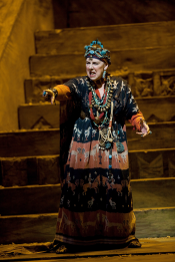 The appearance of Felicity Palmer as Klytemnestra came as a great relief.
Palmer cannot manage hurricane force either, but she had something more: a
highly focused conception of the character. Her voice seemed dull, drably
colored, as if by the bad dreams and lack of sleep she sings about, and then
color crept in as Elektra goaded her with false hopes and conundrums. Gaunt and
frail but vigorously flailing her staff, she made a striking figure, terrifying
for the example of her fate.

Evgeny Nikitin’s bass-baritone possesses the size and dignity for
Orest, but his singing was grainy rather than ominous on this occasion.
Wolfgang Schmidt sang an unusually sturdy Aegisth — the role is usually a
caricature — and John Easterlin was impressive in the small role of the
arrogant servant sent to fetch him.

The tilted Otto Schenk production grows on one with time — its
unnerving angles intentionally set the teeth on edge as we meet this most
famously dysfunctional of families. I liked David Kneuss’s direction, but
I’d like it better if the singers sang to each other now and then, if
Elektra didn’t wave her axe like a cheerleader, and if the Overseer did
not crack her whip only to have the Serving Maids pay no attention. Surely they
would shut up when the whip cracked, if indeed the Overseer were the fearsome
creature intended? In which case, the whip cracks should be timed for those few
moments in their scene when the maids are about to shut up.

The hero of the night was Fabio Luisi in the pit, a masterful Strauss
conductor who spared us nothing of the brutality of this devastating score but
at the same time was always careful never to contest the air with his singers,
holding the turbulence down so that vocal lines were clear. Underpowered some
of them might be, drowned out never. Such courtesy and skill have not always
been featured by conductors of Elektra.