Fabio Luisi, music director of Dresden’s Semper Opera with a contract that was to run through the 2010-2011 season, was slated to conduct two spring cycles of Wagner’s Ring des Nibelungen with the company.

In February, however, Semper administrators signed a contract with German television for a New Year’s Eve concert by the Saxon State Orchestra, the pit band at the Semper Opera. Conductor will be Christian Thielemann, already named to succeed Luisi in Dresden in 2012. Luisi, told nothing about the contract, was understandably miffed and resigned his Dresden position — including the Ring engagement — immediately. This left the opera with less than a month to find replacement conductors the Wagner cycles. 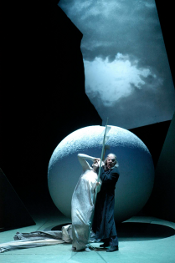 In a world poor in great Wagnerians, the Opera did amazingly well by engaging several maestros, each of whom brought his particular stamp to the performances. Jonas Alber, who has conducted numerous Ring cycles at lesser houses, stepped in on short notice for the March 10 Rheingold, the opening opera of the tetralogy.

With the Saxon State Orchestra at his disposal, of course, Alber could hardly do anything wrong. Dating back to 1548, it is Germany’s oldest orchestra and among opera ensembles without its equal. Alber proved himself an experienced craftsman who brought coherence to the fragmented drama that Rheingold is.

Things moved in quite another direction when John Fiore took over the podium for Walk¸re. The still-youthful American, now at home at Germany’s Deutsche Oper am Rhein, the joint venture that serves both D¸sseldorf and Duisberg, is a passionate conductor who brought vivid animation to the tangled passions of the chapter of the story focused on the incestuous love match of twins Sieglinde and Siegmund. 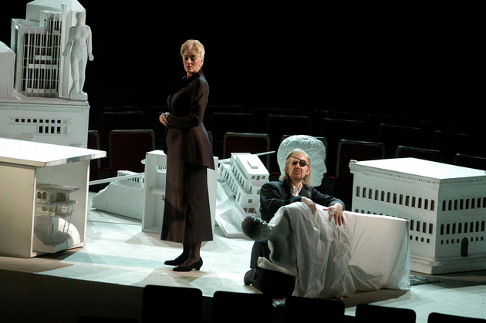 Next in line was Israel’s Ascher Fisch, who although not allowed to conduct Wagner in his homeland, has built a reputation as a major interpreter of his works in other countries. (Fisch conducts the new Tristan slated for Seattle in August.)

Alber returned to go beyond himself in making the final Gˆtterd‰mmerung on March 17 overwhelming.

Watching the 100-plus musicians of the Saxon orchestra from the balcony in the fury of Act Three of the opera made clear that when Wagner is on stage in Dresden the ensemble is simply a member of the cast. The impassioned involvement experienced here — four harps, eight horns! — confirmed the world-class quality of the Semper Opera, currently celebrating its 25th season in the rebuilt historic house reduced — like the rest of Dresden — to ruins in the night of February 13, 1945. 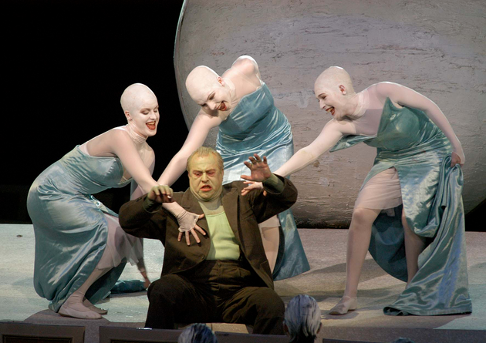 This Ring is further the first complete staging of the cycle in Dresden since World War Two. (In the earlier spring Ring Fisch conducted both Siegfried and Gˆtterd‰mmerung.)

All photos by Matthias Creutziger courtesy of S‰chsische Staatsoper Dresden