Therein, perhaps, lies the one weakness in
this powerful and impressive staging. For JanačÈk’s opera, while
admittedly melancholic and menacing, contains contrasting moments of ecstatic
joy, matched by melting sonic radiance — moments which resonate with
gleams of light and colour, but which were almost wholly subdued by the
sinister grey tones of Alden’s vision.

Alden knows this territory well, as his 2006 Jenůfa and more
recent Peter Grimes testify. The slanted perspective of the steeply
raked set, lend an air of edginess. Sudden and extreme changes of lighting
(designed by Adam Silverman) cast monstrous shadows across the immense expanses
of the bare, decrepit stage, its distressed emptiness broken only by a lone
chair, a single lamp-post. All seems somewhat familiar … And indeed, as
an abstract portrait of torment and pain, it serves its purpose well. Yet, the
very vastness of this landscape makes it difficult to convey the claustrophobic
tension which suffocates the eponymous protagonist. Set in a stifling,
provincial community, Katya Kabanova relates the persecution and
destruction of a pure heart; Katya battles with her inner demons and struggles
against the mean-spirited hypocrisy of the mercantile Russian villagers who
judge her. It is the explosive shattering of the chains that bind her soul and
body that destroys the village’s self-righteous complacency, and propels
Katya to tragedy — Ostrovsky’s play, on which the opera is based,
is aptly called ‘The Storm’. But Charles Edward’s design,
which suggests the infinite vistas of the Siberian steppes, does not capture
the constriction and restriction which is both within and without the tragic
heroine. 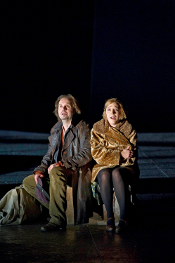 Alfie Boe as Vanya Kudrjas and Anna Grevelius as Varvara

The characterisation of Katya by American soprano, Patricia Racette, making
her debut at ENO, was in accord with Alden’s expressionistic conception.
Her total isolation was sustained throughout, her psychological and spiritual
distance from the other characters and her yearning for escape suggested by her
frequent positioning at the furthest edges of the stage. Isolation increasingly
became self-absorption; separated by the entire width of the stage, Katya and
her lover, Boris (Stuart Skelton), seemed emotionally disconnected —
Racette’s Katya is more in love with love than with this weak, pitiful
merchant. Confident and sure throughout, Racette was certainly technically in
command of the role. Yet, when Katya sings to Varvara in Act 1 of her youthful
dreams, her melody should float and soar as easily and freely as the birds she
has longed to emulate. Racette’s strong tone, together with a tense,
close vibrato, seemed too mature, and lacked the sweetness and air of fragility
which might express her essential innocence.

JanačÈk’s compression of Ostrovsky’s drama does to some
extent render the characters one-dimensional. But Alden, and his costume
designer, Jon Morrell, take this one step further, and reduce nearly all the
other roles to caricatures. A floor-length black cloak hiding a glittering red
gown, topped with a threatening, pointed headpiece, Susan Bickley’s
Kabanicha is a terrifying figure of authority and intimidate — the
stereotypical butt of all mother-in-law jokes, she resembles a vicious Lady
Macbeth, dominating and demeaning all. Bickley’s full, true tone
fortunately prevented this harridan from sounding as well as looking
shrew-like; but, should she really so openly acknowledge her own hypocrisy and
sexual avarice, brazenly turning the disapproving gaze of a religious icon to
the wall before subjecting the willing Dikoy (Clive Bayley) to some degrading
sexual bullying? 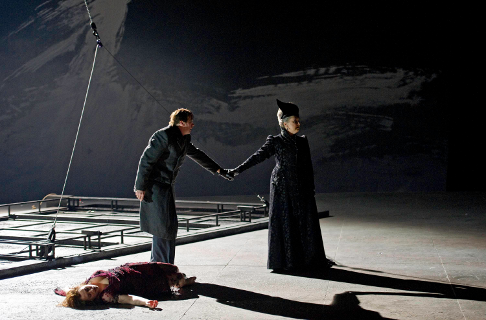 The men, on the whole, were a pitiful and contemptible bunch. Both Boris and
Tikhon are weak-willed, self-preserving specimens. Skelton sang lyrically, but
his tone was rather lifeless — there was little to suggest that he could
inspire Katya to such heights of passion. John Grahan Hall’s Tikhon was a
wretched victim of his mother’s oppression, and at times he communicated
the pathos of his situation, although like Bayley’s Dikoy, his mannerisms
were frequently too exaggerated and over-blown. It was left to Anna Grevelius
as Varvara and Alfie Boe as Kudrjas to introduce some convincing humanity into
this community of grotesques. The brightness and energy of their singing
injected a convincing sense of fun and spirit, Boe’s warm tone in
particular conveying the optimism of youth. The healthy, down-to-earth
practicality of this pair of lovers presented a stark contrast to the
self-destructive, dreamy solipsism of Katya and the directionless ineptitude of
Boris.

From the opening bars, where muted lower strings tenderly evoke
Katya’s purity of spirit and the frailty of her hopes, as well as the
dark depth of the river which will claim both, Mark Wigglesworth draw from his
orchestra playing of exceptional clarity and rhythmic vitality. The layered
textures of JanačÈk’s driving motifs were expertly constructed,
each melodic pattern contributing to the meaning of the whole. Wigglesworth
effectively built up the tension in Act 3, confidently controlling both the
rhythmic onslaught and the silences, as the drama lurched to its bitter
conclusion. 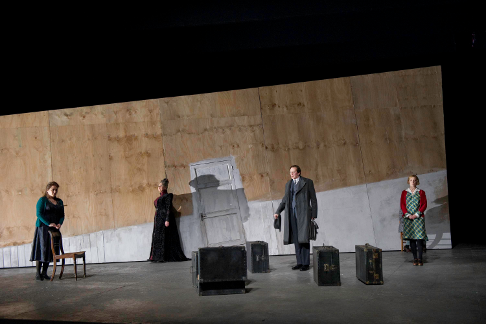 On stage, in contrast to this detailed musical drama, the semiotics were
unashamedly blatant. A vast propaganda poster depicting a Munch-like impression
of hell prophesised damnation, its fall to the ground foreshadowing
Katya’s own suicidal descent into the waters of the Volga. Why does she
confess and leap into the treacherous waters? Katya is a victim not just of her
own conscience. In such a soul-destroying, emotionally-deadened world, her
innate life-spirit and passion can only find an outlet in religious devotion.
And, she is watched and judged not just by God but by the Kabanicha and the
village she represents. Thus, Katya is sacrificed to preserve a self-satisfied
and repressive regime. However, in Alden’s view, Katya is as alone in
death as she has been in life. Having reduced the repressive village to a few
grotesque eccentrics, even the latter are distanced at the close, emotionally
removed from the human loss which is so profoundly and poignantly conveyed in
the music.