On the evidence of this
production, first aired by New York City Opera, he’s not too concerned
about the ‘dark side’ of medical charlatanry; for here Miller
invites us to enjoy a light-hearted evening of music and food, mischief and
fun, at ‘Adina’s Diner’ — a popular stopping place way
out in the America Midwest, beloved by homespun yokels and travelling
tricksters alike. We lap up the aural and visual candyfloss and, after a
charming evening, skip home, refreshed by the reassuring spirit of innocence
and optimism which prevails.

Isabella Bywater’s set is a superbly naturalistic recreation of the
era. The rolling yellow plains and flawless blue sky evoke the landscapes of
Edmund Hopper, and Bywater’s bubblegum pink and lime green diner
recreates Hopper’s ‘Nighthawk’, albeit with a more golden,
ambient glow. The revolving set is ingenious, but the dusty exterior is more
successful than the interior, the latter seeming cramped and overcrowded.
Despite Miller’s detailed direction of the chorus, there was simply too
little room, forcing many to remain seated — including, in the opening
scene, Nemorino, who, set back and enclosed by the set, was swamped by the
chorus and orchestra. 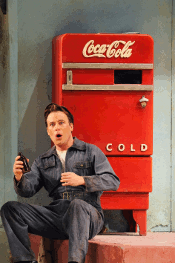 Into this rural eatery waltzed the confident proprietor, Adina. Sarah Tynan,
sporting a peroxide bob, was perky and coquettish rather than a vamp. Her voice
was as agile as her wiggling hips, and bright and warm; and she offered a
lively, engaging performance, perfectly conveying the mannerisms of a 1950s
blond bombshell. However, there was no sense of ’depth’ beneath the
flighty surface and Tynan offered little to mitigate her cruel treatment of
Nemorino.

Indeed, there was a disappointing lack of chemistry between the Adina and
Nemorino, the latter presented here as a gauche garage hand. Canadian tenor
John Tessier was a naÔve and trusting yokel, but while his clear, true
rendering was well-received, his voice is fairly light-weight and lacks an
Italianate warmth and colour that hints at passionate depths beneath.
Tessier’s ‘miraculous’ transformation from garage dunce to
matinee idol was not entirely credible and too often he sang to the audience,
rather than to the other characters on stage. However, the production did
create a dramatic context for ‘Una furtive lagrima’, which for once
did not seem like a convenient ‘add-on’. 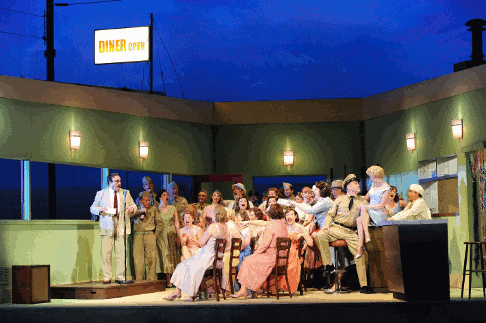 Andrew Shore as Dulcamara and company

The real star of the show was the experienced Andrew Shore, as the
oleaginous quack doctor, Dulcamara. He slid in, seated in an ostentatious
open-top Cadillac cabriolet (its shine a little sullied after a journey across
the dusty plains), looking sharp but shifty in white suit, shades and brogues,
panama hat perched rakishly on ill-fitting wig. Shore’s swindler was
confident, assured, and crafty. [The automatic dispenser for Coca-Cola —
that ‘pure refreshment’ that ‘revives and
sustains’ — was cleverly positioned …] Indeed, for Shore’s
sparkling salesman’s pitch the surtitles disappeared — one assumes
this was an intentional acknowledgement of Shore’s prowess rather than a
technical hitch — but every word of Kelley Rourke’s clever libretto
was crystal clear. Shore presented Rourke’s wittily rhymed medicinal
claims — “You reek of halitosis/ Then take a couple of doses”
— with consummate mastery, although (if one was being harsh) one might
accuse him of trying a little too hard at the risk of straining the voice. The
subsequent wedding celebrations were pure MGM gold. Impersonating Elvis,
Shore’s line ‘I’ve got a little ditty’, drew the
largest laugh of the night; and when Adina joined him ‘on-stage’ in
the diner, there was considerably more knowing interaction between them than
was apparent in her exchanges with the younger heart-throb Nemorino.
Adina’s Marilyn drawl might have been a bit too self-knowing, but Tynan,
and Miller, pulled it off, just staying short of overkill.

As a gum-chewing GI, David Kempster’s Belcore swaggered and boasted
his way, temporarily to Adina’s heart. Julia SporsÈn’s Gianetta was
sparkling and full of life. 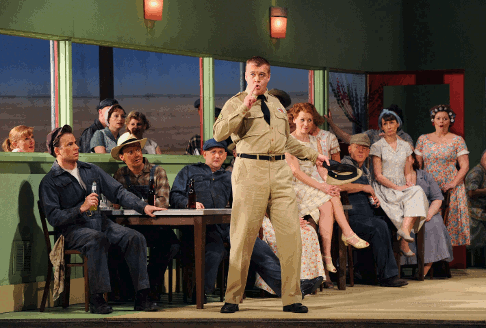 David Kempster as Belcore and company

Miller and Bywater had clearly, and effectively, thought hard about the
realism of this production. But there was one incongruity: the inconsistency
between the text and its delivery, with regard to accent. It was decided (so
the programme told us) to use Americanisms (‘a knuckle sandwich’,
‘hello cupcake’), to pay homage to Porter and Sondheim (‘an
elixir with a kick, sir’), and to attempt American accents throughout.
The problem was that no one seemed to have told the chorus, and the principals
frequently only remembered at the ends of phrases, which made Tessier’s
native Canadian burr seem rather out of place.

Another problem was the over-enthusiasm of the conductor. Spaniard Pablo
Heras-Casado, who enjoyed himself just a bit too much, encouraging the
orchestra too excitedly and destroying the balance between stage and pit.
Moreover, the tempi were often too slow: fine for the patter songs but fatal in
the acts’ final choruses which should whip up a froth. 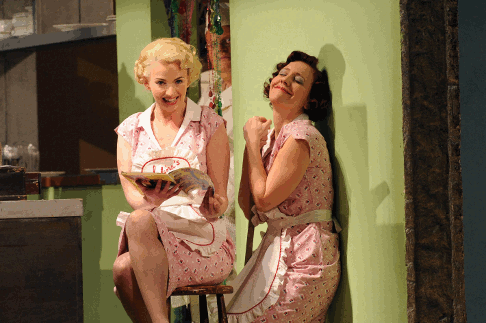 Sarah Tynan as Adina and Julia SporsÈn as Gianetta

So, this was a charming, folksy show. Miller’s humour was of the
gentle kind — Nemorino turning momentarily into a bass-baritone when
swigging the elixir, the outside loo flushing incongruously as Gianetti
announced Nemorino’s financial good fortune. Dulcamara’s slugging
of his own elixir when he observed the ladies chasing after Nemorino drew an
appreciative chuckle from the audience. However, despite its
‘silliness’, there are some shades of darkness in this work —
innocence is threatened by deception, guileless by guilt, and love seems
indissolubly linked to money; but such shadows were kept well under wraps in
this affectionate, enjoyable show.

All photos by Tristram Kenton / ENO