As our hapless politicians
stake the security of future generations, and self-absorbed bankers obsessively
take their chances with the populace’s finances, it sometimes seems that
the world stability hangs not on the spin-doctors’ platitudes but on the
spin of the Dow Jones’ roulette wheel.

Dostoyevsky’s 1866 novel The Gambler provided Prokofiev with
the inspiration for this tale of economic and emotional ruin. The drama takes
place in an hotel in a fictional German spa resort, Roulettenburg —
reminiscent of the Baden-Baden where Dostoevsky recklessly propelled himself
into bankruptcy. As the twinkling signs adorning the front curtain
unambiguously declare, the Casino is the place to be, and gambling the only
occupation to distract the assorted European residents from their ennui and
snobbery. 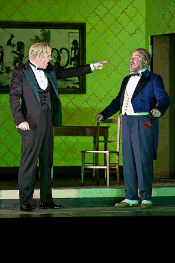 Kurt Streit as the Marquis and John Tomlinson as the General

Alexey, tutor to the widowed General’s children, is passionately in
love with the latter’s step-daughter, Paulina. Unaware that she is
indebted to the Marquis, Alexey has tried to ease her despair, and win her
heart, by gambling with the proceeds from her sold jewellery, but he has lost
all the money. Meanwhile, the impoverished General waits impatiently for his
elderly aunt, Babulenka, to die, so that he can inherit her fortune, marry his
courtesan mistress, Blanche, and relieve himself of his own obligations to the
Marquis. Unfortunately, Babulenka proves rather more robust than her relations
had hoped or anticipated; she arrives at the spa town to recuperate, and is
herself enticed into the gamblers’ den. As she frits away the
family’s inheritance, Blanche turns her attentions to more lucrative
suitors, while the General collapses in despair.

Alexey finds Paulina in his hotel room; she is being pursued by the Marquis
for her outstanding debts, and begs him to find the money to save her from
selling herself on the marriage-market. In the casino, Alexey has an amazing
streak of lucky and breaks the bank. Yet, when her offers Paulina the money she
angrily declines; her love cannot be bought. By this stage, Alexey is so
consumed with the ecstasy of his winning streak that he forgoes all thoughts of
human love for the thrill of the roulette wheel.

Determining to imitate the naturalist idiom with which Mussorgsky
experimented in Boris Godunov, Prokofiev produced his own libretto,
here rendered in David Poutney’s translation which retains the unrhymed
dialogue of the original. Essentially the text is a stream of continuous
recitative — although on this occasion the diction was so poor that one
couldn’t actually hear a word! — and this relentless melodic
uniformity is one of the problems which any production must overcome. For,
while there is much power in Prokofiev’s score it is not immediately
touching or involving and the listener can feel rather distanced from the
onstage action, at least in the opening two acts. 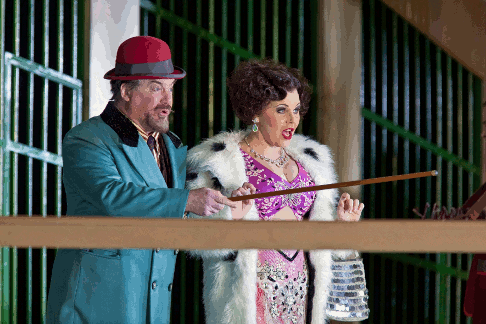 John Tomlinson as the General and Jurgita Adamonyte as Blanche

Richard Jones does his best to draw us into the characters’ dilemmas
and traumas. He imaginatively updates the action to the 1930s, and the dÈcor is
stylishly and imaginatively designed by Antony McDonald. A sharp perspective
ensnares the audience’s eye, mimicking the irresistible force of the
addict’s compulsion and the undeniable gravitational pull of the roulette
ball’s progress. This is a perfect visual match for Prokofiev’s
unyielding score, its driving ostinati conveying the inescapable urges and
cravings of the gamblers who stake all on the roulette ball’s destiny. In
this regard, the composer saves the most chillingly evocative instrumentation
for Act 3, in the Casino, where the clientele and croupiers of Jones’
casino scuttle about like demented pinballs, their lurid costumes flashing and
spinning, before taking their places in rigid rows like the resting columns of
a one-armed bandit.

Jones’ garish, anti-naturalistic staging highlights the extremism of
Dostoevsky’s vision. In Act 1 the leisured guests stroll through the
zoological gardens; barred windows denote the cages, but who is looking in and
who out? It’s a grotesque menagerie, for morally misshapen disreputables
— symbolised by a dancing seal (heroically performed by the costumed
dancer), whose ghastly writhing betokens the bestial urges to which all
succumb. On a projection screen, a tiger paces back and forth impatiently,
trapped in its small cage, hinting at the cruelty and viciousness which lurks
beneath the aristocratic veneer of the hotel lounge. 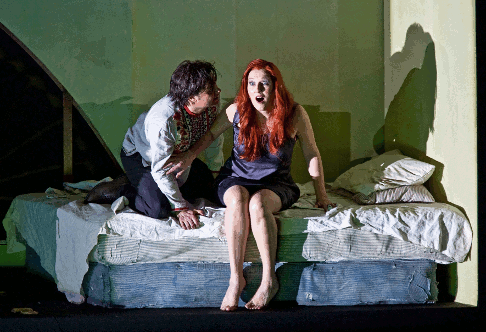 The dramatic temperature is at boiling even before the opera begins, and
there is little light and shade in the opening acts. There is a large ensemble
cast, to which Jones added even more characters — seen, for example,
running feverishly across the stage during the impassioned overture, and
returning during the final scene to intrude on Alexey’s closing number
(and somewhat diminishing the poignancy of his rejection by Paulina). The
revolving doors of the hotel fling a continual stream of guests into the
lounge, and the atmosphere is tense and frenetic. However, Prokofiev’s
score does possess moments of lyricism, most noticeably for Alexey, Paulina and
Babulenka who, with a nod in the direction of the literary original, are the
most sympathetic characters. Dressed like Russian peasants (costumes by Nicky
Gillibrand), they intimate a nostalgia for a Russia unsullied by European vices
— indeed, having lost all her wealth, Babulenka returns to her Russian
village — and exhibit real ‘human’ emotions, conjured by
brief melodic fragments which float above the grinding dissonances of the
obsessively busy score.

Tenor Roberto Sacc‡, as Alexey, was in powerful voice, and certainly had the
necessary stamina for this demanding part. He injected drama and emotion into
the role at every opportunity, finding a variety of colourings to reflect his
transformation from guileless lover to heartless addict. In the role of
Paulina, Angela Denoke displayed a strong, well-centred tone, appropriately
suggesting wilfulness, confidence and, at the close, honest
self-recognition. 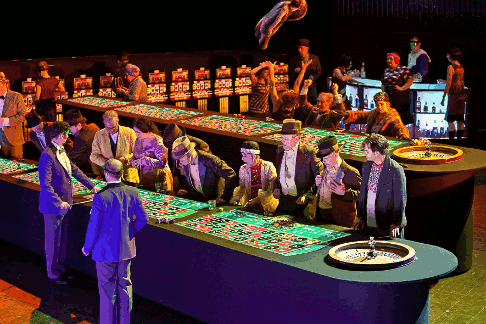 Scene from The Gambler

Making a ‘Lady Bracknell-esque’ entrance, Susan Bickley was a
vigorous, life-loving Babulenka. She was both strident and tender, as the drama
demanded; and the contrast between her initial headstrong independence and
subsequent disappointment was touching and full of pathos. Strong, sustained
characterisation was also a praiseworthy feature of baritone Mark Stone’s
mysterious Mr Astley and the Marquis of tenor Kurt Streit. Most impressive of
all, John Tomlinson’s General was a superlative presentation of a defeat
and delusion; his act 3 mad scene was a tour de force.

In this ‘recitative opera’ it is in fact the score which tells
the story. The ROH orchestra were once more on tremendous form, as Pappano
relished the pounding rhythms, driving tempi and the thick brassy timbre,
expertly exercising control in the pit as the characters on stage spun into
moral chaos.

By the final act, the mercenary financiers — the so-called
‘gentlemen’ — have gambled with Fate and lost both their
money and their souls. Alexey has thrown away his innocence and exchanged
Paulina’s love for a banker’s safe. This is not just a social
satire but a real human tragedy. All are in the grip of vices which consume
them. You can’t beat the odds or evade your destiny, and we ignore this
disturbing lesson at our own peril.

All photos by Clive Barda courtesy of Royal Opera House