However, while the evening at Carnegie Hall was more
theatrically compelling than most semi-staged performances, the compromise of
shortening the three-act opera into two acts of music-theatre with a crossover
cast seemed better intended than it was actually effective. Firstly, by
replacing the connective recitative with narration from novel (read by Jane
Fonda), Gordon’s musical diction was made less effective and, moreover,
Michael Korie’s rhyming libretto suffered in comparison to John
Steinbeck’s original prose. Secondly, changing the theatrical structure
of the evening necessarily altered the musical architecture. Reoccurring
motives effectively became musical theatre reprisals rather than the thematic
development post-Wagnerian opera audiences expect. At its best,
Gordon’s score evoked Ragtime more than Porgy and Bess.

The crossover casting, made possible by across the board sound enhancement,
was inspired in some instances but minimized the vocal demands on the singers
and did little to establish The Grapes of Wrath as an equivalent to the great
American novel. Christine Ebersole was in character from the moment she stepped
onto the stage, much more so than most of her counterparts from the world of
opera and concert repertoire. That said, while her brief appearance as the
waitress Mae should be lauded for the character arc created in a single scene,
Ebersole’s vocalism on Monday evening would be considered lacking on
either the Broadway or the operatic stage. Victoria Clark and Steven Pasquale,
both from the original cast of Adam Guettel’s The Light in the Piazza,
fared better. As Ma Joad, it was Clark, rather than headliner Nathan Gunn, who
proved to be the both the musical and dramatic lynchpin of the evening.
Pasquale used Al Joad’s short second act aria “Hooverville”
as an opportunity for cynical showboating ‡ la Gershwin’s Sportin’
Life.

Among the opera singers in the cast, Gunn had the easiest singing and, not
coincidentally, the most fun with his musical material. His duet with Sean
Panikkar (stepping in for Anthony Dean Griffey as the preacher Jim Casy)
featured the evening’s most exciting vocalism. Moreover, Panikkar dealt
with the Jiminy Cricket text of his aria “Things Turn Around” with
considerable style and dignity. It was unfortunate to hear such a fine
singer’s phrasing and coloring flattened by the so-called acoustic
“enhancement.”

In order to elide three acts into two, Gordon and Korie had to cut much of
the musical and dramatic exposition and development. Therefore, the aria
establishing Jim Casy’s character was actually his swan song. This was
also the case with Andrew Wilkowske in the role of Noah. Perfectly cast,
Wilkowske carried off the evening’s most challenging scene with sweet
singing, sensitive acting, and overall aplomb. As Uncle John, Stephen
Powell’s performance was fully realized both dramatically and vocally.
Within the ensemble cast, Matthew Worth played three parts, but should be
especially commended for his turn as the Ragged Man. 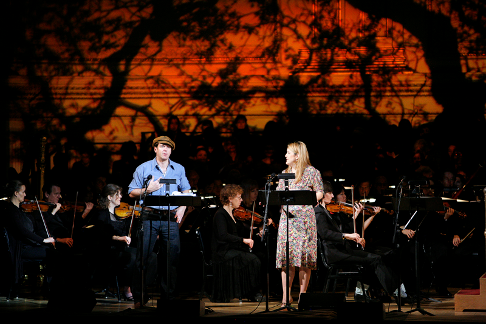 Costuming by Jacob Climer and projections by Wendall K. Harrington helped to
actualize the opera’s considerable theatrical potential. Inexplicably,
though, Elizabeth Futral showed no visible signs of pregnancy as Rosasharn.
Some of the projections, a mix of black-and-white period footage and color
representations of Dust Bowl meteorological phenomena, were more literal than
evocative (as in the case of the burning crops during the riot at Hooper
Ranch). The evening’s rather abrupt ending, in particular, could have
been made more poignant with different projections and lighting. Perhaps this
was due to the limitations of the concert stage – a full orchestra of
music stand lights took away from the poetry of Rosasharn’s “one
star” in the night sky as a beacon of American hope – or, more
likely, the rushed feeling of condensing a five hours of original music into
two acts.

In either case, as an evening of music-theatre Gordon’s The Grapes of
Wrath shows promise. Since its original production at the Minnesota Opera in
2007, members of the original team, including director Eric Simonson, have
overseen the subsequent productions at Utah Opera and Pittsburgh Opera as well
as this week’s performance at Carnegie Hall. If new creative teams can
work with the material as effectively as singers like Andrew Wilkowske, Sean
Panikkar, and Stephen Powell have assimilated their roles, then audiences have
something to look forward to.

Clearly, Gordon and Korie are open to the idea of re-tooling their opera in
order to make it more viable for today’s opera houses and audiences. It
would be interesting to see if, rather than featuring a large orchestra and
expanding the use of the chorus, the opera could be centered around a core
ensemble cast ‡ la John Corigliano’s recent reconfiguration of The Ghosts
of Versailles. After all, the difference between a novel and a musical score as
a source document is that as a book stands the test of time it eventually
becomes a definitive example of something specific within its literary canon.
In order for an opera to become part of the standard repertoire, the score and
libretto need to inspire many different interpretations so that multiple
successful productions may be mounted. The Collegiate Chorale’s concert
version of The Grapes of Wrath should definitely be considered a success and a
step towards establishing both the composer and the work within the American
opera repertoire.

All photos by Erin Baiano courtesy of The Collegiate Chorale