Has it something to do with the coming to
power of irresponsible corporate executives? The trend doesn’t make the
works seem more immediate, more real to me — just tiresome to look at.

If you haven’t given a certain opera in 113 years, wouldn’t you
want to sell the piece? Make it attractive to lure new audiences? I
never want to see the Met’s production of Thomas’s Hamlet
ever again, not if Melba returned in tip-top form to put it over — though
in general, just say “obscure, once-popular overblown nineteenth-century
vocal farrago” and I’m, like, totally there. (Robert le
Diable anyone? But no — we can guess what modern directors would do
with the ballet of Satanic nuns. Probably drag, and not even good
drag.) 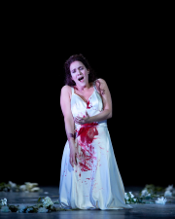 But Hamlet is supposed to take place in the Renaissance grandeur of
Elsinore — and what do we get? Basement rooms in stained plaster,
barf-green doors, bare brick pilasters, the ugliest battlements this side of
the Brooklyn Navy Yard. I don’t know where the designers went to school,
but I’d be ashamed to put a sock hop in here, never mind the festivities
of a new-married king. Hamlet’s self-dramatizing misbehavior
doesn’t stick out in such digs — he’s no stranger than
everything else, and Claudius and Gertrude are sordid in good company. The
production is by some guys named Caurier and Leiser, borrowed from Geneva, whom
we hope have outstayed their work visa and been deported. The dreadful sets are
by Christian Fenouillat, the uncomfortable and unattractive costumes by
Agostino Cavalca — well, at least they are better than Miuccia
Prada’s swishing Attila shmattas.

The designers of the Met’s Trovatore and Tosca and
Lucia — and Don Giovanni, for that matter — were
similarly glamour challenged. The last truly elegant and appropriate set I can
recall in a Met production was that for Gounod’s RomÈo et
Juliette. And I don’t much like RomÈo et Juliette, and no
one who appears in that set ever seems to sing anything there but Gounod. It is
very tiresome.

In Hamlet, we finally get an attractive stage picture in Act IV
(yes!): OphÈlie crouches in a grand upholstered sofa near a (lowered) crystal
chandelier (representing a frozen fountain?), but as the scene calls for a pond
in which she can drown herself, this, too, is puzzling. She spends the scene
slashing her wrists and breasts with a knife and the chandelier rises to the
ceiling, symbolizing her unlikely — isn’t suicide a mortal sin?
— ascent to heaven. I’m not making this up, you know.

By 1868, the phenomenon of French grand opera was winding down, at least in
terms of Paris premiers — though Verdi’s Aida, which
topped them all, was still to come, and the grandest opera composed by a
Frenchman, Berlioz’s Les Troyens, would not reach L’OpÈra
till well into the twentieth century. It was in 1868 that Ambroise Thomas,
fresh from the triumph of his Goethe-based opÈra-comique,
Mignon, which would hold the stage for a hundred years, produced
Hamlet, a late but at the time entirely successful gasp of grand
opera. 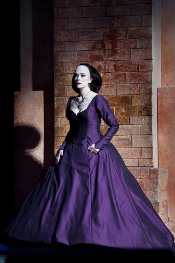 Hamlet has all the grand opera trappings: big star parts, big solo
display pieces (well, at least one — OphÈlie’s famous mad scene),
unusual orchestrations, spectacular effects, small but effective minor roles
(Thomas pounced on Shakespeare’s merry Gravediggers), and a ballet
— omitted at the Met. Just as well: It’s a long evening, and with
only one intermission in five acts, it feels even longer.

Hamlet was a great hit in Paris and elsewhere, but it has always
had problems in the English-speaking world. We know Hamlet and
we’re not sympathetic to changes in the plot that undercut the familiar
story. The same attitude kept Verdi’s Macbeth a rarity
hereabouts until the mid-twentieth century — Othello and
Romeo and Juliet worked as operas for us because the stories were
Italian melodramas to begin with and suited to operatic treatment. Too, Verdi
had Boito for his Otello and Falstaff, and Boito knew his
Shakespeare.

Thomas’s librettists, CarrÈ and Barbier, who had already done the
musical number on so many classics, retained the Ghost and the Gravediggers and
the most famous soliloquy — they, and Thomas, knew enough to set
“To be or not to be” as declamation and not make a verse
chanson out of it — but they omit Hamlet’s wilder feats of
mayhem, the murder of Polonius, the trip to England, the duel with poisoned
swords. Laertes has been shredded and Polonius all but eliminated —
OphÈlie goes mad not because her lover has slain her father but merely for love
— which Shakespeare might not think credible but is business-as-usual in
opera. Then, in building up the soprano and mezzo roles to grand opera stature,
the focus on Hamlet’s own dilemma has been watered down. Gertrude’s
guilt is not, as in Shakespeare, ambiguous — here she states it, is
obsessed with it. And the Ghost won’t stay dead — like a figure in
an American horror flick, he keeps popping up, is even responsible for the
slaying of his brother. So who needs Hamlet the prince?

A soprano vehicle back in the day — no one but OphÈlie gets a major
scena — Hamlet is not entirely without interest, and might even
be a hit with attractive sets and if cast to strength, which it has not been.
You can’t do grand opera on two stars and two fadeouts. It needs better
than that. These are virtuoso roles, so designed. We’ve had such
sleepwalking Aida casts over the years that we’ve forgotten how
singer-driven grand opera used to be — and, at the Met, Aida at
least has gaudy sets! 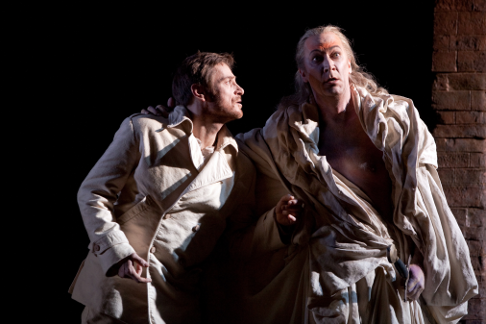 The finest singing of the night came, unquestionably, from the most
unexpected player, Marlis Petersen, replacing an indisposed Natalie Dessay as
OphÈlie. Dessay was a prime mover and motivation to bring the opera here
— no one else would have thought of doing it, and it has always been a
soprano vehicle at the Met, for Sembrich and Melba in the old days. (The last
time New York saw it, at the City Opera some years ago, it was a vehicle for
Sherill Milnes, who performed the title role splendidly, a Shakespearean
Trifecta with his Iago and Macbeth.)

Dessay’s abrupt withdrawal from a role she was planning to drop from
her repertoire in any case turned out to be a happy occasion. Marlis Petersen
has one of the most beautiful and accurate coloratura sopranos now before the
public, a cool, clear, easy sound like a rippling stream. One or two top notes
seemed forced, but in such a way — and at such a point, on both the
broadcast and in the house three days later — as to suggest these were a
characterization choice, meant to imply her gathering hysteria. Her trill is
imperfect but her runs are ravishing; nothing is tossed away with that “I
can’t be bothered to sing each note, I’m acting” shrug so
common in this repertory. I would love to hear her in Lucia,
Puritani, Sonnambula, Lakme — but, alas, she
seems herself to prefer more modern music requiring far more precise
musicianship, such as Lulu (which she will sing here in May) and
contemporary operas by Reimann, Henze and Trojahn.

In the play, Queen Gertrude’s remarks tend to be brief and on target
— her only poetic flights come in describing Ophelia’s death, of
which speech she is robbed in the opera in order to turn it into the
soprano’s mad scene. Nonetheless, a secure dramatic mezzo can make quite
an effective thing of the queen here, and that Jennifer Larmore, still handsome
and dressed to kill, did not do so must be attributed to a dullness, a
tunelessness, that afflicted her in every register. There was nothing musical,
nothing attractive, nothing precisely on the note in the notes she produced;
she gave no pleasure. The old plummy Larmore sound was never in evidence.

James Morris, who has been singing at the Met for forty years, starting with
Mozart, passing through Bellini and Verdi to Wagnerian triumphs, now suffers
from an occasional wobble and a pervading dryness of timbre, but he still cuts
an imposing figure, visually and vocally — when he sings, we know
he’s there and we know he’s the king. Still, when David
Pittsinger sang the Ghost’s music, I wished the brothers might exchange
roles as they had exchanged crown and queen. Toby Spence was rather wasted on
the small remains — a trio and a duel-duet — of LaÎrte, and glum
Richard Bernstein and lyrical Mark Schowalter made their scene as the
Gravediggers seemed far too brief.

In default of the regularly scheduled prima donna, Simon Keenlyside was the
headliner of his Hamlet — as he deserves to be.
Keenlyside’s voice can seem light and gracious in lieder recitals, then
turn so dark and shadowy that the radio listener wonders if it is he or James
Morris. We have not had him nearly as often in New York as we might like, but
the raves that have met his Billy Budd, Prince Andrei and Rodrigo di Posa in
London and on the continent may puzzle Met listeners. His voice, I fear, is not
big enough for the house — his acting is too subtle for its spaces. He is
never casual for a moment, each word and gesture are considered, and we are
often riveted (when he is terrified of the Ghost) or unnerved (when he capers
unpredictably before the king and queen), but the beauty of his singing in
other roles was given short shrift here. The rumbustious drinking song with
which he celebrates the king’s reaction to his strategic
play-within-the-play did not ring out. It might be more interesting to hear his
sound from upstairs, if one could do that while studying his
fascinating portrayal of the character from closer up. I’d go to another
performance of the opera if I could endure those awful sets again.

Louis LangrÈe, who leads the Mostly Mozart forces in his summer job,
understands the machine that is grand opera: tight rhythms, driving power when
the chorus is to be loosed upon us, and the supportive playing of a variety of
tone colors by a variety of instruments required by the showpiece arias that
give a work like Hamlet its texture and distinction.

All photos by Brent Ness courtesy of The Metropolitan Opera