However, the bravo’s — more sedately stated — were in the majority, and their enthusiasm declared the success of this first production of Wagner’s Ring des Nibelungen in the company’s 25-year history. (Price tag: $32 million.)
This does not imply, of course, total agreement even among Freyer’s fans. Indeed, intermission conversation was rich in questions on the director’s intentions and on the wealth of images that made his stage a continually shifting panorama often with little obvious reference to events in the libretto — questions that will continue to perplex the audience as the production now moves into three complete cycles set for May and June.
Yet this Ring, no matter how it is judged, is a landmark — especially for the United States where it is the first experience of radical Wagnerian Regieoper yet encountered. And even those who prefer traditional Wagner could not withhold their praise for an exemplary cast that under the director of veteran Wagnerian James Conlon who made this a memorable Ring from its beginning a season ago to its conclusion on the Easter weekend.
It’s clear that Conlon cares and that he was out to give Los Angeles — and the United States — a Ring to remember. The production is not only a singular triumph for Los Angeles Opera, it is further a milestone in the staging of Wagner in America.
The opening scene of Gˆtterd‰mmerung with the Three Norns trying in vain to weave the fabric that guaranteed some kind of future for Walhalla and its now despondent residents brought few surprises to those who had seen the first three installments of the Freyer Ring. Wotan’s missing eye remained in evidence, and the Tarnhelm — a gilded top hat — was suspended above the stage. Lighted tubes in various colors remain Freyer’s top toy.
There was thus little in the director’s immense bag of tricks that the audience had not already seen, and the question was now how successfully Freyer might bring the cycle to a meaningful and satisfactory conclusion. Freyer reduced the Gibichungs to near-comic-book figures, singing for the most part behind huge cut-outs. The incestuous relationship between siblings Gunther (Alan Held) and Gutrune (Jennifer Wilson), now a given in most Ring productions, was hardly noticeable as attention focused on Hagen, now the master of evil in Gˆtterd‰mmerung.
Of Hagen, deliciously sung by veteran bass Eric Halfvarson, Freyer made a paraplegic dwarf who rarely left his seat at stage right, where he operated something of a remote to cause things to happen on stage. Unable to stab Siegfried in the usual manner in Act Three he allowed a bar of yellow light to fall and bring down the hero. Hagen’s equally evil men, on stage throughout Act Two, framed Br¸nnhilde’s cry for revenge and made this the finest hour of the entire cycle. 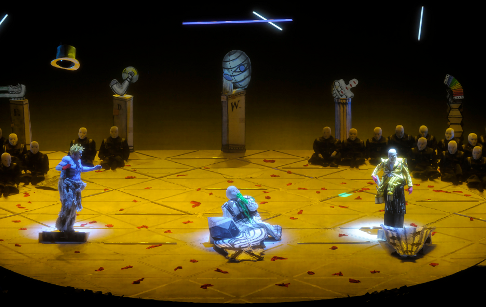 John Treleaven (Siegfried), Alan Held (Gunther), Eric Halfvarson (Hagen)
Linda Watson, a major Br¸nnhilde of the past decade, brought unusual anguish to the frustrating helplessness of a woman now bereft of divine powers. (And one wonders why Siegfried makes such limited use of the magic that he had acquired through Ring and Tarnhelm, which he had used only to win Br¸nnhilde for weakling Gunther.) As the wrongly wronged woman Watson was at her dramatic — and tragic — best in achieving the dramatic intensity that made this act breathtakingly engaging.
No procession carried the dead Siegfried from the stage. The mortally wounded John Treleaven walked rather from sight, while a black-clad figure — his soul? — collapsed at Watson’s feet. The Funeral March, although played with epic sweep by Conlon, was thus without its usual focus. Moreover the powerful Immolation, in which Br¸nnhilde puts the entire story of the Ring together, suffered from Freyer’s inability to control excess. 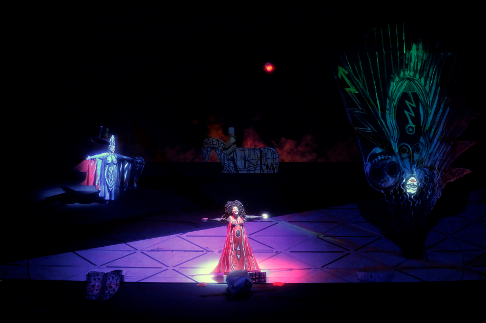 Back: Michelle deYoung (Waltraute), Front: Linda Watson (Brunnhilde)
Flames, a horse rising at the rear of the stage and immense ravens flying across the scrim were more competition than Watson — and Wagner — could counter. Although the soprano’s delivery was belabored, Conlon evoked an exuberance from his spectacular orchestra that ended the performance with the metaphysical consolation that Nietzsche called the essence of Greek tragedy. Once one adjusted to the Harpo Marx curls that Treleaven had sported in Siegfried, he sang the ill-fated hero with stamina and lyric loveliness as the drink that had destroyed his memory wore off and he recalled the promise with which he had set out on his venture.
Highest vocal marks, however, went to Michelle DeYoung for her expression of Waltraute’s sisterly concern in her attempt to avoid impending tragedy. One of the great Wagner and Mahler interpreters of today, DeYoung also sang the Third Norn, joined in the opening scene by Jill Grove and Melissa Citro. Richard Paul Fink was a definitive Alberich.
Beginning with Wolfgang Wagner’s revolutionary Ring that re-opened the Bayreuth Festival in 1952 directors have attempted to de-mythologize the work, to make clear that these are not gods and giants, but confused humans like the rest of us. Achim Freyer has rather made a daring effort to re-mythologize the Ring — to elevate it beyond the every-day to a new level of metaphysical significance. His may not be a Ring for everyone, but it is not to be written off as missing the Wagnerian mark. 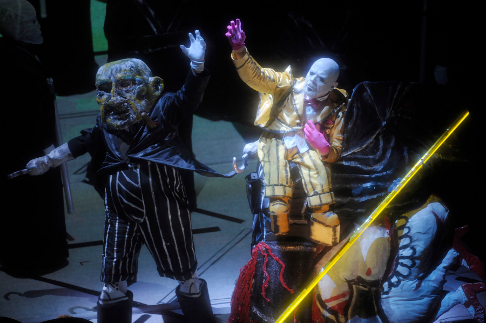 While in Germany it is Wagner’s Parsifal that dominates the Easter weekend, it was significant — if coincidental — that Los Angeles paired Gˆtterd‰mmerung at the Opera with a stirring performance of Gustav Mahler’s Fifth Symphony across First Street at the Los Angeles Philharmonic in Disney Hall. The two works, heard in tandem on April 3, made for an impressive weekend. Given the hype surrounding the appointment of Gustavo Dudamel as music director of the Philharmonic, it was important to hear the orchestra under another conductor — in this case guest Semyon Bychkov.
Soviet-born and -trained Bychkov, now at home with Germany’s WDR Orchestra in Cologne, is an elegant and able conductor who took, however, a largely understated view of Mahler’s 1904 score. This was classic Mahler, if one will, contrasting sharply with the Romantic — and often bombastic — view of the composer commonly encountered today. 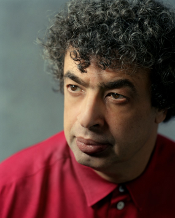 Fascinating was the manner, in which Bychkov kept one aware of that undercurrent of gnawing contradiction that is so much a part of Mahler — that saying “Now, this isn’t as overwhelmingly lush as it seems” that is the mark of a Mahler master. Bychkov was especially convincing in the delicate transparency that he brought to the brief Adagietto, a movement often reduced to near-trivia through its over-popularity. (It was the major theme of Lucino Visconti’s undoing of Thomas Mann’s Death in Venice.)
Trumpeter James Wilt set the tone for the performance with the solo that opens the score, and — happily — Bychkov moved horn William Lane to the front of the orchestra for his seminal role in the sometimes rustic Scherzo.
It was, however, the Philharmonic itself that was the glory of the Mahler heard on April 3. This is obviously one of the world’s top orchestras, due in no small measure to the devotion brought to it from 1992 to 2009 by music director Esa-Pekka Salonen. It is hoped that Dudamel realizes the challenge in Salonen’s legacy and keeps the Philharmonic at its current level of excellence.
The Los Angeles Opera stages three complete cycles of Achin Freyer’s production of Wagner’s Ring des Nibelungen between May 29 and June 28, 2010. For information and tickets,1972-8001 or visit its [web site](http://www.LAOperaRing.com/DYO).
Wes Blomster

Except as otherwise indicated, all photos by Monika Rittershaus courtesy of Los Angeles Opera