As imagined by the directorial team of Moshe Leiser and Patrice Caurier,
Turco recalls the heyday of 60’s Italian cinema, with
images unashamedly evocative of La Dolce Vita,
8-1/2 et al, and comedy rendered in the vein of a rather ribald
sitcom; I Love Lucy with a fully functioning queen size bed,
instead of those two maddening twins, if you will. (Where was Little Ricky
conceived in that chaste boudoir?)

Mssrs. Leiser and Caurier waste no time in jump-starting the action with
(mostly) meaningful busy-ness that is (mostly) cleanly executed by the
well-tutored ROH chorus under the direction of Renato Balsadonna. Amid much
amassed rushing on- and off-stage, and much laying on of (mostly) primary
colors on gliding flats, the all-important Pirandellian narrator Prosdocimo is
dynamically introduced, and he immediately engages the audience directly in his
quest to write the very opera we are viewing. 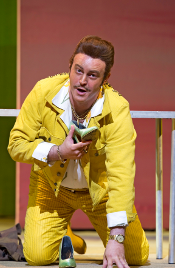 The inventiveness never flags, and it is to the directors’ credit that
they manage to (mostly) avoid upstaging stars and story with distracting
business. And when they score (which is often), they score big. Can there have
been a more spectacular star entrance than that devised for the white-clad
Selim, back to us, atop the massive prow of a yacht that tracks into view
upstage, complete with pop-up Turkish flag? As the bass turns around to let us
size him up visually just before he sings, it completes a perfectly judged
dramatic moment. The preening Narciso rides in on a motor bike, another telling
character introduction. Would that Fiorilla’s rather weak entrance have
had the same cheeky punch. Still, the lady gets to roll around on the
afore-mentioned bed in a passionately madcap sex show with her horny Turk, that
is, until Don Geronio lurches through the door effecting a highly comical
‘show-itus interruptus.’

Principals arrive for the meeting on the beach on all mode of transport,
snazzy sedan, cheap compact, and the tenor-topped Vespa; and Selim’s
subsequent making out with Zaida in the back seat was a goof that resonated
with 60’s park-and-snog atmosphere. The cast was exceptionally well
blocked and the whole evening was crafted with well-defined character
relationships as evidenced by meaningful, varied stage business.

That said, there was an occasional mis-step. Or minced step. When the chorus
does those supposed-to-be-funny-pattering-feet-run-abouts, well, we are drawn
out of an otherwise honest evening by the falesehood of the movement. This
Turco is so overwhelmingly funny and delightful because of its
honest trust in the material, that such insincere applications matter. I would
urge the team to re-look the staging to eliminate those few fleeting
distractions. And an inherent problem in today’s’ opera world
remains that the (clever) surtitles sometimes get the laugh in lieu of, or in
advance of the singer/director. Maybe delaying the punchline projection would
give the performer the advantage? 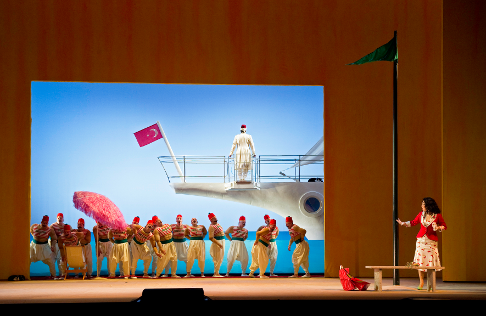 Scene from Il turco in Italia

The directorial duo was given stellar support in their efforts starting with
an eye-popping, riotously colorful set design by Christian Fenouillat. The
pleasing clutter and motion of flats at the top of One filled the space with a
volatile, multi-layered geometric design, with floating blocks of color
reminiscent of, say, Mark Rothko. While the texturing of the set pieces seemed
a little rudimentary on occasion, there is no doubt that it functioned
beautifully, constantly morphing into such surprises as the fold out bed room
(complete with a painting of an erupting Vesuvius over the head board), and a
60’s Kitsch disco complete with mirror ball for the party scene.

Of equal quality were the well-gauged costumes by Agostino Cavalca. Fiorilla
was got-up as a Gina Lollobrigida stand-in and her glamor knew no bounds.
Va-va-voom. Narciso’s yellow Elvis-meets-the Pillsbury-Dough-boy
pop-rocker jumpsuit was giddily prankish. And the manly, well-tailored costumes
for the title character managed to make him look handsomely exotic rather than
stock-issue-silly. Indeed, the entire ensemble of performers was clothed in
character-specific attire in a well-calculated color palette. Christophe
Forey’s spot-on (pun intended) lighting was a critical component in the
over-all triumph of design.

As Selim, Ildebrando d’Arcangelo swept all before him with a
commanding presence, good comic sensibilities, amorous abandon, and oh, yes, an
imposing world class bass voice with the suavity and richness of a dark Godiva
chocolate sauce. He must own this role right now, so definitive was his
performance.

Young Aleksandra Kurzak had much to recommend her as Fiorilla: a secure,
silvery lyric soprano with excellent agilty; a lovely physical appearance; a
supremely confident stage demeanor; superior acting skills. This was a
beautifully sung account, cleanly and effortlessly delivered, save for a bit of
sraight-toned stridency that crept into the very loudest notes above the staff.
However, unlike her other successful repertoire (Adina, Susanna, Norina),
Fiorilla asks for that extra measure of Divadom that is not yet hers to
command. This is a vehicle that cries out for the unique fire-power and
charismatic gifts of a Callas, a Sills, a Bartoli. If only Ms. Kurzak could go
the the Evita shop and buy a “little touch of star
quality,” for she decidedly has all the other goods and then some. Ah
well, she is young and gifted. My bet is that time and experience will find her
growing ever further into this role assumption

If his securely sung and impersonated Prosdocimo is any evidence Thomas
Allen’s illustrious career remains an evergreen joy. The buffo Alessandro
Corbelli acquitted himself exceptionally well as the weary Geronio, missing
nary a nuance as the demoralized spouse. Leah-Marian Jones was a lovely, and
lively Zaida, her plummy vocalizing a wonderful complement to
Aleksandra’s limpid soprano. Collin Lee’s light-voiced tenor had
all the pleasing notes in place as Narciso, although there was occasional
gear-shifting around the passaggio that made for a handful of clumsy musical
phrasings. Jette Parker Young Artist Steven Ebel made an assured impression as
Albazar.

On this occasion, the pit seemed off form initially with Maurizio Benini
leading a rather scrappy overture. There was little fire or presence at the
downbeat, and the horn solo was not only a hair under pitch but also sounded
like it was well off-stage. It wasn’t until the jaunty string figure
re-appeared that the band seemed to settle into a more inspired comic frame of
mind. There were also some rhythmic mis-connects with the chorus getting ahead,
then Geronio in his patter, then the chorus again, then Narciso, that are
atypical of Covent Garden’s high standard. However, by a third of the way
into Act One the musical ensemble settled down, and the whole thing began to
sparkle. No doubt future performances will have righted these minor
imperfections.

All told, London’s Il Turco in Italia is an engaging
evening of witty stagecraft, rife with winning portrayals, and featuring secure
singing from some of the day’s top artists. In short, ROH has served up a
veritable Turkish Delight.

All photos by Clive Barda courtesy of The Royal Opera