Admirers of the company and the composer may look back
with happy nostalgia upon Sills, Forrester and Treigle in Giulio
Cesare, Carol Vaness and D’Anna Fortunato in Alcina (the
mylar one), Lorraine Hunt and David Daniels in Xerxes, Daniels and
Christine Goerke in Rinaldo (with exploding harpsichord), Goerke in
the second Alcina (the one with the sexy trees), David Walker in
Flavio, Bejun Mehta — his New York debut — in
Partenope and, later, in Ariodante and Orlando,
Sarah Connolly in Ariodante, Nelly Miricioiu in Agrippina,
and Elizabeth Futral and Vivica Genaux (playing Marilyn and Jackie) in a madcap
Semele. It is wise of the company to revive one of these works in its
shortened season this year, to remind us of a specialty we’d come to
appreciate on this side of the plaza.

The work chosen for revival was Partenope, an opera seria
that combines the usual musings, tune by tune, on this or that aspect of love
with a not-too-serious story of the founding Queen of Naples (a retired siren),
her heart and hand sought by three altos and a tenor. Confusing matters only
moderately (for a Handel libretto) is the fact that only two of the altos are
male (castrati in Handel’s day, countertenors now); the other is a woman
in disguise, pursuing the man who done her wrong — one of those very
countertenors. At the evening’s climax, after multiple gyrations, each
nuance of passion depicted in a da capo aria, Eurimene/Rosmira obliges Arsace
— who has loved not wisely but too often — to fight him/her in a
duel. This means Arsace has the choice of manner of combat, and he chooses
— bare to the waist. I suspect that in Handel’s day Arsace did not
tear off his shirt at this point, but what countertenor worth his salt would
resist the hint? No matter: Rosmira, her bluff called, admits she’s not a
man. Partenope takes the other countertenor, shy Armindo. They have a duet,
lifted from another Handel opera (by Handel, actually).

Partenope is a silly piece despite its Handelian glories. If you
have the singers to put it over it can be a delight, but it has its longueurs,
and for those less than addicted to Handelian vocalism — for those who
crave, for instance, two or three voices singing at once now and then in the
course of an opera — three acts can exhaust the appetite well before that
splendid duet. The duet is worth waiting for, but I know I’m not the only
person who wishes one or two of the earlier numbers might have been omitted and
perhaps the last two acts compressed into one. But these are forbidden
thoughts, notions of our medieval Victorian forebears — the kind who
trammeled that notorious Giulio Cesare back in the sixties — and
they will find little favor among opera producers today. 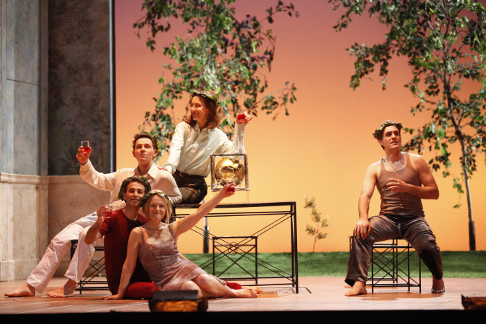 Francesco Negrin’s production, played in modern dress (color coded:
blue for Arsace, changeable as water; red for Armindo’s repressed
passions; green for the huntress Rosmira) against John Conklin backdrops that
sometimes comment symbolically on the emotional content of the aria being sung,
is chic and contemporary without forfeiting elegance or the courtly mood of the
work being staged. Andrew Chown restaged it a bit since I saw it last (at Lyric
Opera of Chicago), and has suited the actions of his cast to the physiques of
the performers at hand — which is admirable.

All the singers sang with style, acted with brio, ornamented with taste in
what is currently recognized as the proper baroque style — though none of
them were flawless and, which may or may not have weight with opera-goers, the
men were perhaps less tasty than other casts one has seen in this production.
Welsh countertenor Iestyn Davies possessed the most beautiful voice of the
night, an opulent, sensuous alto that easily filled the house, calling to mind
both David Daniels and Bejun Mehta in its quality, ardor, intensity of
emotional focus and mastery of fioritura — though for ornament, the great
“Furibondo” aria that closes Act II still belongs to Mr. Daniels. A
local boy making his debut, Anthony Roth Costanzo cut rather a skinny figure in
the red costume in which Mr. Mehta made his celebrated debut. Though
Costanzo’s instrument thins out on top and in recitative, he acquitted
himself very well, especially in the rapturous duet with Cyndia Sieden that
concluded the evening, to which both contributed the proper vocal delirium:
Those of us who had waited all night wanted a rich dessert, and that’s
what they gave us. Sieden, after a shaky start in the title role, got the
measure of the hall and ascended her proper throne. Stephanie Houtzeel, the
tallest member of the cast and one with a sizable, bigger-than-baroque mezzo,
had little trouble pretending to be a man — once she had donned a false
mustache that made her far more credible than other singers one has heard in
this role. Nicholas Coppolo has a pleasant, agile tenor, if lacking the tragic
sense that can give this defeated warrior some much needed dimension. Daniel
Mobbs was effective as Ormonte — who often “walks on” without
singing in this staging, in order to give this small character some presence in
the wider drama. 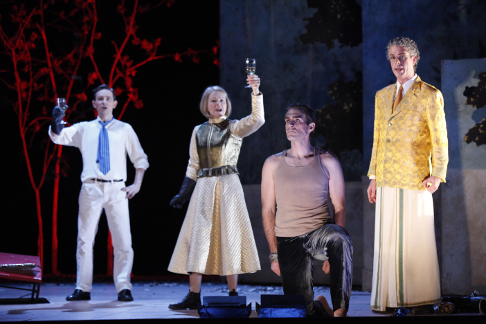 Christian Curnyn, making his debut with a cut-down baroque-sized orchestra
in the pit, proved a splendid Handelian, dancing at one moment, tugging
heartstrings at the next, and supporting the vocal flights of fancy of his
singers at all times. He joins the ever-growing list of baroque specialists who
are also great men of the theater.

I had hoped that the City Opera, under its new management team, would not
forget its Handelian triumphs and would resume this beloved series. Clearly
they still know how to cast them, and the only reasonable response is: More,
please.