The cannons don’t get to shoot the Frenchies, Vere cannot resolve his
conflicts, but inarticulate Billy overcomes huge obstacles and gets things
done. He pays the price for inadvertently killing Claggart, but no-one
intervenes. Captain Vere’s paralyzed by conscience, trapped in the fogs of
scruple. Billy, though, is instinctive, physical, direct. Imbrailo lives the
part in his body. No makeup can turn his face red so quickly, no costume can
create the tense, twisted coil of his frame.

Imbrailo’s Billy is musically astute, as stammer is integral to Britten’s
music. The mutiny, in Billy Budd, is in the music. So echoes of
Billy’s stammer burst out in recurrent staccato in the orchestra, disruptive
protests against the rigidity of naval life. The sailors don’t mutiny, but
Billy’s stammer comes to affect the rhythms in other voices, even Claggart’s.
Like Billy, Britten expresses himself in abstract sound, rather than relying on
words alone. Orchestration as protagonist. In Billy Budd, Britten shows why he
didn’t need to write symphonies. 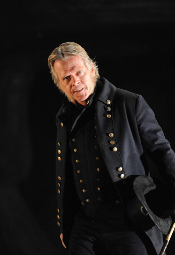 Significantly, in this new production directed by Michael Grandage, what
stands out most in Billy’s star aria, “Through the port comes moonshine astray” isn’t the usual lyrical magic but the phrase “I’m strong, and I know it, and
I’ll stay strong!” Imbrailo’s “Beauty” isn’t a passive “Baby” but an assertive
force of life.

Yet central to the whole opera is Captain Vere’s dilemma. He’s spent a
lifetime trying to understand what Billy meant. What is “the love that passes
understanding”? In this production, Vere recedes almost into the background. No
“Starry Vere” here, fixed on a more rarefied intellectual plane, thinking of
Scylla and Charybdis.Vere is tormented because he is a man who thinks.

Instead, this Vere is one of the boys. He doesn’t even wear a hat when he’s with the other officers. In the scene where Billy is hanged, he’s seen as an
old man in a dressing gown, as still as a statue among the teeming crowd of
sailors. Grandage is making a valid point, but this neuters Vere’s position. In
this scene, Vere is still Captain, still capable of action, hamstrung as he is
by his quandary. John Mark Ainsley sings beautifully, as he always does, but
this production doesn’t make full use of his potential.

If Vere’s pivotal role is underplayed, Claggart, in this production, is
developed unusually well. Philip Ens makes Claggart twitch with sexual tension.
Like the mists that trap the ship, and the haze that shrouds the stage, this
Claggart oozes poison so pervasive that just hearing Ens makes one feel unclean
— he’s a great actor, and his voice twists and elides in a sinister way. How
did this Claggart come to be who he is? This portrait of warped sexuality is
almost too awful to contemplate.

This is an extremely dark production, in all ways. Definitely not a cheery
sailor story! Christopher Oram’s set is claustrophobic. We’re inside the
bowels of the ship, not on deck, and certainly not in the foretop, where Billy
feels free. You can almost smell the fetid air, and feel the cramped, damp
chaos. Psychologically, this is astute, but becomes oppressive in itself. 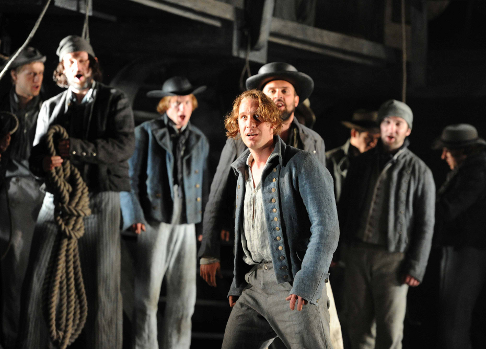 The transfer scene, where Billy sings “Farewell to the Rights of Man” might
have sounded more poignant if we’d “seen” the bright hope of the other ship in
some way. Later, soldiers in brilliant red and white uniforms appear. They’re a
delight to the eyes, but distract from the grimness of what’s happening. The
real brightness in this opera is Billy, and his transfiguration. The set is
also not flexible, despite intelligent use of lighting (Paule Constable), and
works less well after the First Act. Also, the protracted tying of the noose
within sight of the condemned man seemed excessive. The music at this point is
so amazing, that we should be listening, not watching.

This was Mark Elder’s first Billy Budd. He conducted the London
Philharmonic Orchestra so the strong undercurrents of Britten’s music flowed
well. In a production as dark as this, though, more sharpness of attack would
have captured the edginess in the music, but Elder understood the recurrent
“stammers” well. Dulled, pounding thrusts, as instinctive and direct as Billy’s
stutter.

“Rum, sodomy and the lash” don’t really fit in with Glyndebourne’s elegant,
summertime ambiance, so it is no surprise that it’s taken 60 years to become
part of the Festival. But it’s a measure of Glyndebourne’s artistic integrity
that this particularly brutal production is done at all. This Billy
Budd will be revived many times. The theatre at Glyndebourne is small, but
the Festival reaches out all over the world, to a much bigger audience through
broadcasts and DVD releases. Relatively few may attend in person, but the
potential is huge, for Glyndebourne’s artistic standards are extremely high.

Hopefully, if they film this Billy Budd, they’ll do it with Jacques
Imbrailo, who is so good that his star is very definitely in the ascendant.

All photos by Alastair Muir courtesy of Glyndebourne Festival