His music partook of all the outrageous avant-garde techniques that were hot in Europe in mid-century, but he never submitted to the rigid bounds of any academic school; he reserved the right to change his mind. There are composers of this period who are academic bores, lost in theory, who put one in mind of a water colorist refusing to use anything but black, white or gray. Ligeti used the full palette—he could duck into tonal harmonies and out of them with equal willfulness when the moment seemed right to him, with complete conviction of his own rightness. He would make fun of an admired technique even as he achieved its full potential. The most astonishing thing about the recent New York premier of his opera, Le Grand Macabre, by the New York Philharmonic was not the outrageous animations and puppetry that filled the stage or the merriment of the orchestra taking part but the fact that when a hand-picked cast sang this strange music, the expert voices unraveling Ligeti’s contortions were astonishingly beautiful. It was music with jokes in it, and theories in it, but also music that gave sensuous pleasure.
This is extraordinary because far too many of the composers writing opera in the mid-century never seem to have thought of using vocal beauty as part of their dramatic repertoire. Scores of “traditionalists” tend to listless arioso that singers can manage very well but that never achieves the grandeur of Gluck’s or Wagner’s declamation, in part because the melodies are seldom of interest. (The few exceptions, such as Benjamin Britten, invented their own kind of melody, knew how to suit it to voice and story, and created a body of enduring work.) Alternatively, “avant-gardists” often seem to have no understanding of the human voice at all, and having forfeited melody as a way to draw us into dramatic action or individual psychology, they have nothing to fall back upon: they oblige their singers to scream or bellow. Excitement, vengeance, passion, war, a boiling teakettle—it’s all the same murderous cacophony with the singers at the top of their range, barely to be heard over the screaming instruments.
Le Grand Macabre is vocally grateful even when it is murder to sing. Take the coloratura showpiece. Gepopo, chief of the secret police, who advises the king. It’s difficult to say what she advises—at one point she fires a gun in lieu of a high note, crying “Silence is golden!”—but her wacky soprano line is all over the place, topping the Queen of the Night, Zerbinetta and Olympia in a vocal line of self-consciously mechanical bounces and frills, all to a striking rhythmic pattern from the orchestra. (Ligeti uses rhythm as elegantly, as idiosyncratically, as traditional composers use melody.) All this, at the Philharmonic, while the soprano, Barbara Hannigan, was dancing about the stage (or in the aisles) in a robotic, highly individual manner. She dazzles, but she gives pleasure while she impresses with technique.
Or take Prince Go-Go, sovereign of Brueghelland, the rather disordered site of the fable. Go-Go is a countertenor, an unusual figure on the scene in the 1970s, common enough now. (Anthony Roth Costanzo, who made a bit of a stir in his City Opera debut in April, brought down the house as Go-Go.) He dwells in a palace besieged by etiquette – rendered by a prelude scored for doorbells – and is obliged to negotiate with rival politicians who force him to wear a monstrous crown. Happily, he retains the affection of his people (the orchestra throws stones at the Ministers), and allows his voice to appear on screen to reassure them in the crisis. 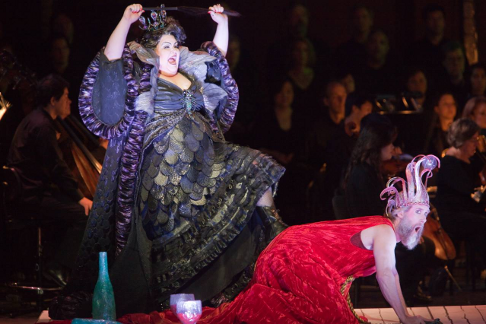 An astronomer’s mad house! Mescalina (Melissa Parks), the mistress of the house, dominates her husband, Astradamors (Wilbur Pauley), the court astronomer, who reluctantly submits to her abuse. “As Mescalina, Melissa Parks combined a firm mezzo-soprano with the high-camp mugging one would expect in the role of a sex-starved dominatrix” wrote the New York Post.
The crisis is this: The world is about to be struck by a comet. A mysterious figure, Nekrotsar (the corpse emperor?), claiming to be Death, Le Grand Macabre, the Horseman of the Apocalypse et al., arrives in the kingdom of Breughelland to tell its frivolous people of imminent catastrophe. Though they do not actually doubt him, they are rather distracted by their own problems — marital dissension, political turmoil, all that stuff, as in one of the huge, complicated paintings of Breughel or Bosch. Death can’t get no respect. Finally an everyman named Piet the Pot gets the hapless Horseman so drunk that he can’t find his horse or his scythe. He sleeps through the midnight deadline. The characters find that being dead is just like being alive — only the hapless Nekrotsar actually perishes, of chagrin at the failure of his mission. Two naked innocents proclaim the saving power of love, which the composer takes no more seriously than the sinister power of death. Life goes on. What else should it do?
For the record, Nekrotsar – who enters just before the Apocalypse, down the aisle, in a Dance of Death procession accompanied by fluttering flags and a squealing woodwind parody Death March – was sung and performed as a tragic figure, noble but unappreciated, by the very funny Eric Owens. Piet the Pot was Mark Schowalter, a Met stalwart who has never before been able to display his elegant tenor at any length. Astradamors, the henpecked royal astrologer, was sung and acted to gross perfection by Wilbur Pauley, a stalwart of the Early and Modern music scenes for nearly thirty years now (I’ve heard him sing Handel, Corigiliano, Xenakis and Meredith Monk), still limber and sonorous after all these years. Melissa Parks sang his sadistic wife. (Could these outrageous scenes actually have been performed in New York in 1977? Downtown yes, but at Lincoln Center?) Peter Tantsits and Joshua Bloom were the foul-mouthed politicians; RenÈe Tatum and Jennifer Black were the innocently naked lovers whose message of hope seemed no more serious than anything else. Whoever was in charge of casting this piece – was it Maestro Gilbert? – found a troupe ready to do anything, and ready to make it sound lovely whenever the whimsy of staging and story made eyes droop. 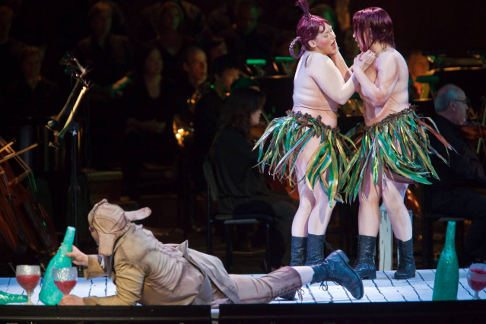 The lovers. After ogling Amanda (Jennifer Black, left) and Amando (RenÈe Tatum), Piet returns to his wine, and the couple searches for a quiet place to enjoy each other. “Ligeti gives [the lovers] melismatic intertwining melodies against the astringent harmonies of the orchestra, which this pair sang beautifully,” wrote The New York Times.
For this nonsensical story with its Lewis Carroll-worthy characters, Ligeti created a score every bit as foolish in a sumptuous style, as if sending up the pretensions of grand opera and of every great musical Requiem — which is just what he was doing. One prelude is composed for car horns; another for doorbells. The astrologer’s sadistic wife whips him mercilessly throughout their duet on the joys of married life. Piet, the astrologer and Death sing a drinking song that really sounds drunk.
A group called Giants Are Small created the animations and projections, usually right on stage, before our very eyes – permitting Mr. Owens and Mr. Costanzo to insert their heads in the midst of dioramas that were then projected above the stage to comic effect. The orchestra made thrilling and often lovely things out of a score that seldom lingered long enough in any one place to bore. It was a night at the Philharmonic like no other – except the other two performances and the dress rehearsal. A whole raft of introductions and alluring come-ons surrounded this manifestation; plainly the orchestra understands the use of modern media to entice as well as to entertain.
Has there been any serious, multidisciplinary examination of the effect of the Third World War on the arts? 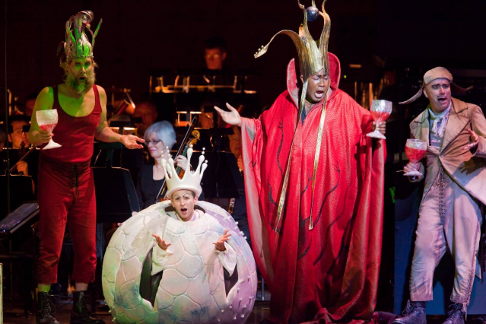 A toast to the end of the world. With Astradamors, Go-Go, and Piet at his side, Nekrotzar falls under the influence of an all-too-earthy pastime of Breughelland’s citizenry — wine, which causes him to lose track of time and the upcoming stroke of midnight, the deadline for the world’s end.
What Third World War? you reply. You remember—the nuclear one that destroyed (or at least undermined) all life on earth. It never actually occurred (so far as I know), but for many years everyone half-expected it. Great heaping piles of useless weaponry were stocked by both sides, and many a film (Dr. Strangelove, On the Beach, A Boy and His Dog), novel (Alas Babylon, A Canticle for Leibowitz, Cat’s Cradle) and folk song (“We Will All Go Together When We Go,” “The End of the World As We Know It”) loomed large in our culture. This pervasive sense of doom, I suspect, gave rise to Gyˆrgy Ligeti’s only opera, composed between 1974 and 1977 and revised in 1996.
Doom is predicted hourly. It is proper to have a musical expression of it. The world may end in bangs or whimpers, but Ligeti’s “It will end and not end, and no one will be surprised,” makes more sense than either one.
John Yohalem