This revival, at the Linbury Studio Theatre at the Royal Opera House, London, confirmed its place as a cornerstone of modern British repertoire.
It’s very loosely based on the fairy tale of the Pied Piper of Hamelin, where a conformist community rat on the piper who rids them of vermin. So he takes their children into a “little hill”. The one act opera is disturbing because it treats the story as nightmare.
Into the Little Hill operates on many different levels at once. There’s a political element.The mob violently demand the extermination of all rats, and the Minister sells his principles for votes. There’s a suggestion that the rats aren’t rats but other humans. As the Child says, they wear clothes and carry suitcases — an echo of the Holocaust? There’s social commentary, and the spectre of child abduction, all the more disturbing as the father is implicated.
Nightmares are powerful because they reveal themselves through portents, subliminally working on the subconscious. This is a work that defies classification. Quite likely Benjamin and his librettist Martin Crimp can’t explain its full portent, because it operates on the unconscious, on a subliminal level which cold logic cannot reach. That’s why it’s endlessly intriguing. Perhaps the way to get into Into the Little Hill is to let your intuition lead you.
The Minister’s Child appears to her mother in a chink of light.”Come home” says the mother. No, says the child, “Our home is under the earth. With the angel under the earth” What can that mean, no-one knows. But as the child says “The deeper we burrow, the brighter his music burns”. “Can’t you see?” cries the child. The child sees, because it doesn’t carry the millstone of received wisdom.
Into the Little Hill operates like a half-remembered dream, flotsam flowing out of the unconscious, to be processed in the listeners mind. Rats invade the town, eating grain and concrete, destroying the foundations of social order, Later, the children disappear into the bowels of the earth. “We’re burrowing” sings the child, “streams of hot metal, ribbons of magnesium, particles of light”.
A “man with no eyes, no nose, no ears” materializes in the Minister’s little daughter’s bedroom. He invades the sanctuary, mysteriously, disturbingly.. He is powerful because he can breach all defences, even the Minister’s office. “With music I can reach right in /march slaves to the factory/ or patiently unravel the clouds” Sinister as he is, he’s morally neutral — “The choice is yours” he says to the Minister.
The whole opera pivots on ideas of dissimulation, concealment, crawling into dark recesses. Nothing is safe. So the music here is cloaked in disguise. You hear something eerie, or harps or bells. Sure enough, there’s a cimbalom right in the heart of the orchestra. You hear something tense, tinny and shrill: it’s a banjo, and conventional strings being played like banjos, strings plucked high up the shaft, not bowed. Much emphasis on low-toned instruments like bass flute and bass clarinet, whose sensuous, seductive themes weave through the piece like a narcotic night-blooming flower.
Susan Bickley and Claire Booth sing. The parts aren’t defined, as such. Their voices interchange, with each other and with the “voices” in the orchestra, adding to the unsettling, dream-like effect. Bickley and Booth are the foremost interpreters of modern music in this country. They are superb. Good as the recording on Nimbus is, the singers there don’t come close to Bickley and Booth, who have lived this piece for some time. If Bickley, Booth and the London Sinfonietta record this, their version will be the one to get.
Their expertise matters, because this singing has to be approached with an almost intuitive understanding of how the vocal parts interact with the music. Both are attuned to the inner logic of the piece, so the ever-changing balance flows seamlessly. Although the text is conversational, the syntax is surreal. At several points, Booth has to “sing” at such a high pitch she’s almost inaudible. It takes physical effort. She braces herself, so as not to strain her voice beyond the limits. Humans might not hear such pitches, but rats can.
The staging, by The Opera Group, (director, John Fulljames), fits the music and the semi-narrative. The Man with no Face operates through music : the London Sinfonietta play on stage, behind a gauze curtain, vaguely visible behind the action, very much part of the concept as the orchestra is so important in this opera. The stage is dominated by a huge circular frame. “I can make rats drop from the rim of the world” says the man with no eyes. “But the world, says the minister, is round”. “The world — says the man — is the shape my music makes it.” 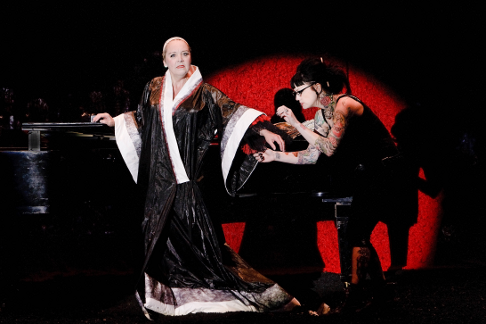 Susan Bickley [Photo by Robert Workman]
The floor is scattered with black, soft objects. When I attended the performance at Aldeburgh in June, I was close enough to touch and smell the acrid stench of rubber. It’s a striking extra dimension. By the time the production reached London the smell was almost gone. It was less oppressive, but gone too was the extra element of menace. Like music, smell can’t be seen but it operates on the mind.
Into the Little Hill was preceded by Luciano Berio’s Recital 1, It’s a tour de force, testing a singer’s full range. It’s a stream of consciousness monologue. Susan Bickley was magnificent, singing for nearly 45 minutes. Snatches of Lieder and Opera rise to the surface, receding as her mind moves on to other things. It’s tragic, for the singer is desolate, looking back on a lifetime of loneliness.
Since Berio wrote it for Cathy Berberian long after their marriage ended, it’s bittersweet, but also strangely affectionate. The interplay between singer and orchestra reflects the interplay between composer and muse. Many in-jokes, such as when Bickley sings “A composer is socially embarrassing when he tries to speak”. But that’s the whole point, for Berio speaks through the orchestration, The piece is an elaborate puzzle-game, tightly scored with intricate key changes and modulations.
Berio plays with illusion. At one stage, members of the orchestra emerge to share space with Bickley. They start to play, but the sounds are grotesquely distorted. Then they exchange instruments. What do these musicians normally play? This was the London Sinfonietta, Britain’s best contemporary music orchestra, an ensemble of virtuosi. Berio is having a laugh, for the rest of the piece is so sophisticated that bad players would be completely lost.
Bickley leans towards the audience, trying to get them to respond to her directly. I very nearly did. Berio and Berberian would have been thrilled, for part of the concept behind this piece is the relationship between illusion and reality. “Isn’t all life there?”, declaims Bickley, with a diva-like sweep of her arms.
For more information please see the Royal Opera House site here.
Anne Ozorio
Cast:
George Benjamin: Into the Little Hill (Martin Crimp: libretto)
Susan Bickley, mezzo-soprano; Claire Booth, soprano. London Sinfonietta. Frank Ollu: conductor.
Luciano Berio: Recital 1
Susan Bickley: The Singer; John Constable: The Accompanist; Nina Kate: The Dresser. The Opera Group. John Fulljames: Director. Soutra Gilmour: Set and Costume Designer. Jon Clark: Lighting.
Linbury Studio Theatre, Royal Opera House, London. 23rd July 2010