They tend, thus, to
be simplistic and easily understood by children. They also tend to be tricky
sources for writing effective opera.

When used as the text for an opera, which sometimes can be effectively done,
as in Engelbert Humperdinck’s wonderful Hansel and Gretel, it is
the musical score that makes the work successful. All the blank spaces are
filled in and emotion is established by the music. If this does not happen
— trouble.

Trouble is what Santa Fe Opera had plenty of in mounting the
never-before-staged 1978 opera, Life is a Dream, by (now retired)
Amherst professor of music, composer Lewis Spratlan. The composer was on hand
in Santa Fe for the opera’s rehearsal period and generously conducted
symposia and gave interviews, and he let it be known that we were all in for a
treat with Life is a Dream.

In a way, we were. Visually! The set is a most ingenious array of lighted
barrier gates — think of the ‘arms’ that descend over a road
at railroad crossings. A score of such members, fitted out with incandescent
light tubes, would swing down or up from stage right and left, on visible
‘gears,’ comic strip version, providing all sorts of moods and
meanings. We were in a forest so they were tree limbs; our characters were in
danger so they could hide behind the barriers and be safe, we needed a ceiling,
so all the light-arms ascended to the top of the stage and formed a pleasing
‘ceiling’ and source of light for the action below. If we needed a
mood change, the tubes of warm light could grow cooler, or less or more
intense. It was tremendously impressive and innovative, and my hat is off to
scenic designer David Korins and lighting designer Japhy Weidman, as well as
over-all stage director Kevin Newbury, who enjoyed nothing less than a triumph
with their concept of mis-en-scËne.

The evening also benefitted from Jessica Jahn’s elegant formal
costumes of, I suppose, the era of the opera’s dramatic source, Pedro
CalderÛn de la Barca’s 16th Century play, La Vida es SueÒo
(libretto adaptation by James Maraniss). A major stage element was a curiously
Dada-esque (think Marcel Duchamps) ‘tower’ that rose from the stage
floor, all round and mechanical and metallic with strong doors that contained
the wild and dangerous son of King Basilio who had to be exiled to a forest,
kept from society, and from endangering the King. The tall tower, on occasion,
would move lower into the stage floor and become a throne, with amusing rather
faux-Land of Oz lighting, and sometimes it would disappear entirely to make
room for the King’s court. It was all great visual fun. Bravo! 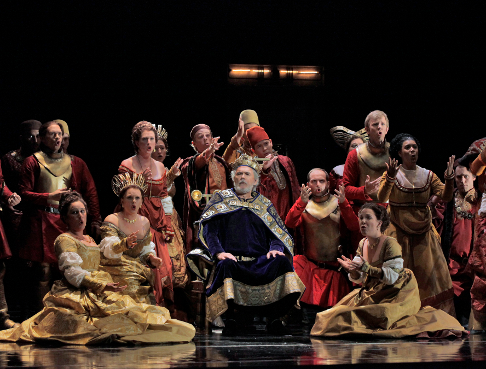 Meanwhile, back at the forest, the wild and crazy boy, Segismundo, is now a
grown up Prince, though he does not know it. But the King, old and near death,
is having second thoughts, and risks bringing the boy in from the cold to test
him out as a functioning Heir (though the ambitious Duke Astolfo aspires to the
throne). Alas, young Seggie does not pass the test, for he throws an
unsatisfactory servant off a balcony in to the sea, and engages in further
unpleasantness. Back he goes to the tower in the forest — where a few
more things happen, and whether dreaming or not dreaming, the Prince vows to
behave himself and be a good monarch, while all rejoice. Yep, a happy ending.
Interestingly enough, vocal music is abandoned for the final climactic lines of
the play/opera and the words are clearly spoken by our reformed hero, a quite
clever device for they could be heard and understood.

Now we come full circle: Spratlan’s opera did not convince me for
several reasons, quite aside from the simplistic tale whence it springs. First
among the problems is a cerebral, if sometimes witty, score that bears no lyric
material whatsoever. Virtually all vocal writing is spiky, cruelly high and low
and vehement and loud, and for Prince Segismundo, especially, it requires huge
reserves of power and range that no tenor since Lauritz Melchior could possess.
None of the singers, even in the few potentially romantic moments between the
tenor Prince and his soprano would-be girlfriends, held any emotional
warmth. 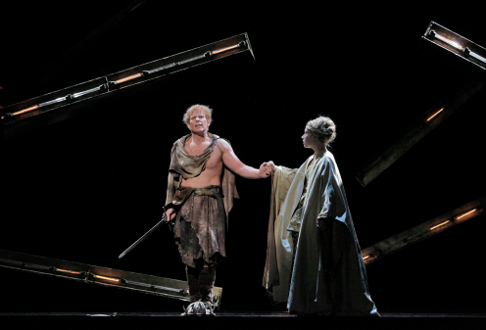 Roger Honeywell as Segismundo and Carin Gilfry as Estrella

Most people, this one included, go to the opera to be entertained and moved,
touched by emotion, which may be resolved or left unresolved, but there needs
to be a lyric line and reach of voice that conjures up human feelings, in a
compound of words and music, that make for lyric drama. Even the astringency of
a masterwork such as Alban Berg’s Wozzeck, for all its
sharp-edged atonality offers a strong core of emotion (and tonality). Mr.
Spratlin’s sometimes-tonal score is marvelous in its use of wood winds,
its musical tropes and schemes that sometimes even comment upon and illustrate
words or situations on the stage; but it offers precious little
‘singing’ music, with a dry result that fails in the end to capture
our sympathy. Now and again one can be reminded of the music for
FaÁade of William Walton, or patches of Britten or Barber operas. If
only Dream gave us a few touches of emotion as does Barber’s
Knoxville, Summer 1915, we would have something to take home. But Mr.
Spratlan has chosen to remain in the classroom instead. 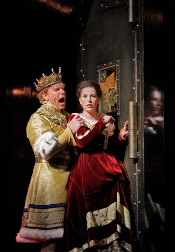 Roger Honeywell as Segismundo and Ellie Dehn as Rosaura

Let’s end on a positive note: In addition to providing a memorable
production for the world premiere run of Life is a Dream, Santa Fe
Opera assembled a remarkable and I might say brave cast that achieved miracles.
The complex music must be very difficult to learn (if the King had his eye on
conductor Leonard Slatkin at all times, who can blame him?), and it is surely
hard to sing. The cast, all of them, turned in remarkably accomplished
performances.

Tenor Roger Honeywell exceeded himself in the high-and-loud role of the
toubled Prince, and I hope his voice benefits from a lot of rest between shows,
for he is sorely taxed by the exploitative, even anti-vocal writing. James
Maddalena and Craig Verm, baritones, were effective as the Prince’s
mentor and rival, respectively, Verm displaying an unusually attractive vocal
gift. Keith Jameson as the court’s jester Clarin had to sing, juggle,
play tricks and be ever-present all evening, and he excelled, as did the
beautiful soprano of Ellie Dehn. Her music, of all, allowed a few moments of
dulcet tone, which she had in abundance. Bass John Cheek sounded old, noble and
wobbly, which was appropriate as the weakening King, while Carin Gilfrey, Darik
Knutsen, Thomas Forde and Heath Hubert were up to the demands of their
supporting roles.