For just over a month, Opera Theatre of St.
Louis turns the gardens on the campus of Webster University into a paradise for
opera-lovers, a place where musical integrity and dramatic innovation both
bloom apparently overnight.

The 2010 season opened with a production of Mozart’s Le Nozze di
Figaro which played to the company’s strengths — namely,
gifted young singers singing in the vernacular of their audience in an intimate
setting. In James Robinson’s appealing and generally well-cast staging,
the domestic dysfunction within the Almaviva estate illustrated the larger
social concern of violence between the upper and lower classes. The clever new
translation by Andrew Porter contained several genuinely funny moments and the
singers put the text across well. 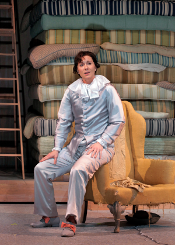 Heading the talented cast was Christopher Feigum as Figaro. Judging by his
successes in the past two seasons, Feigum was born to play this character. Not
only was his barber canny as well as caring, he also communicated the sense of
masculine competition between servant and master in both “Se vuol
ballare” and an intense stare-off with the Count leading into the wedding
procession. 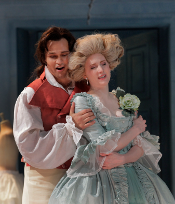 The counterpart of Figaro’s tension with the Count should be physical
chemistry with his bride-to-be. As her elegant and moving performance in the
role of Marie Antoinette in John Corigliano’s The Ghosts of
Versailles illustrated, Maria Kanyova is an extremely compelling singer
and actress. She is not, however, a born soubrette and it was disappointing to
see her in a role that did not showcase her talents as well as triumphs of
seasons past. Her Susanna seemed worried too often and acted as Figaro’s
magician’s assistant than his equal partner. Still, the final phrases of
“Deh, vieni” were enchanting and I look forward to hearing Kanyova
again.

In the roles of the Count and Countess Almaviva, Edward Parks and Amanda
Majeski were as well-suited to their respective parts as they were well-matched
as a couple. Parks imbued his Almaviva with a vanity that complemented his
violent tendencies and the moment he took to compose himself after “Hai
gi‡ vinta la causa” was perfection. As his wife, Majeski conveyed
preternatural musical maturity with her carefully molded phrases and exquisite
control over her voice. Her face was as lovely and expressive as her singing
and one could almost see the memory of young Almaviva serenading his Rosina
cross her face as she listened to Cherubino’s canzonetta. 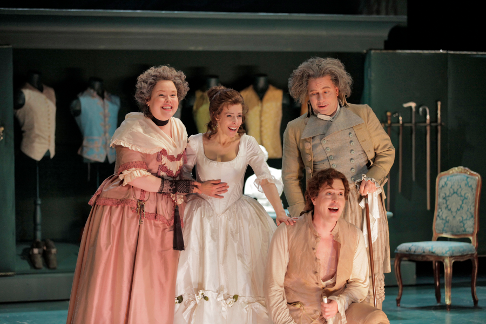 As the page, Jamie Van Eyck delivered said canzonetta with hormonally
charged urgency. Also among the excellent supporting cast were Jamie Barton,
Matthew Lau, and Matthew DiBattista. The trio took evident (and infectious)
pleasure at being onstage both individually and as a group. Bradley Smoak was
rather young for the role of Antonio, but his transformation from inept
drunkard to the persnickety Floor Manager he played in Peter Ash’s
The Golden Ticket was impressive. As his daughter, Elizabeth Zharoff
showed much promise, even if her Barbarina came across as more dull-witted than
young. John Matthew Myers delivered one of the evening’s best punchlines
as a deadpan Don Curzio.

For the first half of the opera, a large crack in the wall and floor
physically represented the discord within the household. Bruno Schwengl
provided charming sets and costumes, with the exception of a singularly ugly
garden for Act IV. Both lighting by Christopher Akerlind and choreography by
Se·n Curran were exquisite. Stephen Lord, a relatively last minute replacement
for Timothy Long, presided over members of the Saint Louis Symphony Orchestra
with his signature confidence and zest. The company’s Artistic Director
James Robinson created several moments of amusing and innovative theater
including staging during the iconic overture, a haircut given to Cherubino
during “Non pi˘ andrai,” antics with a dress form, and multiple
pairs of roving hands. The only moment that fell flat was the large tree that
literally fell to the ground during the opera’s final moments.

As Madame Larina says in David Lloyd-Jones’ translation of Eugene
Onegin, in real life there are no heroes or heroines. If that is true,
then the opera is where we go to find them. As Tatyana in Kevin Newbury’s
production of the Tchaikovsky opera for OTSL, Dina Kuznetsova performed with
the vocal and dramatic presence of a true heroine. However, when we first
encounter the character, Tatyana is a dreamy and impressionable girl. It was
difficult to hear Kuznetsova’s full, womanly voice and remember she is an
ingÈnue, especially as the mature Tatyana appeared in the opening moments of
this staging, gazing upon a portrait of her younger self from the summer she
met Onegin. This early revelation robbed the audience of the Pygmalion moment
in Act III, when Tatyana has established herself in St. Petersburg as a woman
of significant reserve and social standing.

Because the staging focused so much upon Tatyana, the role of Eugene Onegin
seemed strangely underdeveloped. Little was done to answer the perturbing
questions about Onegin’s nature and, as his primary characteristic
appeared to be moral ambivalence, it was easy to feel ambivalent about the man
himself. In the title role, Christopher Margiera’s fine singing and
strong musical presence were best utilized in moments of ensemble, such as the
gorgeous quartet in Act I. As Tatyana’s sister Olga, Lindsay Ammann was
appropriately kittenish and her fair coloring contrasted beautifully with
Kuznetsova’s dark hair. In the role of Olga’s paramour Vladimir
Lensky, Sean Panikkar sang with an ardency and tenderness that left you wishing
you were Olga (at least for the first act). His aria comprised of some of the
most musically satisfying moments of the entire season. 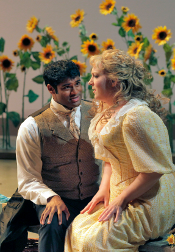 Sean Panikkar as Lensky and Lindsay Ammann as Olga

In the supporting roles of Madame Larina and Filipyevna, Gloria Parker and
Susan Shafer each performed with a winning mixture of strength and softness.
Andrew Drost’s Monsieur Triquet was a perfect complement to his turn as
Augustus Gloop in The Golden Ticket. For both roles, Drost drew on his
considerable musical finesse and physical elegance to great comic effect.
Christian Van Horn, an OTSL favorite, was a young but dignified Prince
Gremin.

As the first peasant, Jeffrey Hill led a chorus of very well-prepared,
organized, and happy peasants. In particular, the girlishness of the
women’s chorus was used effectively to underscore Tatyana’s
brooding nature. Conductor David Agler led the cast and orchestra in a
performance memorable for its musical integrity from start to finish.

The sparse wooden sets designed by Allen Moyer, although attractive, did
little to illustrate the scope of the Larin estate or to differentiate between
the provincial and St. Petersburg interiors. That said, the minimalist
horizontality provided a perfect frame for the bleak moments of Lensky’s
aria and the subsequent duel. Moreover, the transition from exterior to
interior for the party scene was a little piece of theatrical magic. Martin
Pakledinaz’s handsome costumes were enhanced by Tom Watson’s
especially naturalistic and effective hair and makeup.

To the company’s credit, it is nearly impossible to assess two of the
four festival productions without considering the other two. Each staging
complements the others and the young artists (both onstage and off) benefit
from this cross-pollination as much as the company’s devoted followers.
By the end of the season, it is hard to imagine the gardens empty and the
theater fallen silent. Then, like Brigadoon, it all is gone. Luckily for us, we
don’t have to wait 200 years for the next season of enchantment.