Above all, there is no evidence that they would
compete for queen Rodelinda, who instead was exiled to Benevento with her
little son Cunincpert and lived peacefully there until Perctarit, after finally
recovering the throne, summoned her back to the kingdom’s capital
Pavia.

Turning into melodrama characters those practical barbarians, more
interested in power than in romance or bloody vengeance, was the endeavor of
such Baroque playwrights as the French Pierre Corneille and the Florentine
Antonio Salvi. The latter’s 1710 libretto for Giacomo Antonio Perti
(Rodelinda, regina de’ Longobardi), drastically pruned by Nicola
Haym for the London stage, was set to music by Handel in 1725. It immediately
proved a resounding success, also thanks to a cast including soprano Francesca
Cuzzoni in the title role, the legendary Senesino as Bertarido, and some of the
best singers available in the side-roles: tenor Francesco Borosini, bass
Giuseppe Maria Boschi, and alto castrato Andrea Pacini. 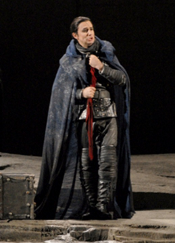 The present staging in Martina Franca, a festival traditionally claiming to
“authentic” performing practice, plunged the romanticized
18th-century music drama back into the darkest Middle Ages, or into a
“Middle Ages next-to-come”, as phrased by director Rosetta Cucchi.
At least visually, through the combination of muddy and disheveled landscapes
with costumes (by Claudia Pernigotti) featuring leather, rags, metal
decorations, and heavy-duty boots. Entertaining enough, but how much
“authentic” is questionable, if only one checks Senesino’s
portrait as Bertarido in the flamboyant livery of a Hungarian haiduk,
as painted by John Vanderbank in 1725. At the most, this is
Regietheater that dare not speak its name, a compromise likely to
dissatisfy modernists and authenticists alike.

The show’s musical side was far more convincing, with the Swiss
conductor Diego Fasolis succeeding to elicit from the festival orchestra
— equipped with modern instruments plus harpsichord, theorbo and Baroque
flute — a sound that was both luscious and historically informed. Within
an evenly balanced company, the Argentinean alto Franco Fagioli (Bertarido)
towered for projection, agility, seamless transition between registers,
unfailing musicianship. His manly color and stage charisma may set a new
standard among countertenors. As Rodelinda, mezzo Sonia Ganassi tended to
underact throughout and suffered some strain in the upper register. For her
convenience, a couple of high pitches were transposed an octave lower, and her
whole climactic aria “Ombre, piante” was set in G minor instead of
the original B minor. Nevertheless, she sang with an elegant restraint hitherto
unnoticed in her main repertoire, stretching from Rossini and Donizetti to
Massenet.

Her sister-in-fiction Eduige (the established Baroque specialist Marina De
Liso) outplayed her as to style awareness, consistently unfolding hot
temperament and fanciful coloratura. On the contrary, both the villain
Grimoaldo (Paolo Fanale) and the arch-villain Garibaldo (Gezim Myshketa) were
absolute beginners in the field of early opera, yet delivered their fast runs
and stalking utterances pretty nicely. A further pleasant surprise was the male
alto Antonio Giovannini, who lent the loyal Unulfo mellow color, tasteful
da capos and lots of acting stamina, particularly in the alternative
E-minor version of “Sono i colpi della sorte” after the Hallische
H‰ndel-Ausgabe (HHA).

To many affectionate Handelians, the opportunity to hear this and some more
passages restored to the composer’s final intentions was a novelty. Yet
the claim of a “world premiere in Andrew V. Jones’ critical
edition” is mere pressroom hype. The actual premiere with HHA material
before official publication was in Glyndebourne 1998, followed by the Gˆttingen
H‰ndel-Festspiele in 2000 and sundry houses worldwide. Anyway, the new artistic
manager in Martina Franca, Mr. Alberto Triola, can rightfully boast for
bringing to attention a dramatic masterpiece which, despite its Italian
subject, was hitherto neglected by the major opera theaters in Italy.