Under founding director John O. Crosby’s regime only two minor Britten
operas were heard over many years. Today, Santa Fe is something of a
‘Britten house’ — long over due — under the recent
directorship of Richard Gaddes and now Charles MacKay whose new production of
Albert Herring is playing through August. Word is about that Santa Fe’s
observance of Britten will continue, with more of his operas planned in seasons
ahead. Delightful news!

The time is circa 1900, Loxford, a mythic English village, with an era just
ending and a new one about to emerge. But old ways die hard, and in tiny
Loxford Victorian ‘morals’ (they were hardly that), are slow to
change. When the local autocrat Lady Billows learns there is not a virgin girl
available for Loxford’s annual May fete where she plans to give a prize
celebrating ‘purity,’ she is outraged. What has the world come to?
These country girls “think too little and see too much!” Hold on,
says Police Commissioner Budd! There is Albert Herring, 22, pure as the driven
snow, the virtuous hard working son of the widow Herring, village greengrocer.
Would Lady B. accept a King of the May this year? Harrumph! Very well, if we
must. So the plot is set in motion and we find that for Loxford, as well as
Victorian-Edwardian England, public morality will soon enough be changed. (I
must add a small criticism here: Santa Fe sets the opera in 1947, its debut
year, and a cultural disconnect results. By 1947, England had gone through two
world wars and a back-breaking depression since the time of Britten’s
tale, and pious moralizing of the Loxfordians, entirely suitable in 1900, was
out of tune after WWII. I had thought the ‘set in the time of
composition’ fad had faded, as indeed it should.) 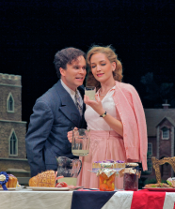 Joshua Hopkins as Sid and Kate Lindsey as Nancy

Britten’s singular music and the wonderfully singable text of
librettist Eric Crozier (adapted from a story of Guy de Maupassant), are the
basis for what may very well be the best operatic comedy since Verdi’s
Falstaff. Albert Herring is a perfect blending of a simple
story with endlessly sophisticated music that supports and elaborates every
word of the text and falls easily upon the ear. Melodies abound amidst
orchestration of much color and freshness. True, there is a bit of mocking
satire, but withal Britten’s villagers are treated gently. ‘Tis a
gift to be simple!’

[However, let me add that even today Britten’s opera is somewhat
controversial. I was at a performance of it once where an audience member had a
heart attack and died, his wife later sued the opera company for “that
awful Britten’s music” causing the problem! Several people, and not
opera neophytes, have complained after seeing Albert Herring , that it
was boring as it’s meant for “high-school or college
workshop” production. I could not disagree more! I will say that the
piece is quite ‘literary,’ and appeals most to those who especially
appreciate form and music. All is restrained and contained, but as contrasted
to the repressive formalities of early 20th C. English village life, the music
yields up an unusual expressivity, to my perception, producing as it does a
rare measure of ironic humor, musical humor as well as rhetorical, for
Haydn-like Britten is somehow always able to make a little musical joke or
unexpected commentary with a quirky change of harmony, a quote from other
sources (Tristan!) given a moment’s special treatment, the strict
formality of the Threnody, for example, shattered by the chaos of complaints
that immediately follows Albert’s final entry — these techniques
all mean something, but admittedly may appeal more to formalists than to those
who want a less obviously rhetorical approach to music — Puccini, for
example; Britten falls into the same school as Mozart and a few other good
companions.]

The show’s opening night was a victim of one of Santa Fe’s
famous monsoon rains, with horrendous storm noise virtually covering the stage
and pit. For purposes of this review I was fortunate to attend the second
performance, August 4, a perfect evening, quiet and cool with a brilliant Venus
glowing prominently, and appropriately, in the evening sky.

Mme. Brewer, long a Santa Fe favorite and something of a specialist in
Britten’s music, dominated every scene as the imperious grande dame of
Loxford. With adroit wit, understated playing and a bright soprano voice she
became Lady Billows. Her side-kick maid, Florence Pike, was nicely achieved by
contralto Jill Grove. The town leaders were capably handled by Dale Travis as
Commissioner Budd, Mark Showalter as Mayor Upfold, a fine young bass Jonathan
Michie as Vicar Mr Gedge, while the local head teacher was chirped brightly by
Celena Shafer who must have been a nervous wreck by the end of the evening as
director Curran had her in frantic motion at all times (a tad distracting).

Theirs was good ensemble acting and singing, and in several of the great
musical moments, especially the nine-part Threnody of mourning for Albert in
the opera’s penultimate scene, Davis and his forces created some
genuinely magical musical beauty. He played the Threnody in a hushed
pianissimo, then Bang! The lost and “dead” Albert suddenly pops
through a trap door and in an instant the mourned becomes the beleaguered, as
all hands castigate him for taking his prize money, skipping town and having a
helluva good drunken time, returning covered in muddy dishevelment. After all
this, Albert’s defining moment arrives, when he sings to his domineering
parent, “That’ll do, mum.” And the opera is over. 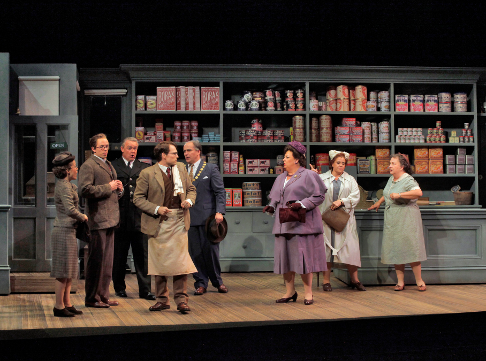 But not quite: As Mum Herring disappears through a door in her store, she
looks back, that is the wizardly Judy Christin does, at the audience and gives
the show away — she bestows upon Sid, Nancy and Albert the most wicked little
smile you have ever seen, which tells the whole story. You can imagine her
thinking, “My boy did it after all, good for him!” If there is a
better comic actor in all of opera than Judy Christen, whom I first heard sing
Mrs. Herring 32-years ago at the St. Louis opera, I don’t know who it
would be.

The brief story of a repressed lad who has escaped Mum, the oppressive town
and the fury of Lady Billows thus ended on a note of high amusement before a
delighted audience. This show is too good to quit; I hope it plays at other
venues and ultimately returns for another season. It is that good.