Best known for its regular Ring cycle, the Seattle
Opera presents other Wagner operas in the off years. The high quality of this
summer’s performance of Tristan
und Isolde is a tribute to the company’s seriousness of purpose.
While perhaps not quite a match for its legendary 1998 Tristan, in
which Jane Eaglen and Ben Heppner debuted in the title roles, it nonetheless
presents as strong a cast as one is likely to encounter anywhere today.

Clifton Forbis is that rarest
of singers: a genuine dramatic Heldentenor whose clarion top rests on
a dark baritonal base. If his voice seems a bit less supple than in his
impressive 2005 Geneva performance (available on DVD),
it is now more solidly grounded. On August 4, despite lingering indisposition,
he displayed hardly a single moment of technical insecurity. While somewhat
restrained in Act I, perhaps by design, he trumpeted the Act III high notes
with apparent ease—as if, in the Birgit Nilsson tradition, he could sing
it all over again. (The performance was shorn of the Act II “Tag und Nacht” segment, a standard Seattle cut, but Act III was performed complete—more than many Tristans sing.) Throughout
there were moments of genuine musical and dramatic insight. While those with a
historical perspective might quibble, calling here and there for clearer
diction, subtler phrasing, gentler pianos, warmer timbre, or deeper
psychological insight—who today sings a finer Tristan? 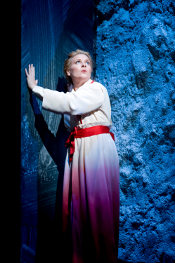 Much anticipation surrounded the American debut of Annalena
Persson. The young Swedish soprano sang the role of Isolde to acclaim at
the Welsh National Opera in 2006, where Seattle impresario Speight Jenkins
signed her up. (The local press hints that she is slated as Seattle’s
2013 Br¸nnhilde as well.) Young, blonde, comely and, by Wagnerian standards,
slim, Persson looks the part. Her silvery voice has edge and brilliance that
can project, despite some lack of warmth and heft, through a Wagnerian
orchestra. At times she is a thrilling interpreter, particularly at moments of
anger and excitement, such as the Act I Narration and Curse—especially
where the orchestration is light. But the role of Isolde overstretches her
vocal resources. On sustained (particularly rising) tones in the upper middle
part of the voice, the voice weakens and the vibrato widens dangerously. The
“Liebestod,” almost entirely comprised of such passages sung
against full orchestra, was thus anti-climactic.

The secondary roles were all taken by Seattle favorites, to great effect. Stephen Milling
nearly stole the show with a moving Kˆnig Marke. His rich bass effortlessly
filled the hall, and his German diction was exemplary. Margaret Jane Wray is gaining
attention these days, consistently singing major roles at the Met. To judge
from her Brang‰ne here, the spreading fame is well-deserved. Hers is a soprano
approach to this Zwischenfach role, slightly steely at the top, but clearly
projected and delivered, with plenty of volume. Greer Grimsley,
Seattle’s resident Wotan, made a more convincing Kurwenal for being
understated and elegant wherever possible. Jason Collins plays a forceful
Melot, Simeon Esper a sweet Shepherd/Sailor, and Barry Johnson a fine
Steersman. 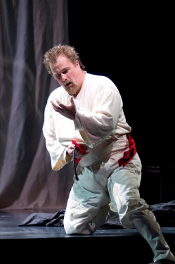 Seattle’s Principal Guest Conductor Asher Fisch is not
one to pepper this score with excessive accelerandos, overweighty accents, or
bloated brass. He strives instead for a consistent mood of classical restraint,
brilliantly achieved through smooth line, subtle detail, smooth blend, and
transparent textures. (Connoisseurs might note also the innovative use of open
strings and Wagner’s specified Holztrompete
in Act III.) The orchestra, once past some botched entrances in the prelude,
played splendidly.

Stage director Peter
Kazaras conceives Acts II and III as Tristan and Isolde’s final
hallucination. That is, the potion is indeed the death potion Isolde ordered,
and from then on we share the images that pass through the lovers’ minds
in the moments before they expire. The inspiration is Ambrose Bierce’s
famous short story, “An Occurrence at Owl Creek Bridge.” This
concept offers many potential insights into text and score. It promises to link
the opera’s two central concepts, love and death, in a unique way,
underscores Tristan and Isolde’s uncanny separation from all that goes on
around them, with everything important taking place within their minds, and
highlights the opera’s uniquely distorted sense of time. 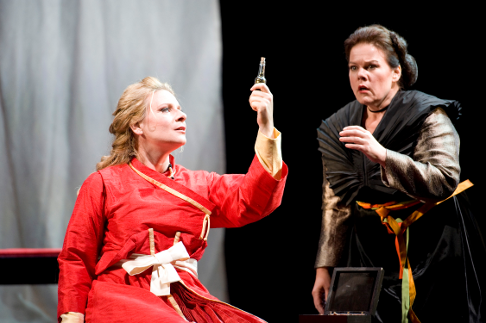 Annalena Persson as Isolde and Margaret Jane Wray as Brang‰ne

Ultimately the production fails to fully engage this demanding concept,
though the stage direction, set design, and costumes (the latter two being the
work of Robert
Israel) display numerous virtues. On the positive side, a semi-transparent
curtain draws the viewer gently into the dream world of each act, as if falling
asleep (in the best possible sense!). The gloomy semi-abstract unit set, with a
window at the back into reality, is visually neutral but acoustically
resonant—a virtue too often neglected these days. The blocking of Act II,
in which Tristan and Isolde slowly follow one another across a dark stage, like
Orpheus and Eurydice, evokes their ghostly state between worlds. Similarly
consistent with the concept, Kurwenal is never killed but simply recedes from
Tristan’s consciousness. Tristan and Isolde’s costumes shift from
mortal red to half-red, and finally to pure transfigured white, as if the blood
is slowly draining from them. The extensive use of computer-aided lighting
effects, a Seattle innovation with this production, is evocative. Tristan sings
his first lines in Act II while apparently fully encased in a large slab of
solid stone—a striking effect in itself, but also one that highlights
that Isolde is summoning him only in her mind. (It would be even more effective
if maintained for more than a few lines.) Other coups de thÈ‚tre
include a glittering shower for the potion, and a giant, glowing holographic
candle for the Act II light.

Yet much else is a jumble, undermining the production’s core concept.
Semi-realistic elements—large wrapped paintings, a tree, furniture, and
the little model ship (mandatory, it seems, in contemporary Tristan
productions)—coexist uneasily with abstract ones, such as laser-like red
cords and a “stage within a stage” curtain behind which characters
intermittently disappeared. This is hallucinatory, perhaps, but incoherent. The
blocking at the end of Act I, and throughout Act II, tells us less than it
might about the subjective experience of passing from day into night: It is not
clear, for example, why the “dying” Tristan and Isolde are
separated at the start of Act II, then again reunited. Nor does the costuming
and comportment of secondary characters clearly delineate their status from the
subjective perspective of the dying couple: One would expect a more fundamental
change in how they are perceived after the Tristan and Isolde imbibe poison. In
the end, too much of the production is static, even blandly realistic, in a
classic stand-and-sing manner.

In the intermissions and on line, one encounters considerable criticism of
this production for being too radical. I believe it is, on balance, too
conservative. Readers of my recent
commentary on the Stuttgart Ring know I can be critical of the
excesses of Wagnerian Regietheater. Yet this production of
Tristan might profitably have been more radical and rigorously
intellectual—more konsequent, a German critic might well have
said. The production is insightful as it stands, but a future revival might
give Kazaras a second chance to realize its promising central idea more
starkly.

All photos by Rozarii Lynch courtesy of Seattle Opera