Isabella
Bywater beautifully realises Miller’s clever visual concept, presenting
us with an exquisite reproduction of an eighteenth-century doll’s house,
the faÁade of which is drawn back to reveal a realistic and immensely detailed
interior — the connecting corridors, doors and stairwells are perfect for
upstairs-downstairs intrigues and affairs. Bywater is alert to every minor
detail, the only anachronism being the arrival of boxes from Versace, Prada,
Escada and La Perla after Norina’s extravagant post-marriage spending
spree. Costumes are similarly precise and elaborate, the characters dressed as
elaborate mannequins, with whitened faces, and gowns and cloaks of gharish
reds, purples and pinks.

Beyond its visual appeal, this set has one clear advantage: it can be seen
clearly from all corners and heights of the auditorium — not something
that could be boasted off all recent ROH productions. However, enclosing the
action in a succession of tiny chambers, three-storeys high, does produce a
rather ‘distanced’ result, and at times the singers, trapped in
their cubicles, struggled to project over the orchestral fabric and to
communicate directly with the audience. It is thus quite a relief when, in the
closing moments, the protagonists venture into the garden; as the door of the
doll’s house is closed, a reassuring air of reality is intimately; these
are real characters after all, not puppets, although the artificial world is
still visible through a narrow chink, and the genuinely tragic and comic
sentiments of this human drama are never fully evoked. 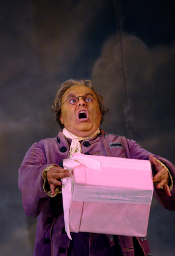 As the eponymous old ogler, duped by his avaricious nephew, Paolo Gavanelli
huffed and puffed, stamped and pounded, frustrated and exasperated almost to
the point of self-combustion. While he hammed up the gags, Gavanelli’s
baritone is a little heavy and his portrayal would have benefitted from some
light buffo esprit — and from crisper diction. His patter-duet
with Dr Malatesta, sung by Jacques Imbrailo, is the high point of the comedy,
but it did not produce quite the excitement that it should, and was the wrong
sort of ‘breathless’.

Imbrailo was a confident, wry Malatesta — a Dulcimara with style.
Among the two-dimensional stereotypes, he conveyed a naturalism and
credibility, sang with clear diction, and balanced lyricism with dramatic
singing. A recent graduate of the Jette Parker Young Artist scheme, he’s
one to watch.

Barry Banks, as Ernesto, was reportedly afflicted with an allergic reaction;
his high, ringing tenor was a little unyielding at times, but, while he did not
attain a truly Italianate bel canto lyricism, his voice has a
freshness and focus which added vigour to a foppish role.

Making her house debut, Õride MartÌnez initially appeared somewhat nervous.
This Norina was rather shrill and uncomfortable, but MartÌnez relaxed as the
evening progressed and had no difficulty spanning the vocal compass of the
role, or dispatching the coloratura demands of the final act. She revealed a
sure sense of comic timing and gradually began to enjoy herself, metamorphosing
from sweet young bride to scathing harridan. 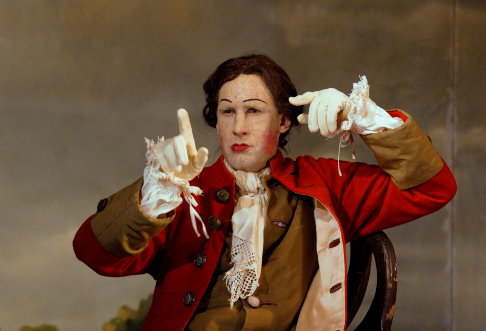 The chorus have little to do musically until Act 3, but they kept themselves
busy, dusting, cooking, gossiping…at times all this activity was a
little distracting. When they did get the opportunity to sing, however, they
produced an exciting, invigorated ensemble sound.

Perhaps sensing that the cast were rather constricted by the staging,
Evelino PidÚ injected some movement and fizz in the pit; tempi were pacy,
textures were clear — there was some exquisite woodwind playing —
and the accompanying patterns were energetic and light-footed.

Overall, the performances were solid but for this listener the parts did not
add up to a totally convincing whole. Most unsettling of all, in this
production the values articulated by this fairly straightforward farce were not
absolutely clear – who are the ‘baddies’? We may pity our
‘hero’, Ernesto, as a lover deprived of his heart’s desire;
but his campness is less appealing and his covetousness less admirable. Norina
is an amusing minx but the slap she delivers to her long-suffering husband,
sits uncomfortably among the frivolities and artifice, and dilutes our
sympathy. Don Pasquale is a pitiful dupe, but also a dissipated old lecher.
Even the calculating Malatesta is an ambiguous ‘villain’: his
intentions are, after all, beneficent, and his manipulative scheming does have
a happy outcome.

One can’t help feeling that things should either be more frothy or
more revelatory. As it is, it’s hard to care about these marionettes in
their artificial bubble.

All photos by Catherine Ashmore courtesy of the Royal Opera