It is impossible to watch certain scenes of this
Das Rheingold without having one’s heart in one’s mouth,
and that owes nothing to the vocalism (on the whole pretty good), much less the
orchestral playing (a familiar quantity). This set is complicated and
dangerous, and no matter how precisely they set the computer programs and check
the body harnesses—something will go wrong someday.

And you know? If the music-making continues on this level, and the portrayal
of Wagner’s story does too, it will be worth it. Death comes to all; it
might as well be a glorious death in full view of a paying audience, just like
Ancient Rome in pagan fantasy. At least so long as no major singer is concussed
in the accident, it will be worth it. The shenanigans involve plenty of
stunt-doubles, and admirable as their work is, this is music-drama: Prosaic
throats are expendable. 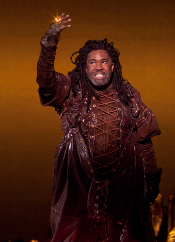 These were my first thoughts at the Met’s new Das Rheingold
last Thursday, in those rare moments when I could catch my breath to think of
other things. Lepage’s staging is busy—things are happening every
moment, in the mobile sets and intricate lights when not among the characters.
The singers, too, are obliged to hurl themselves about, emoting, slithering,
doing magic tricks. The fierce heat of these unpleasant people (who are not
people at all, but archetypal figures) makes itself felt, as if this were some
through-composed Clifford Odets drama of too many generations cramped in some
New York apartment, snarling and grudging and hacking at each other. Perhaps
the family will calm down when they move into their grand new digs. That seems
to be the plot.

The stars of Lepage’s show are a row of aluminum planks that, aided by
wildly creative lighting, portray a flat floor, a rippling river, a cavernous
ceiling, a raked rampart, a vertical redoubt, a staircase through the sky. This
is the most versatile floor since Jackson Pollock tripped over a few cans of
paint and hung the result on his gallery wall. It could probably sing
creditably. (Alas, it does squeak at times. Pay no attention—pretend
it’s somebody’s cell phone.)

Stunt doubles are used to create many of the effects, and this is obvious if
you think about it: First of all, no singer could slide down the steep rake of
the stage in a credible imitation of body-surfing the air stream, and then pop
up singing as Freia, Froh and Donner do in scene 2. Then, at the end of scene
4, we find ourselves (in the audience) apparently suspended in mid-air
over the rainbow bridge, a rippling multi-spectrum light-show, up
which the gods (but it’s their doubles; as the Fricka is only about
one-third as broad as Stephanie Blythe) march slowly, held by guy wires from
above. Got that? We are perpendicular to the stage action, which defies
gravity. And when the gods have at last ascended (or crossed the bridge) to
Valhalla, the “bridge” is raised like a drawbridge to become the
gate in the stone wall of the fortress of the gods. It is the most exciting
version of this climactic event that I’ve seen on any stage other than
mind’s eye. 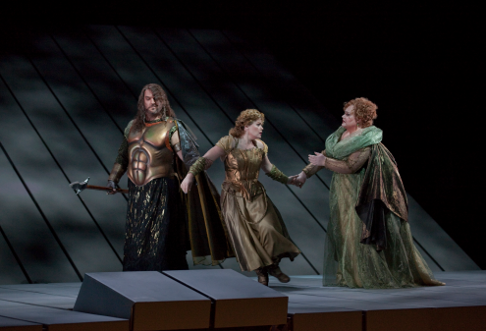 This finale makes up for several things that do not work: the
ransom of Freia (here a hammock in which she is far from concealed by a bunch
of golden bric-a-brac), the offhand murder of Fasolt, the awkward upside-down
shenanigans of the aerial Rhinemaidens. In contrast, the Dragon and the Frog
are quite fine, Wotan and Loge’s stroll across the sky to Nibelheim is
heart-in-the-throat stuff, and the apparition of Erda is effective. I found it
the most successful new production to grace the Met during the tenure of Peter
Gelb, and am eager to behold the rest of Lepage’s Ring. 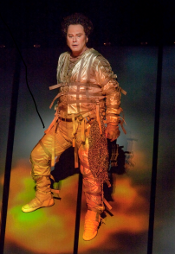 But a problem with this dizzying staging—for this Wagnerian—is
that the technological wizardry has gone to the director’s head. He shows
a predilection for “MTV” opera direction—for new events at
each new chord, every syllable, every new motif. We cannot relax into
Wagner’s stately rhythms; there is too much action. This is opera as
five-minute video or even a videogame (which seems to be the inspiration for
the superhero-styled costumes). After five minutes of it, one feels energized.
After an hour or two, the eyes are glazed, the attention worn thin. Can’t
we just listen to them sing for a while?

The singing for this Rheingold was of an impressive caliber. True,
nearly all of it is performed from the stage apron, and is therefore likelier
to fill the house than the same voices would do from deeper within the
proscenium. But there’s no place for singers in the proscenium, because
Lepage’s planks are floating in mid-air or something. The vocal standouts
on Opening Night, as heard on the radio, were Stephanie Blythe’s
authoritative Fricka and Richard Croft’s sensuous Loge.

In the house on the second night, though both singers produced sound
superbly, and Croft won an ovation for his ability to sing much of his part
while walking backwards up walls, both forfeited a degree of intimacy in the
enormous space. Blythe has Fricka’s changeable moods down, from kittenish
hypocrite to vigorous shrew and for my money she has owned the part since she
first sang it in Seattle; I am eager to see how she develops in it. But Croft,
better known for his superb Handel performances and the golden Gandhi he sang
in Satyagraha, though he brought astonishing power to this essay in
Wagnerism, sang this most ironic and human of Rheingold’s roles
with an unvaried and uninteresting solidity. Where were those subtle shadings
of double-meaning that we heard on the radio? Perhaps walking backwards up
walls undermined the singer’s focus on vocal acting. 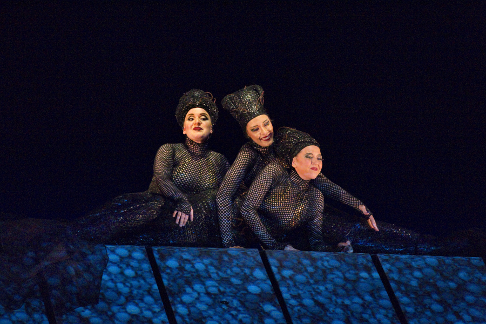 Lisette Oropesa, Jennifer Johnson and Tamara Mumford as the Rhinemaidens

Bryn Terfel’s Wotan has been fondly anticipated and he looked good,
piggy heroic, but I found him vocally underpowered. I missed the regal ease and
bel canto polish of James Morris’s king of the gods, but this was a
well-acted, carefully devised performance. Wotan may simply be too much for
Terfel: In the final scenes, his throat dried and pitch failed him. He may
figure out how to last through an entire Rheingold, but his showing
made one fear for his Walk¸re.

A pleasant surprise was the Freia of Wendy Bryn Harmer, new to me, whose
bright, clear, metallic soprano expressed the character’s hysteria
without ever becoming shrill: a Brunnhilde-in-waiting, I’d say, and not
bad looking in a short skirt either. Too, the staging calls for Freia to hop up
on walls and race up and down hills, which she handled with aplomb. Patricia
Bardon made agreeable sounds as Erda if not quite plumbing the primordial
depths. I liked Tamara Mumford’s healthy vibrato as Flosshilde, but
otherwise the Rhinemaidens sounded undistinguished, a fact one might not notice
while they swing over vertiginous parapets in constricting costumes.

Eric Owens, who sang the destructive Nekrotzar in Le Grand Macabre
last June, showed signs of frustration as yet another nefarious plot to conquer
the world met comeuppance. Indeed, one has seldom seen so unpleasant an
Alberich in Nibelheim, rather justifying the gods’ ill-treatment of him.
Vocally, he was gruffly exciting—a smooth Alberich would be
inappropriate—and the wild demands of the staging did not, in this case,
undermine vocal acting: his curses were chilling; one felt the
misanthrope’s internalized hatred of the persecuting world and his
persecuting self. Indeed, I overheard those who would have liked to have him
singing Wotan and Terfel Alberich, but I’m not sure the timbres quite
overlap. 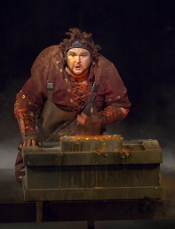 Gerhard Siegel made a winning, whining Mime, Franz-Josef Selig a
distinguished Fasolt and Hans-Peter Kˆnig a thrilling Fafnir, making one eager
to hear him as Kˆnig Marke and Gurnemanz in the not-too-distant future. Adam
Diegel and Dwayne Croft sang Froh and Donner honorably, but Croft needs to time
that hammer blow with more precision.

James Levine’s return to health put him in charge of the orchestra,
and though the prevailing tempi were on the slow side and there were moments of
bombast that could have done with a subtler touch—as I grow older I find
myself preferring a cleaner, brisker sort of Wagner—this was the
well-known Levine style with no falling-off, and the Met audience lapped it up.
Gaunter and grayer than before, he is still beloved, not least by the orchestra
he transformed into a wonder of the operatic world.