And quiver with emotion and vibrato when they sing on the
ground? The title character of Xavier Montsalvatge’s El Gato con
Botas (Puss in Boots) does just that, in the delicious production
Gotham Chamber Opera has put together at the New Victory Theater just off Times
Square, under the direction of MoisÈs Kaufman, with the Tectonic Theater
Project creating the marionettes and other special effects. You hardly notice
the singers at times, good as they are; the Cat (and, later, the Ogre), singing
in the manner of Avenue Q, occupy all your attention.

On the evidence of this score, Xavier Montsalvatge, a Catalan modernist, was
more national than modern. El Gato con Botas, delicately played by
piano, strings, a few almost incidental woodwinds, is tuneful, angular,
swift-moving, with a Spanish rhythmic pulse. There is much witty scene-painting
and dancing, and the harmonies are attractive and piquant without falling into
clichÈ. The piece has character, but its scenic demands no doubt give opera
companies pause. There’s a lively cat who dresses very well—sword,
cape, plume, boots and, in an underwater ballet in this production, snorkel.
There’s a rescue from the river. There’s an Ogre who transforms
himself into a lion, a parrot, and a rat. (El Gato has evidently attended
Das Rheingold to pick up fairy tale stratagems—or else Wagner
had read his Perrault.) There’s a rabbit hunt, and lots of rabbits.

None of the magic gives the production team at the New Victory any
difficulty—scene-changing interlude music just provides more
opportunities for madcap special effects, and transformations are what the game
is all about. There is some kowtowing to the idea that it’s a kids’
show, and several matinees in English translation are part of the run (I
preferred to attend one of the performances in the original Spanish), but the
kids ae just a cover story. The sophistication of the humor, the charm of the
musical presentation, the dizzy delights of the occasion are much too good to
waste on kids, however much they are sure to love it.

Gotham has provided multiple casts. On opening night, Ginger Costa-Jackson
“voiced” El Gato, standing self-effacingly aside as the scrawny
marionette leaped to capture notes high in the air. Nadine Sierra sang a dulcet
princess; Craig Verm a heroically befuddled miller/marquis with a pleasant
growl to alarm any cat to heroic deeds; Kyle Pfortmiller made a smug monarch,
his head atop a tiny, strutting body; and Kevin Burdette was unusually serene
for an Ogre whose body starts in disassembled body parts, before he
comes together to threaten our feline hero. (You know the kids are
going to love singing, twirling, headless body parts.) 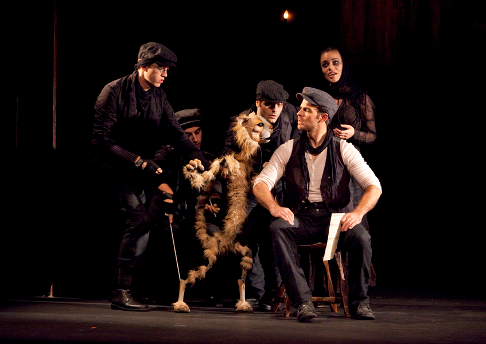 Where has this delicious little score with its spoof-ballets and arias been
hiding all these years? I guess it’s been waiting, like a princess in a
tower, for a company creative enough to set it free.

All photos by Richard Termine