Sadly, director Rufus Norris, designer Ian MacNeil, and conductor Kirill
Karabits, are desperately out of kilter in this miserable, in all senses of the
word, production of Mozart’s Don Giovanni.

A sparking, spluttering lighting rig occupies centre-stage as the opening
notes of the overture strike up; gradually it rises, resting askew, half-way to
the rafters, and there it dangles redundantly for the rest of the performance,
occasionally emitting a spark or flash. As the Stone Guest’s motif
sounds, there’s some vacuous brutality in the dark recesses, a nameless
women is brought before Giovanni to be abused, and we are clearly being told
that this is going to be a ‘nasty’ evening. Never mind that Da
Ponte’s Giovanni proves to be a rather ineffectual Casanova, not once
carrying out a successful seduction in the course of the opera. We are in a
modern degenerate dystopia, and Mozart and his librettist have clearly been
left far behind in the eighteenth century.

With this re-reading, a crucial aspect of the original is lost: namely, the
class conflicts inherent in the amorous entanglements and betrayals. The
erratic costumes don’t help. Dressed initially in jeans and scruffy
trainers, the Don dons an aquamarine eighteenth-century frock coat for his
opening sexual encounter, complete with antique wig; he then exchanges this
outfit for a slick red suit, aptly devilish over a black thug’s t-shirt,
as debonair man-about-town, gaily throwing parties for the plebs; and finally,
he slips into slobby black pyjamas adorned with the face of Christ and topped
off with a hallowe’en mask. Frankly, Masetto’s shiny blue Primark
suit is more stylish. This confused costuming destabilises our sense of the
power relations between the protagonists; and makes a nonsense of the
Masetto’s avowal, ‘At your service, sir’, when Giovanni
interrupts the wedding party. The Enlightenment’s strict stratification
of society, with its attendant modes of behaviour and codes of honour, has been
jettisoned, making the Don’s philandering seem like tedious
self-indulgence as opposed to radical subversion.

Hyperactive periaktoi, spun wildly in the urban gloom by masked marauders,
present us with fleeting visions of dingy street-corners, Elvira’s
Formica flat, a Seventies’ discotheque, as MacNeil tries in vain to
conjure up an air of reckless abandon and amoral depravity.

All this is a waste of good translation and some strong singing. Jeremy Sams
perhaps indulges in a few too many vulgar double entendres —
‘I’m tired of playing sentry/while he tries to force an
entry’ — but his wit sparkles and the rhyming couplets spill out
easily (perhaps a bit too profusely in the final scene), reminding us of the
fun and alertness of Mozart’s and Da Ponte’s buffa opera.
Sadly, at times it is clear that the director does not care what the cast are
actually singing about: when Zerlina tries to wile her way back into
Masetto’s affection after his beating at the hands of Giovanni’s
thugs (where does it hurt … here, or here …?), providing, one
might think, ample opportunity for some affectionate petting … there is
no chance of an ardent quiver or two, as Norris has seated her on a window
sill, 15 feet away. 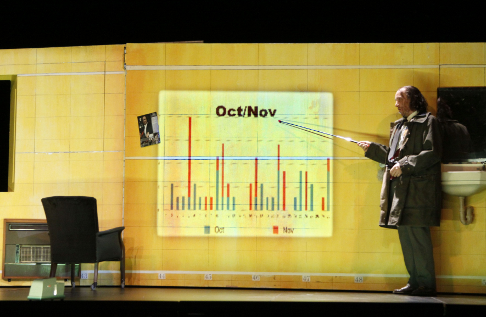 Part of the problem was the pace, or lack of it. Kirill Karabits never once
whipped up the necessary excitement and zip in the pit; the overture was
ponderous and fuzzy, the recitative almost static, and during one of the
greatest of operatic denouements, as Giovanni is sucked down to hell, the only
thing electrifying was the exploding circuit which descended and despatched
Giovanni to his death. Thus, Leporello’s catalogue aria — skilfully
and side-splittingly re-imagined by Sams as a spin-doctor’s statistical
presentation of his master’s conquests month by month, powerpoint,
spreadsheets and all — never generated enough momentum to suggest the
rush of the Don’s romping rampages, despite the artful timing and neat
delivery of Brindley Sherratt’s yobbish Leporello.

The cast tried their best to inject some frisson. The women fared best.
Deputising at the last minute for Rebecca Evans (afflicted with infected
sinuses), Sarah Redgwick was dramatically convincing as the scorned and
scornful Donna Elvira. Attired in a sharp red suit, her ‘Mi tradi’
was clear and penetrating, and she never once became the nagging harridan or
neurotic hysteric of Giovanni’s imaginings. Katherine Broderick has a
sufficiently hefty voice for Donna Anna, but at times it was rather shrill and
ragged, especially in Act 1. Sarah Tynan’s Zerlina was ravishingly sweet,
and she minced delightfully; her bright sound was consistently matched by John
Molloy as Masetto. But whatever happened to subtle innuendo: why, oh why, was
Masetto offered a boxing glove on a silver platter during Zerlina’s
faux-subordinate ‘Batti, batti’? 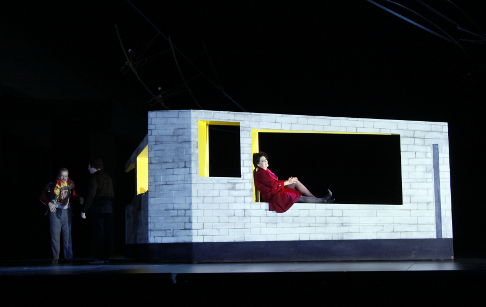 In the title role, Iain Paterson showed that he is a composed, accomplished
singer, able to vary and control his voice, a confident stage presence. Yet,
though the text was clearly enunciated and singing flexible and relaxed, he
didn’t generate sufficient testosterone-fuelled dynamism — maybe
the baggy Jesus t-shirt was to blame. Moreover, it was no fault of
Paterson’s that his ‘Senerade’, delectably sung, made no
dramatic sense: for, after a surfeit of comic crudities, Sams’ inserts
sentimental longings for an ideal love, ‘the one I miss the most’,
yearnings which are totally unconvincing. Mawkish projections of this
‘muse’ — assumingly an idealisation of female beauty —
did not help.

As Don Ottavio, Robert Murray produced a warm tone and presented a generous
heart as Donna Anna’s loyal, steady ‘protector’; he performed
‘Dalla sua pace’ with a consistently smooth line and striking
radiance. Unfortunately, his portrait of integrity and loyalty was not assisted
by the spangly, heart-shaped balloon he was forced to clutch, or the smooching
couples dancing in distance. Murray suffered a fair share of the
director’s indignities, encouraged inexplicably to remove his clothes at
the end of the great Sextet? Matthew Best lacked a monumental majesty in the
opening scene, but was suitable imposing at the close and made a striking
image, slumped, white-suited and pallid against a graffitied wall. The chorus
of identikit demons were, like their surroundings, unfocused and lacking
spark.

The closing scene begins with Giovanni and his side-kick, slouched like
drunken tramps on a grimy street, preparing a pavement picnic of takeaway
left-overs drawn from a discount-store carrier-bag: an image that ironically
rather sums things up — for, like the stale bread rolls they fling
contemptuously at the Commendatore, there really is a lot of garbage in this
production. The mock-fugue finale presents a simple moral: “if
you’re bad you’ll go to hell” — relevant in more ways
than one.

All photos by Donald Cooper courtesy of English National Opera