They are extreme
people, yielding unreflectively to extreme passions. Verdi’s score
expresses just that element (richly evident in its source, a blood-and-thunder
Gutierrez drama somewhat watered down for the libretto in order to appease
papal censors), and the singing should emerge with just this sort of
unreasoning passion. We may not believe that X loves Y, but we ought to believe
their minds are at fever pitch: “I’m going to hit that orgasmic
high note if it kills me.” No, you never hear a Trovatore like that any
more, but back when all theater was live theater and Il Trovatore was the most
popular theater piece on Earth, that’s the sort of excitement you could
hope for. If you want it now, you might want to check out the old RCA recording
with Milanov, Barbieri, Bjoerling and Warren. And that was an everyday
Metropolitan Opera cast!

The Met’s current David McVicar production in Charles Edwards’s
unattractive but functional sets (time period: Spain during a civil war —
any old civil war — there were plenty to choose from, but anyway
it’s not the one in 1410 where Gutierrez set it) is not without its
absurdities. (Why are all those floozies hanging around the soldiers’
camp, acting so very camp, when the general is formally reviewing his troops?)
But the job gets done and sets up the singers to play their parts with minimal
fuss. 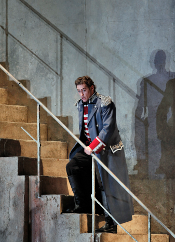 One particular thing struck me about the leading singers on this occasion:
None of them had their eyes glued to the conductor. Singers who sing to lovers,
tormenters, wounded children or God while keeping an eye on the baton the whole
time are often a necessary evil, a whimsy one grows used to, but it was a
pleasure to have the stars of this revival, though they never lost the beat
(and conductor Marco Armiliato never let Verdi’s powerful rhythms fade or
grow less than propulsive), looking at each other the entire night. They were
in it, they were on it. This is one of those professional touches you hardly
notice if you’re not looking for it — and are accustomed to too
many singers who can’t manage it. 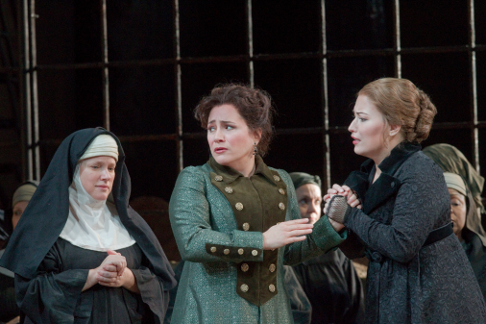 Patricia Racette as Leonora and RenÈe Tatum as Inez

You seldom get four top stars in top form in a Trovatore, but the opera
calls for just that. On this occasion no one sang badly but the glitter was
seldom gold. The men had it rather over the women; their voices seemed better
designed for singing Verdi. One felt in especially good hands with the Count di
Luna of Željko Lučić, who makes one think the great days of
the Verdi baritone live again. His “Il balen” was flawless, the
long, long line filling the house without effort, each note on the proper pitch
as though his throat could not consider putting it anywhere else. I don’t
remember there being quite so much bladework in this production, but
Lučić certainly startled the house when he drew his sword through
his hand, drenching it in blood, in his determination to possess Leonora. He
held his own in the confrontational duets and trios, too.

Marcelo ¡lvarez sang his offstage serenades beautifully (to the
accompaniment of a harp that never appeared — hey, guys, he’s a
troubadour, y’know?) but his double aria in the besieged fortress seemed
on the gruff side and he ran out of voice by the time of the dungeon scene.
Hoarseness seemed to be the problem; perhaps, like Franco Corelli, he should
conceal glasses of water around the set. His canteen in Act IV seemed not to
have been filled, and he needed it. He looked a romantic enough figure whenever
he did not stand in profile.

Patricia Racette’s Leonora is not the loopy teenager jumping around
the set played by Sondra Radvanovsky in this production: Leonora may be a
teenager, but she’s a lady of high Spanish birth, and she knows it;
Racette knows it, too. Spanish grandezza used to mean something, and
Verdi’s Leonora is that sort of dignified character. 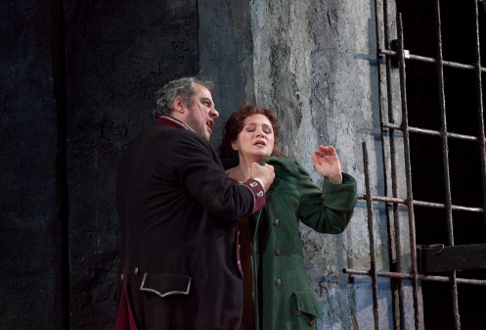 Racette is such an intelligent singer, so persuasive in her understanding of
predicament, that I wish I liked her voice better. Her instrument always seems
too small for the Met. She manages very professionally, but the voluptuous
floods of sound that other sopranos have brought to the role, the voice that
seems to define Leonora’s desperate heart and new-awakened passions, are
not at Racette’s disposal. Her “Tacea la notte” was
fascinating as vocal storytelling, but the tidal rise at its conclusion did not
overflow. “Di tale amor” was, as it usually is, a bit of a mess,
drawing no applause — Sutherland is the only soprano I ever heard sing it
flawlessly, and the rest of her performance was inert. (“Di tale
amor” is one of the few cases where I’d like to take his Orsinit·
the composer aside and say, sternly, “Maestro, this tune isn’t good
enough; go write a new one.”) The convent scene was no celestial flight,
and Racette seemed out of breath in much of Act IV; there were many thin notes
and others not precisely where one wanted them. Racette coped with the part but
she did not take joy in it, or exploit its opportunities.

Marianne Cornetti has the heft for Azucena, but it takes her an awfully long
time to warm up. Her “Stride le vampe” was loud but pitchless. Only
at the end of the “Condotta” did she give evidence of the ferocity
of a maddened Gypsy — her final notes actually brought forth the first
responsive “echo” I’ve ever heard at the Met! The dungeon
serenade, however, gave Cornetti place for her most beautiful singing of the
night.

Alexander Tsymbalyuk, as Ferrando, has a clear, persuasive young bass but he
bleats a bit. RenÈe Tatum was not the first confidante in my experience to make
us all wish Inez had more to sing. The monks’ offstage
“Miserere” in Act IV was downright heavenly, evidence of what those
guys can accomplish when they’re not swashbuckling around shirtless,
fighting with knives and spitting in each other’s faces, as they were
obliged to do at other times. 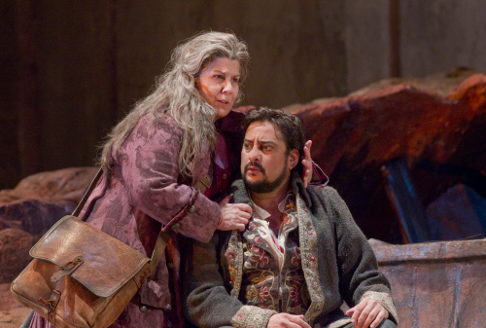 Marianne Cornetti as Azucena and Marcelo ¡lvarez as Manrico

The acting from all hands gave evidence of a bent towards melodrama. This is
not out of place in Trovatore, of all operas, but many were the moments
(“Ah sÏ, ben mio,” for example) when I felt the singers would give
Verdi his due and us a better time if they’d stand and deliver in the
old-fashioned way, instead of emoting like antsy banshees, losing their breath
and tripping over their own feet.

The omission of nearly all cabaletta repeats implied a desire not so much to
energize the occasion as to get it over with. That’s no way to do
Trovatore; Trovatore must breathe.

All photos by Ken Howard courtesy of Metropolitan Opera