It would be difficult to come up with a more contrasting
work than Mark-Anthony Turnage’s Anna Nicole, not simply, nor
even principally, from a gendered standpoint. Written in collaboration with
librettist, Richard Thomas, we have a new opera, which, as almost everyone by
now will be aware, is based upon the life of Anna Nicole Smith. Having spoken
to a considerable number of people over what must be approaching a year, I can
only recall one having heard of her, but apparently she is more celebrated in
other quarters. A woman who physically suffered and financially gained from
excessive breast enhancement, Smith ‘apparently’ died from a drug
overdose. Such is not the inspiration for Anna Nicole, in
that little effort seems to have been expended to produce an independent
artwork; rather we have something akin to a report of what the lawyers have
permitted Thomas and Turnage to reproduce. Apparently changes had to be made
very late in the day indeed, which may or may not be connected with the setting
aside in January of this year of Howard K Stern’s conviction for
providing Smith with controlled substances.

The music is more or less entirely without interest. One barely notices it,
beyond dubious pastiche, in the first act. At best, it aurally resembles
sub-sub-Broadway Weill, with hints of even further sub-sub-Berg. Closed forms
are the order of the day, but they come across as short-winded, formulaic even,
rather than polemical. Weirdly selected near-bits of Stravinsky are thrown in,
for instance, passages for woodwind almost straight out of the Symphonies
of Wind Instruments. And a parody that is barely a parody, of the Wedding
March from Mendelssohn’s A Midsummer Night’s Dream music,
covers over the cracks for Anna Nicole’s wedding to Old Man Marshall. The
music for the second act, supposedly more tragic in tone, is mawkishly
sentimental and, like everything else about the act, sounds over extended by at
least half an hour. (Both acts last for about an hour.) Puccini might just have
made something of this; Turnage cannot. Moreover, the writing for chorus, which
makes up so much of the first act, suddenly disappears. Doubtless the claim
will be that that ever so subtly marks a tightening of tragic focus. However,
like the increasingly tired feel of the sets — even Richard Jones and his
design team can only do so much with such material — the impression is of
an attempt to spin out something that has long since been exhausted.

The jokey-cum-profane libretto is worse, attention-seeking and utterly
banal. One tires of its childish provocations quickly, indeed within a few
seconds. Incessant swearing tires rather than shocks. Perhaps someone finds a
litany of alleged synonyms for breasts amusing; perhaps that would be the same
person who has a real-life interest in this sorry tale. Nothing is remotely
erotic; the opera is more akin to The Benny Hill Show. Anna
Nicole is not, to put it mildly, Lulu. The legal wranglings
arising from the deaths of Marshall and Smith might have made useful dramatic
fodder, but these are not explored. Perhaps it as well, for one cannot imagine,
to put it mildly, Anna Nicole becoming The Makropulos
Case.

I am suspicious of any work that seems designed to disallow almost any
adverse criticism. Stravinsky accomplished that magnificently in The
Rake’s Progress; yet, as so often, he seems to be a glorious
exception. Anna Nicole is not, etc. If one complains about the
‘musical’ element, one will doubtless be assailed as
‘Èlitist’, as if somehow wishing for the best were something of
which to be ashamed. Likewise all the popular culture elements. If one
questions the banality of the libretto, not only ‘Èlitism’ but
prudishness will also be alleged. Far from it, in my case: I find much of what
is said straightforwardly puerile, and not in the slightest shocking, let alone
hilarious. (An audience that laughs uproariously at crudely rhyming
‘profanities’ may need to get out a little more.) Puerility will
then doubtless be part of ‘the point’, but one can say that about
anything. This seems merely trashy rather than ‘about trashiness’.
Question the musical language, insofar as it may exist, and one will be accused
of ideological ‘Èlitism’: the horror — the ghost of
Darmstadt! 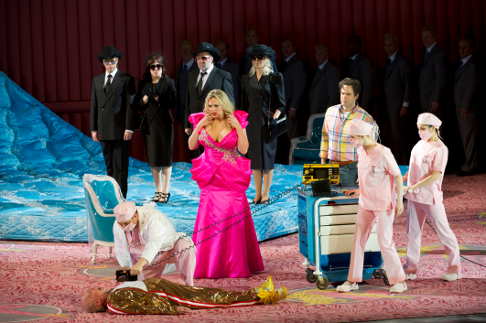 Whether dealing with music or text, true characterisation approaches zero;
everything is simply a matter of plot and situation. Is that the point? Again,
if so, ‘the point’ is surely wrong. Certain works can operate very
well, even achieve greatness, without conventional characterisation at their
heart, instantiating in its place an idea. However, Anna Nicole, is
not, to put it mildly, Fidelio. Not only Stern but even Anna Nicole
herself seems a mere caricature, without the caricature making a dramatic
point. Nor is there anything of interest in the way the story is told. Hopes
rise when Anna Nicole’s mother, Virgie, dissents from the way Stern tells
a part of the story — the death of Anna Nicole’s son, Daniel
— and it seems as though we might be in for some sort of re-telling from
a different perspective. It is really just a matter, however, of recounting her
dissent. Anna Nicole is not, to put it mildly, The Mask of
Orpheus.

The opera — it actually seems more like an attempt at a musical
— is also offensively and, frankly, childishly anti-American. Many of the
rest of us have noticed that capitalism is not a solely American phenomenon.
The use of ‘American’ accents, sometimes more successfully Texan or
indeed American than at others, is odd at best. We do not ask singers in an
opera with a French setting to sing as if they were Inspector Clouseau. It all
seems intended to make fun of a cultural setting of which the writers seem to
have little more knowledge and understanding than many of the rest of us.
Imagine the horror that would rightly be expressed, were someone to decide to
do something similar about India, Zimbabwe, Argentina, or indeed just about
anywhere else. This is, with apologies to Edward Said, Occidentalism that is
not even interesting.

Everything, moreover, seems to hang on the fact that this is ‘based on
a true story’. We seem to be led to believe — and I tend to believe
it myself — that it would be of no interest to anyone, if the story were
presented fictionally. At best, then, the work becomes reportage, concerning an
unfortunate soul to be cruelly mocked; for those of us who have little or no
interest in the life story of the aforesaid unfortunate soul, it is not clear
what the point might be. At least an opera such as John Adams’s Nixon
in China deals with a political event of considerable importance, whilst
remaining musically negligible. In ‘historical’ operas worth their
salt, the ‘history’ is not the sole point, but a spur to artistic
invention. Anna Nicole is not, to put it mildly,
L’incoronazione di Poppea. Perhaps worst of all, the treatment
of Smith herself and, still more, her son seems straightforwardly exploitative.
Is this a proper way to memorialise Daniel Wayne Smith? (I am unsure even
whether to mention him here.) Does he deserve to be served up as entertainment?
These people’s predicament is not, despite the presence of a press pack,
really explored, let alone analysed; it is just retold. 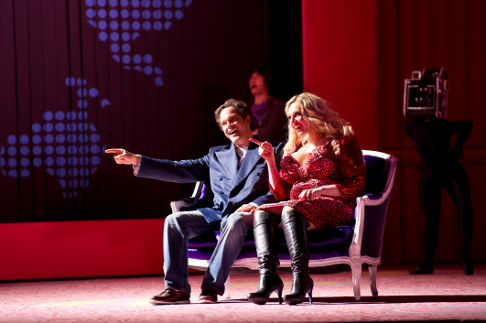 Gerald Finley as Stern and Eva-Maria Westbroek as Anna Nicole

Jones does what he can, with great attention to detail, and colourful sets,
especially during the first half. Moreover, the opera is truly cast from
strength, whether with respect to members of the Royal Opera Chorus, such as
the Four Lap Dancers and the Meat Rack Quartet, or the starring roles. The cast
is huge, putting one in mind of another recent Jones production, though
Anna Nicole is not, to put it mildly, The
Gambler. Yet the unsubtle amplification, whilst ensuring that every
word can be heard, crystal-clear, begins to tire as much as the melodramatic
antics of the plot. The ever-reliable Susan Bickley makes the best of what she
is given as Virgie. Alan Oke proves frighteningly credible in age as Old Man
Marshall and sings as well as we have come to expect — which is very well
indeed. Eva-Maria Westbroek gives a truly bravura performance in the
title role; the lack of characterisation is not hers. If Westbroek’s
gifts were wasted, then I do not know what the term would be for the
squandering of Finley’s resources. Antonio Pappano seemed to have the
measure of the score, marshalling his forces with tight rhythmic control. The
orchestra played with verve, as well drilled as one could imagine. To what end,
though?

Was the increasing high pitch of the promotion — it seems to have
worked, for performances have sold out — possibly related to a fear that
the music and text were so weak? One has to take risks with new works; it is
heartening that the Royal Opera was willing to do so. Let us hope that the next
new work will prove more fruitful, and perhaps — dare I suggest it?
— take the world, not just this country, as its compositional oyster.
Previous commissions include works by Henze, Goehr, Birtwistle, and Berio. Just
think of the time — I wish I could have been there — when
Stockhausen’s Donnerstag received its premiere at Covent Garden.
Better luck next time, I suppose…

All photos by Bill Cooper courtesy of The Royal Opera