With its
faux marquetry sets by Johannes Leiacker and spectacular astronomical
projections for the star-crossed and velvet-clad lovers (lighting by David
Cunningham, costumes by Jorge Jara), the stage is always a delight to watch
while this is on, no matter who is singing. I wish they’d use these sets
for operas I liked better—Donizetti’s Lucrezia Borgia,
say, or Bellini’s I Capuletti ed i Montecchi (to keep the story
on track), or Verdi’s Trovatore or Vespri, or
Auber’s La Muette de Portici, or Mercadante’s Il
Bravo, or Mascagni’s Parisina, or Schreker’s Die
Gezeichneten, or Korngold’s Violanta—just about
anything Renaissance-themed and at least faintly Italian. It’s entirely
too beautiful to leave it to rare encounters with sugary Gounod. 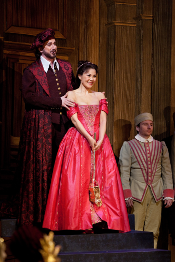 Dwayne Croft as Capulet and Hei-Kyung Hong as Juliette

The current revival was to have placed gallant young Polish tenor Piotr
Beczala beside Romanian glamour-girl soprano Angela Gheorghiu, but for whatever
reason (illness, she says) Madame Gheorghiu was a no-show. I do not
find the lady’s voice or her use of it persuasive enough to mourn her
absence. Standing in for her was Hei-Kyung Hong, who with all the looks, twice
the technique and three times the vocal gift of Gheorghiu, has never been a
candidate for stardom but, rather, a totally assured first-class house singer
of roles from Handel, Mozart and Verdi to Puccini and Wagner. If she has lacked
the spark of individuality that inspires cult, her dedication to
singing, to excellence, has made her a favorite with Met audiences for
twenty-five years. She is still a pretty woman and an able actress, albeit
lacking the little self-knowing and personal touches that a stage animal like
Natalie Dessay brought to Juliette when this production was new. Too, she might
be faulted for a certain coolness, a lack of passion—this Juliette does
not grow into a woman convincingly, but that is partly due to the omission at
the Met of her potion aria in Act IV. In any case, after a few nervous high
notes in the coloratura showcases of Act I, Hong settled into a lovely,
creamily sung performance. 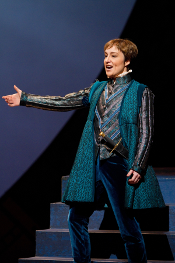 Beczala, a tenor I have admired as Edgardo and Lenski, has the Slavic fault
(I identify it with Hvorostovsky) of pausing between beautiful phrases that
should be strung together in ardent, breathless apostrophe, but his
“LËve-toi, soleil” was nonetheless a high point of a year of good
tenorismo. He was ably supported by Sean Panikkar’s Tybalt; Lucas
Meacham’s impressive Mercutio; James Morris’s rumbly FrËre Laurent;
and Dwayne Croft’s most distinguished Capulet. Mr. Croft is another of
those house singers who brings class to anything he sings, and he seemed very
much the host of this gala party. Wendy White was not up to her usual standard
as the Nurse—I could hardly hear he in the wedding quartet, and I was
sitting thirty feet away. Julie Boulianne, a mezzo with a developing
reputation, sang Stephano: She puzzled me, as she has in the past, not for the
occasional ringing and beautiful high notes, which are sure to please, but for
the off-pitch or scattershot phrases that led up to them. The conductor was
Pl·cido Domingo, and though his beat seemed draggy at times, he kept things
trundling and never threw the singers for a loop, no doubt remembering
occasions when he had to keep his eye on a vague baton. 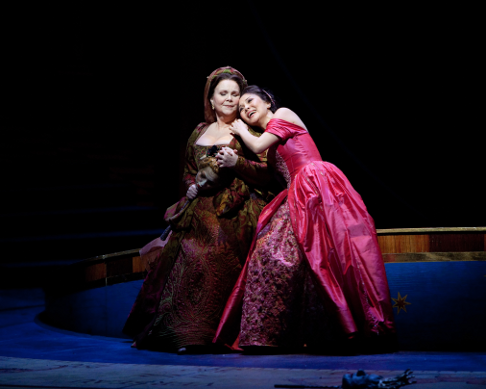 The crowd-movements were passable but the dueling was not. I would not say
this if I had not seen the street brawl and the deaths of Mercutio and Tybalt
done so very well in the old Met production of this opera, some of the most
realistic swordwork by elegant young men in tights I’ve ever seen on any
stage. The current version, which relies too much on knife lunges (that must
fall on the right crescendo to be effective), is unnecessarily awkward and
complex. The singers tried, but they could not make it seem natural. The Met
should try to find the guy who set this scene up in 1996 and entreat him to do
it again.

All photos by Marty Sohl courtesy of Metropolitan Opera