In fact, as they both surely knew, poets are thrilled
when a composer sets them to music and opera composers treasure a good
librettist, as no one did more than Strauss, deeply upset when the Nazis drove
his Jewish collaborators into exile.

In Capriccio, the opera they concocted, the artifice of the contest
is given a dramatic turn of the screw: Countess Madeleine, the elegant heroine,
is amorously besieged by a poet and a composer who are, therefore, at daggers
drawn. When the poet writes her a sonnet, the composer turns it into a song.
The poet fights back by inserting the piece in a poetic drama. An impresario
resolves to stage it with Paris’s leading actress, and Madeleine’s
brother, who is pursuing that lady, volunteers to appear in it (and pay for
it). There will also be dancers (since this is France) and even some
money-grubbing Italian singers (because … why not?), and a whole lot of
sophisticated banter about art, the arts, and the heart. Oh, and a bunch of
menservants between scenes to provide scabrous commentary on the affectations
of their betters. Plus a sleepy prompter to remind us that the public often
misses the real work being done backstage. It is music-drama as Viennese
pastry: Form follows anything but function, but the result is miraculously
filling. Strauss thus got a chance to bring his career to a perfect
conclusion—not a swan-song so much as a dessert—it was his last essay in the operatic form though he produced other music till his death six years later. 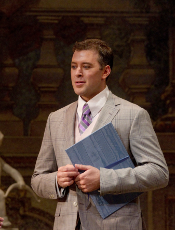 Strauss’s operas are of two kinds—most of them both at different
moments—the talky operas (Die Schweigsame Frau;
Intermezzo) and the lush, lyrical ones (Die Frau ohne
Schatten; Daphne). The best of them straddle the two states,
easily (Ariadne; Rosenkavalier) or uneasily (Salome;
Arabella). Capriccio is talky, but the talk is about matters
lyrical and the lyricism shines through at every opportunity, like a light
glowing through the cracks in ragged scenery. It’s a hefty,
two-and-a-half-hour intermissionless evening (when the Met last gave it, there
was an intermission, because Kiri Te Kanawa insisted), but it couldn’t be
by anyone but Strauss, and if you have the proper orchestra (the Met has, led
by Andrew Davis) and cast (the Met mostly has), it’s as enjoyable as a
long, heavy Central European dinner with many champagne toasts to accompany the
different courses.

One mild awkwardness: For reasons unclear (Robert Perdziola’s
costumes?), John Cox’s production in Mauro Pagan’s magnificent
trompe l’oeil drawing room has been set in Paris of the 1920s,
though Krauss and Strauss carefully filled the libretto and the score with
in-joke references to Paris of the 1770s, when they set it. The 1770s
was the era when (survivors said, after the Revolution) the sweetness of life
reached its peak, when Clairon ruled the stage and Gluck the opera. Clairon is
a character here, and there is much talk about Gluck and Voltaire and Rameau,
and of everyone appearing (or not appearing) at the royal court, none of which
makes sense in the republican 1920s. (And would one, in the latter period,
discuss drama versus music in the theater and never mention Wagner or Debussy?
In Paris?) So we are obliged to ignore the libretto at such times,
tragic as that is for so careful and literate a piece of work, and enjoy the
quotations from Gluck’s IphigÈnie, and sigh for the good old
days when opera direction made sense.

It may have been a mistake for me to listen to the first performance of this
run of Capriccio on the air, via the free broadcasting service
available on the Met’s web site: The voices all sounded impossibly
strong, the score wonderfully lush, and I looked forward to kicking back and
letting the Straussian surf waft me to Nirvana. In the theater, though, I found
the voices far less sumptuous, less physically present. The conversation was
favored; the lyricism faded out. Thus, for example, Joseph Kaiser, a young
tenor I’ve admired in other roles, sang Flamand the Composer ardently and
enthusiastically but made little that was distinctive of his role. Russell
Braun, as Olivier the Poet, might have been, in fact, conversing not singing
(and he does recite his sonnet). Peter Rose, who captivated the Met as Bottom
in Midsummer Night’s Dream among other roles, was a splendid
buffo presence without giving much sensual pleasure as La Roche, the
impresario. Sarah Connolly, as Clairon, perfection last year as the Composer in
Ariadne, was hampered by a costume and fright wig that made her look
like one of Samantha’s aunts from Bewitched, and sexy,
innuendo-fraught witticisms fell flat from such a figure. Stage direction that
distracted her every move with the witty dancing of Jennifer Goodman cannot
have helped her. The self-parody of Olga Makarina and Barry Banks as the hungry
Italian singers earned most of the vocal interest of the show. 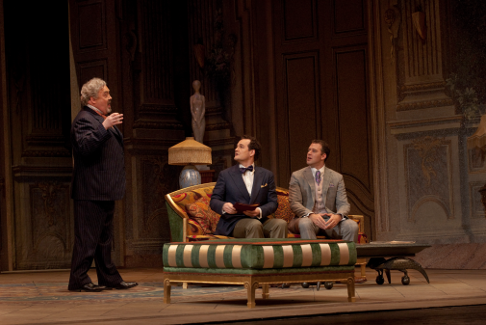 That leaves, as the plot does, the Countess Madeleine of RenÈe Fleming.
Capriccio is the Countess’s show, her chance to fill the shoes
(or shall we say culottes?) of Mozart’s Countess and Strauss’s
Marschallin and Arabella (a countess by birth)—all of them roles Fleming
has sung here with honor. Strauss, indeed, is one of the composers for whom she
has the greatest natural affinity. She looked splendid in the rather awkward
costumes—would a lady this classy really change into a glittery silver
ball gown to dine alone?—and her interactions in the salon scenes, her
amused, tolerant bewilderment at the two declarations of love, her grace to her
guests, her juggling of the situation were superbly handled—Kitty
Carlisle Hart set to music. We understood why all these people loved her, were
thrilled to be with her, to perform for her. She sang the varying phrases with
distinction, lyricism salted with witty banter.

So to the long final scene, where she is alone with a mirror, an invisible
mirror the director has hung on the fourth wall, so that she must peer into it
and, descrying her inner self, present that self to us. This scene is a
meditative tour de force, considerably more introspective but also
less intense than the meditation of ThaÔs, another
Fleming-with-a-mirror role: After all, her immortal soul is not at stake here,
whichever fellow she chooses by eleven o’clock the next morning. The
dalliance may not even last. Too, in the French manner, she may decide on
simultaneous affairs with both, or at least simultaneous flirtations. Fleming
has sung this meditation often, on disc, in concert, at the Met Gala. Perhaps
that is why, after a night on her best, most musicianly behavior, acting the
role and singing the words, she slips back into bad habits in the last minutes,
slurping and cooing where Strauss meant his music to be precise, dreamy, yes,
and well acted, but precise. It was a reminder of Fleming the gifted but
self-indulgent musician, who could have been but is not the great American diva
of our time.