(Doubtful, though, is Emilia Branca’s
tale that Donizetti complained of a Dulcamara with a “voice like a
goat.”) Notwithstanding the shortcomings of the singers, the score won
the day.

Could it have been otherwise? L’Elisir is so ingenious, so
bubbly, so amusing—and at the same time so moving and
heartfelt—that it proved a huge and instantaneous success. It charged
confidently into the international repertory and never lost steam. Nearly two
centuries later, it’s still almost impossible to botch
L’Elisir beyond redemption. And so it is with New York City
Opera’s production: carried by Donizetti’s brilliant music,
Romani’s witty and singable verses, an attractive production, and a much
more than “passable” tenor, the performance I attended delighted
even as it disappointed.

To a modern audience, the American Southwest during the 1950s seems a remote
and idyllic time, and Jonathan Miller’s 2006 production therefore neatly
fit the spirit of the piece; every detail was skillfully thought out and
Isabella Bywater’s sets and costumes were a delight. The locus is
Adina’s Diner, the gathering place of choice for a desert community near
a military base. Dulcamara rolls up to the gas pumps in a vintage hotrod,
sporting spectator shoes; Nemorino wears mechanics togs; the chorus consists of
greasers, fry cooks, soldiers and women in poodle-skirts and cat-eyed glasses.
Adina is a sort of Marilyn Monroe, Giannetta a less prominent Maureen
O’Hara. Belcore struts around in a Marine uniform and indulges in
Elvis-like pelvic gyrations.

The direction of this revival left much to be desired, and seemed motivated
more by a desire for cheap laughs than by an understanding and appreciation of
the text. As Donizetti’s biographer William Ashbrook observed, the most
groundbreaking feature of L’Elisir is that it is not mere slapstick, and
its lieto fine occurs because Adina realizes Nemorino’s true
goodness and sincerity; L’Elisir succeeds because there is real
emotional depth here.

With all this in mind, let it be admitted that Nemorino is not the sharpest
knife in the drawer; but for Romani he is a gullible, uneducated country lad
with a big heart. In the Miller production he is painted as borderline
developmentally disabled. He claps gleefully, jogs in place, bats imaginary
balls and jumps up and down as if he were five years old, much of the time
wearing a dopey expression. In line with disturbing current trends, excessive
stage action often interferes with some of the most important musical and
dramatic moments. During Adina’s solo in “Chiedi all’aura
lusinghiera,” Nemorino unwittingly spills salt, tossing handfuls around
as Adina tries frantically to clean it up. During her duet with Dulcamara
(dramatically the turning point of the opera), Adina reaches so deeply into his
pocket that his expression plainly tells us where her hand has wandered. In the
women’s chorus that begins Act II, a toilet flushes as they stand in line
waiting for the restroom, provoking a few nervous scatological giggles; later
Nemorino, sickened by his excessive consumption of the “elixir,”
runs to the same bathroom to be sick. 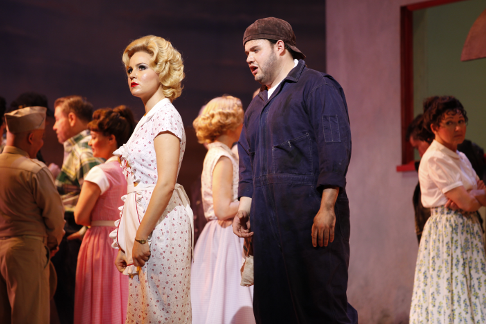 This is all a shame, but even this cloud of directorial dust, tenor David
Lomeli was able to show Nemorino’s passionate nature, his innocence and
his vulnerability. Indeed, only his artistry raised the afternoon out of vocal
mediocrity. Lomeli never lost sight of what makes Nemorino such a sympathetic
character, even as he acted the fool. He sang a wistful “Quanto e
bella,” and his impassioned solo passage, “Adina, credimi,”
in the first act finale tugged at the heartstrings. An achingly tender,
beautifully shaped “Una furtiva lagrima” earned him the loudest
cheers of the evening. Lomeli has a lovely, light voice with varying colors and
a good sense of how to use dynamic shading; there is a beautiful, genuine
Italianate squillo there too. He warmed up quickly after a slightly
underpowered start, and hit his stride with full confidence by the time of his
duet with Dulcamara.

As Adina, Stefania Dovhan was less than ideal casting. She is physically
very attractive, and the voice is intermittently beautiful and expressive, but
on the whole it is too harsh and inflexible for the role. Her voice
doesn’t have much color; her acuti, while on pitch, were rather
grating, and she does not handle coloratura cleanly. Though there were
isolated moments of real feeling, for the most part it was a flat, rather
riskless portrayal; the shift from fickle and vindictive vixen to loving
fiancÈe was a bit too abrupt and not very convincing. 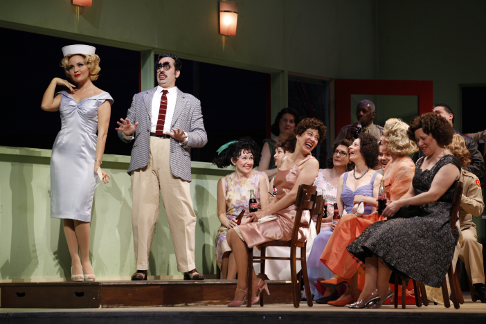 As for JosÈ Ad·n PÈrez’s Belcore and Marco NisticÚ’s Dulcamara,
all their comic silent-movie face-pulling and pelvic thrusts couldn’t
hide the fact that they sounded vocally undernourished and fudged the
coloratura. In his duet with Lomeli, NisticÚ’s vocal line drowned beneath
his partner’s. Brad Cohen conducted a brisk if at times somewhat hurried
performance. The orchestra sounded marvelous but for one horn mishap. The
chorus was well-rehearsed and in fine form.