John Zorn’s La Machine de l’Ítre (The Machine of Being)
began with an empty stage gradually filling with silent individuals dressed in
all-covering costumes resembling burqas. A man and a woman dressed modern
formal wear with stark white shirts and ties moved among the growing throng.
One of the burqa-d women darted away when approached, as if in fear, then
disappeared into the crowd, giving the proceedings something of the feel of a
video game. The actors in suits removed the burqas from two of the crowd to
reveal, first, a man dressed in a painfully brilliant red suit, and second, the
soprano dressed in a starkly white gown. It was unsettling to find a man under
a burqa, and he remained an uncomfortable presence on stage. A large cartoon
“speech balloon” rose out of the floor and into position just over
the head of the darting woman, adding to the video game impression. Film clips
of drawings adapted from those made by Antonin Artaud during his incarceration
in an asylum played across the balloon. These disturbing drawings complemented
the disjointed music as both became increasingly twisted and tortured. Finnish
soprano Anu Komsi, in her City Opera debut, did a fine job tossing her voice in
the air evoking a descent into madness in this free-form piece that lacked both
text and plot. 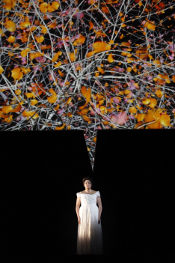 During a riveting entr’acte, Jennifer Steinkamp’s
stunning video display of a stylized forest moving through the seasons played
across the cartoon balloon. The video began with a wild profusion of pink
cherry blossoms mixed with yellow flowers and moved on to greens of summer,
then orange leaves falling and blowing and leaving a gray tangle of bare
branches. I was almost disappointed when the second Monodrama began.

But the gorgeous orchestrations of Schoenberg’s Erwartung
soon enveloped the audience, pulling us into the depths of the lonely
protagonist’s consciousness. A stunning blizzard of brilliant red leaves
fell on the stage for over half of the 30-minute piece. The glittering,
tumbling red was mesmerizing against the midnight blue backdrop. A dead man lay
in the middle of the stage with a knife protruding from his chest while the
tortured ravings of the soprano, sung movingly by Kara Shay Thomson, were all
that was needed to explain the drama—but several dancers provided an
unneeded distraction throughout this beautiful and compelling operatic
piece. 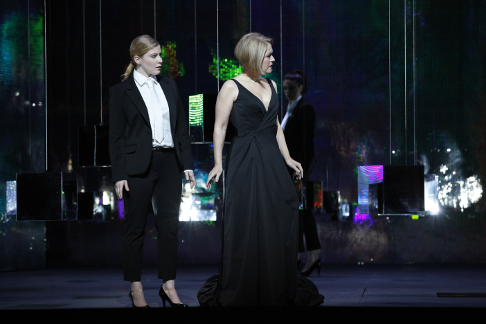 The final, longest, and most abstract Monodrama of the evening was
Neither, set by composer Morton Feldman to a text by Samuel Beckett.
The mystical and complex orchestral part was richly complemented by the
continually evolving splashes of intense colors and shapes created by the laser
and holographic effects (after work by the innovative laser artist Hiro
Yamagata). Mirrored one-foot cubes moved and revolved, sending flashes of color
and penetrating lights across the house. The singer and the several dancers
reacted to and interacted with the cubes, as the singer seemed to try to find
some connection with the other people. Cyndia Sieden’s voice sailed above
the orchestra, intoning the text in a near monotone that never left the highest
extremes of the soprano range.

The City Opera is certainly to be commended for stepping beyond the
traditional operatic comfort zone to present these three fascinating and
compelling performance pieces. It bodes well for the future of opera as a
living art that this company has brought such work to its audience.