Whether such a thing is possible
(Wilt Chamberlain notwithstanding) or not is for others to debate. The more
interesting question might be who DaPonte and Mozart had in mind as they set to
work on unmasking the Spanish grandee.

Early in the 17th century, a Spanish monk by the name Tirso de Molina wrote
of a certain Don Juan more reprehensible than is probable and so much less than
worthy that he is cast into fiery hell pits. Scores of offshoots (Moliere,
Byron, E.T.A. Hoffman, Pushkin, and Kierkegaard count among those that
succeeded with adaptations) came out of Molina’s Don and it is
probable that this is the historical figure from which Mozart’s Don
Giovanni is derived.

About a century later, there appears on the scene Giacomo Girolamo Casanova
de Seingalt. You know him simply as Casanova. Mozart’s take on Giovanni
so interested Casanova — and his station as a man that set off on serial
dalliances was so established – that he was said to have approached
(unsolicited) DaPonte to advise him on the libretto; he may have sat in on the
opera’s premiere to wit. But Casanova’s reputation was not that of
a true libertine. By his own admission in his 12 volume mega-autobiography
L’histoire de mon vie, he was but a mild womanizer: he lists a
paltry 122 escapades and often the sole faculty he required from a woman was
good conversation.

It remains that DaPonte and Mozart shaped Giovanni as a composite of these
men, adding a soupcon of super-physical feats here and inflating the
drollness (in the spirit of dark comedy, or drama giocosa) driving his
depravity there. From this, productions and directors have room to play with
the degree of redeeming value left their Giovanni. Florida Grand Opera’s
production seeks to bend the picture of Giovanni to make him a more sympathetic
anti-hero, to explain his actions as a function of psychodynamics and therefore
something all men must trespass through: commitment-phobia or its less severe
cousin, proverbial cold-feet.

The festive ambiance in the air on April 16, opening night, was the likes of
which are felt when things are on an upswing and that is where FGO finds itself
in recent seasons. The company’s operatic high notes peaked in 2010 with
exciting new productions, interesting new talent and efforts to reach out to
the opera community at large (opera luminary Ira Siff is on hand and this is
John Pascoe’s Giovanni). So, opera interest is heightened this
month with this Giovanni production (courtesy Washington National
Opera) and, in repertory, David DiChiera’s Cyrano showing
through the end of the month. 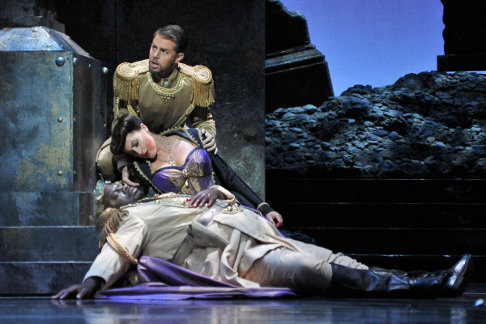 Ottavio and Anna (Bidlack and Wagner) by the fallen
Commendatore (Robinson)

Before a single note played, the curtain rose to Giovanni (David Pittsinger)
and the circling “ghost of girlfriends past” behind a soft screen
— what resulted was a field-of-sight dark, smoky, hazy, and
impressionistic — a feast for the eyes before other senses were
tapped.

Pascoe’s sets (arid and rustic in flavor with corresponding studding
and fittings on frames and doors), offset costumes (those of Masetto and
Zerlina were especially decorative) and the wielding of revolvers gives the
story extra personality and takes the audience to a Spain feeling the remnants
of Ottoman influence. The final scene at Giovanni’s castle, with
vault-like doors at the entrance, was another glance into Pascoe’s
imagination: the Commendatore, forces of repent coursing through him, pulls
Giovanni (and zaps a Leporello too close for comfort) in like a magnet. That
strobe lights, so often a gimmicky excess, were trained at center of
symmetrical doors had something to do with their effectiveness. Pascoe’s
costumes were of gorgeously decorated heavy and reflective fabrics — in
purples, blues, and blacks, embroidered and streaked in gold. 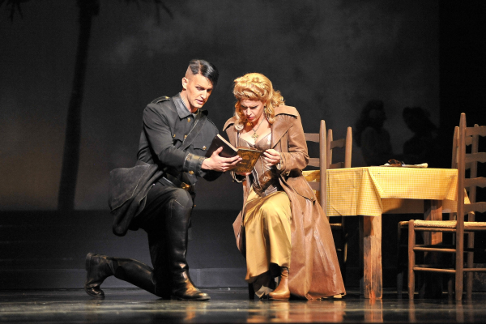 Pittsinger mostly fulfilled his promise to “inhabit” Giovanni,
stylizing his performance satisfyingly. Giovanni does some pretty daft to
risquÈ things per Pascoe — urinating on the Commendatore’s statue,
performing cunnulingus on one of the members of the band in the last act
— and Pittsinger went at these gamely. All the fight scenes came off
well, with special kudos due the swordplay and tug-of-war (Fighting Director
Bruce Lecure and Choreographer Sara Erde — in her first assignment with
FGO – collaborating) with Ottavio and friends (four in total). Giovanni’s
music sits very well in Pittsinger’s voice; he shaded and modulated
compellingly and, at times, beautifully — his “Deh, vieni”
placed in the latter category.

By the sound of it, Tom Corbeil — whose voice is phonogenic — is
likely to make the switch from Leporello to Giovanni not far down the road.
Corbeil had fun with Leporello’s music and the Pee-Wee Herman hairdo (Wig
and Makeup by Chris Diamantides) he sported was in keeping with his
anxiety-stricken servant. The Donna Elvira of Georgia Jarman was as irritating
to the Don as could be imagined; Pascoe put a tool in the hand of Elvira for
that purpose — evidence of the grandee’s misdeeds and complicating
Giovanni’s relationship to Elvira and the Commendatore. Elvira carries a
swaddled infant throughout the opera. Jarman, in her first outing with FGO,
sang a “Mi tradi” with potent force and some lovely spun high
notes. 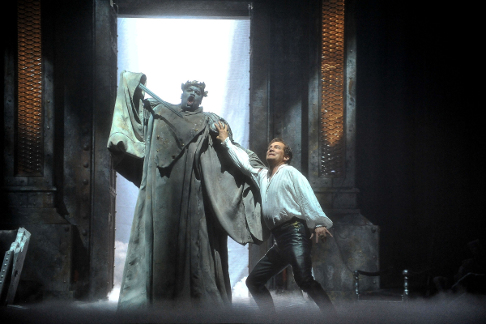 Morris Robinson is such a presence — he (and Pascoe) made the
Commendatore a pivot point in this production. Right from the get go, he pulls
out a pistol during the duel, grazing Giovanni on the arm (a wound that is hard
to heal throughout the opera). Heard at other points in his career in other
roles, Robinson’s voice is remembered for its sheer size; Mozart’s
music exposes it as glorious.

In his arias, Andrew Bidlack (Don Ottavio) sang winning phrases with a
pleasant sounding mid-section. As Ottavio’s betrothed Donna Anna, Jacqueline
Wagner won the audience over with a strongly felt “Non mi dir.” The
Masetto this evening, Jonathon G. Michie, exhibited exemplary acting,
nonplussed and peeved as he was over his Zerlina’s infatuation for the
Don. Brittany Ann Renee Robinson (Zerlina), in her FGO debut, was a distracted
vixen with a light soprano that carried a light “Batti, batti.”

FGO resident conductor Andrew Bisantz — carrying an ultra-sensitive
baton for vocalists this evening– and orchestra found their most select
playing marks in the sweeping interplay of winds and strings. Caren Levine
provided harpsichord continuo. FGO’s chorus (with John Keene as Chorus
Master) did a fine job on all fronts — busy as they were in non-singing
tasks (they riot across the stage to open the second act). Erde made things
interesting for the minuet by turning the program into something of a dance
school.

It’s hard to tell if Giovanni came off as more likable, or even more
relatable, this time. This time, like most times, there is only one way to
defrost Giovanni’s feet.