Arresting, and at times disturbing, it may be, but the symbolism is unabashedly
transparent. Red = blood; black = evil; gold = power. Thrones in gilded cages
remind us that power corrupts and ambition destroys; the roadside standpipe at
which Macbeth pauses to erase the blood of battle from his hands reveals
man’s bleak brutality. 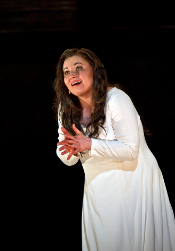 That’s not to say that Anthony Ward’s designs, all looming grey
stone and shadowy skies, are ineffective; indeed the stage space powerfully
suggests both the magnitude of the Macbeths’ ambitions and the increasing
claustrophobia as the net closes in. We are as mesmerised as the Scottish
thanes by the glamorous glitter of the royal couple’s eye-splitting gold
lamÈ gowns. Dramatic streams of light cut through the darkness of Duninsblane
Castle, threatening to expose the criminals’ handiwork, or perhaps to
represent the stabs of moral conscience which beleaguer the guilty pair, a
device employed most effectively during Macbeth’s “is this a dagger
…?” hallucination.

So, visually the intensity never wanes. And, indeed Verdi’s reading of
Shakespeare’s tragedy, in which the chorus looms so large, perhaps
invites hyperbole and melodrama. Why have 3 witches when you can have 25?
Similarly, while we may wonder why Shakespeare insists on the presence of a
third, mute, murderer, at the assassination of Banquo, Verdi gives as a whole
herd of henchmen, revelling in their butchery. Lloyd promptly takes her cues
and, exploiting the significantly enlarged choral forces, makes the
witches’ malicious intent the driving force of the drama, their scarlet
headdresses signifying their blood-thirsty intentions. They are omnipresent:
they help Fleance to evade his would-be assassins; they deliver Macbeth’s
letter to his wife. If they are not steering the action, they are shifting the
furniture.

Moreover, the innovative orchestral score strikingly conveys dark depths and
deeds, and from the opening raspings of the bassoons and brass in the prelude,
Pappano whipped up and sustained a sonic canvass to match the stage vision. He
superbly controlled the musico-dramatic ebbs and flows, bring great energy to
the accompaniment figurations, while elegantly highlighting the significant
strands within the dense textures.

Making her role debut as Lady Macbeth, Ukrainian soprano Luidmyla
Monastyrska was a commanding presence. When she made an unscheduled ROH debut
as Aida in March, many commentated on the sheer size of her voice, and
Lloyd’s production positively invited her to exhibit her vocal muscle to
the full: I don’t think I’ve ever heard a soprano ride above a
large ensemble with such force and potency – indeed, one would be
concerned for her vocal health and longevity had it all not seemed so
effortless. She began with an astounding confidence which suggested she’d
been singing the role for a lifetime; she ascended to the stratosphere with
ease and fleetly navigated the coloratura, while her lower register was
burnished and sensual. Verdi’s Lady Macbeth could seem monstrous –
an emblem, and agent, of the witches’ designs. For example, she is
actually responsible for planting the seed of the murderous plot against Banquo
in her husband’s mind, whereas Shakespeare’s queen is kept in
ignorance. However, in a recent interview, Monastyrska explained that she
senses Lady Macbeth’s guilt troubling her, almost immediately after the
death of Duncan. And it is to Monastyrska’s credit that she is able
convincingly to bring some complexity to a role which could become a
one-dimensional portrait of sexual power; her Sleepwalking Scene was a
sensitive exploration of motivation and psychology.

Simon Keenlyside was, by contrast, all subtlety and self-interrogation,
though never lacking in focus if not quite matching his wife for decibels.
Pony-tailed and sporting a goatee beard, his Macbeth is a portrait of
self-doubt, the elation of victory on the battlefield and elevation at court
swiftly giving way to the horror of his own moral devastation. While not always
mastering the span and arch of the Verdian phrases, Keenlyside’s
beautiful tone, carefully nuanced, movingly suggested the anguish of every
twist and turn of Macbeth’s psychological brooding, as he swung between
soulless defiance and poignant regret. Seemingly inhabiting opposing moral
spheres, it is not surprising that the couple are found sleeping in separate by
the rebellious Scottish refugees who burst into the bed chamber in Act 4.
Perhaps greater erotic tension will grow between the pair as the run
proceeds. 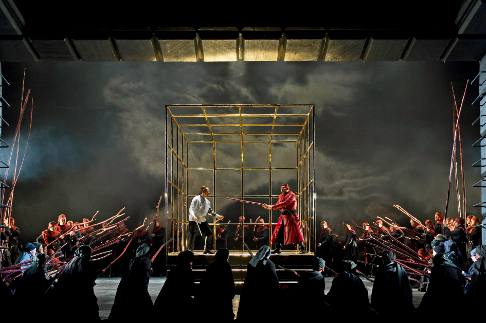 Simon Keenlyside as Macbeth and Dimitri Pittas as Macduff

Of the rest of the cast, bass Raymond Aceto was a weighty Banquo, if
occasionally uneven, while Dimitri Pittas, though firmer and more consistent of
tone, was a rather wooden Macduff whose intonation tended to drift sharpwards.
Both would have been assisted by some more attentive direction. Elisabeth
Meister, a Jette Parker Young Artist, demonstrated an intelligent appreciation
of the musical and dramatic demands of the role; she’s an intelligent
singer who knows when to bring forth the finer details and when to blend with
the ensemble. The huge chorus co-ordinated well with the pit, and were
particularly powerful in the Act 1 concertante, driven by Pappano to a stirring
climax. The witches’ strange whining tone was an unnecessary distraction,
though.

Overall, there were many compelling moments during the evening, not least
because of some outstanding singing from Monastyrska, but the production does
not entirely convince.

All photos by Clive Barda courtesy of The Royal Opera